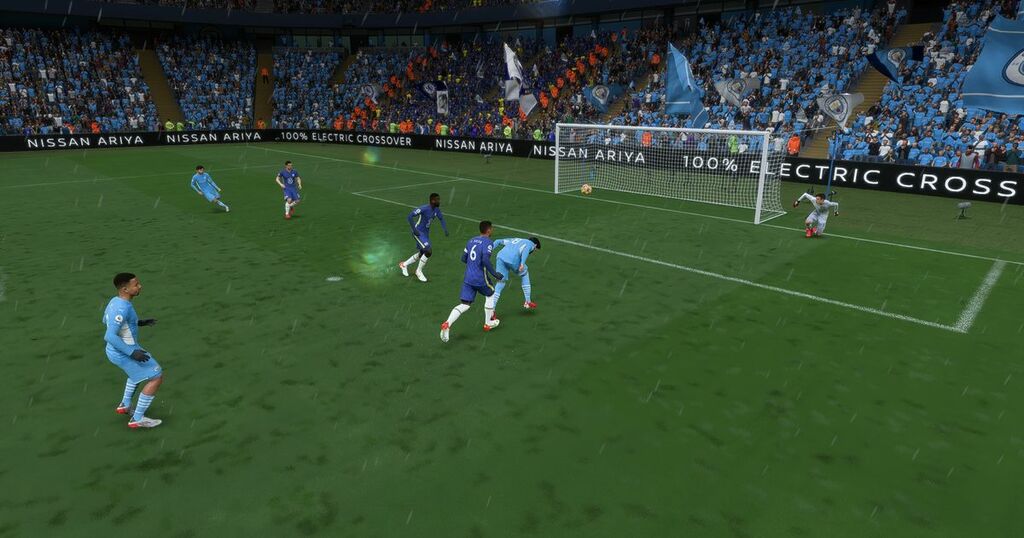 Manchester City could extend their gap at the top of the Premier League to 13 points this weekend, as they host Chelsea on Saturday afternoon.

Pep Guardiola's side will know a win against Chelsea this lunchtime could all but end the Blues' title hopes with the gap between the two sides getting larger each week.

Oleksandr Zinchenko, Phil Foden and John Stones all remain doubtful for the City squad on Sunday, but after his return to the first team in their last game, it looks likely that Kyle Walker could start.

Raheem Sterling also looks set to start, with the winger being named as the Premier League Player of the Month for December after his five goals and one assist during the final month of the year.

So, what line-up will City select? And what could the final score be?

We used FIFA 22 to get a score prediction for City vs Chelsea on Saturday and this is what happened...

We predict that City could set up in a 4-3-3 formation, with their line-up as follows: Ederson; Walker, Dias, Laporte, Cancelo; De Bruyne, Rodri, Gundogan; Jesus, Silva, Sterling.

We predict that Thomas Tuchel's side could set up in a 4-3-3 formation, with their line-up as follows: Kepa; Azpilicueta, Silva, Rudiger, Alonso; Jorginho, Kovacic, Kante; Mount, Lukaku, Werner.

An early flourish of chances saw Man City take the lead after just five minutes when Joao Cancelo was on hand to tap home from close range.

Cancelo's original cross was cleared into the path of Gabriel Jesus on the right-hand side of the box, and the Brazilian did well to anticipate the challenge from Marcos Alonso and skip past the Spaniard towards the byline.

Jesus drilled a dangerous cross into the box which was met by Cancelo at the back post who remained forward after his earlier cross, and the defender was left unmarked as he tapped into an empty net for the lead.

Chelsea grabbed the equaliser just five minutes later though, with Mateo Kovacic scoring in almost identical fashion to his wonder-strike against Liverpool.

Mason Mount's corner was headed clear at the near post by Thiago Silva, but only as far as Kovacic on the edge of the box, and the Croatian set himself up to fizz a volley back at goal, nestling into the bottom corner and past Ederson to put the Blues level.

The thrilling first-half continued to produce goals on the 30-minute mark when Ilkay Gundogan put City back ahead with a stroke of luck.

The German midfielder shook the post with a long-range effort, leaving Kepa out of his goal after he leapt to his left, but fortunately for City, the ball rebounded off the post and back into the path of Gundogan who headed into an empty net.

Chelsea fought back once again though, and Timo Werner found the Blues' second of the half to make it 2-2.

Tuchel's side found themselves on the counter-attack after a smart interception in midfield, and N'Golo Kante took aim first, but his shot was met well by Ederson.

The keeper could only push it into the path of Werner though and the German fired home the rebound to level the score.

The second half was more tense than the first as neither side wanted to sell themselves short at the back, but it was the home side who regained the lead when Kevin De Bruyne headed home.

Cancelo was involved once again when he was sent down the left after a quick exchange of passes with Gundogan, and the Portuguese defender's inch-perfect cross was met by the bursting run of De Bruyne who headed past Kepa to put City 3-2 up.

Ruben Dias was shown a second yellow card in the last minute after fouling Romelu Lukaku on the edge of the box, but Mount's free-kick was poor, giving City victory in what was a thrilling simulated game.

Here are the full-time match stats:

FIFA 22 predicts that the face-off between the Premier League's top two sides could produce a thrilling display on Saturday, with the simulation predicting City will take the lead on three different occasions and overcome Chelsea in a close affair.

What do you think the final score will be in the real game? Let us know in the comments below.

FIFA 22 is the latest game within EA's popular FIFA video game franchise, which was released worldwide on Friday, October 1, 2021. The game is available now on all platforms including Xbox One, PS4, PS5, Xbox Series X, Xbox Series S, Stadia and PC.