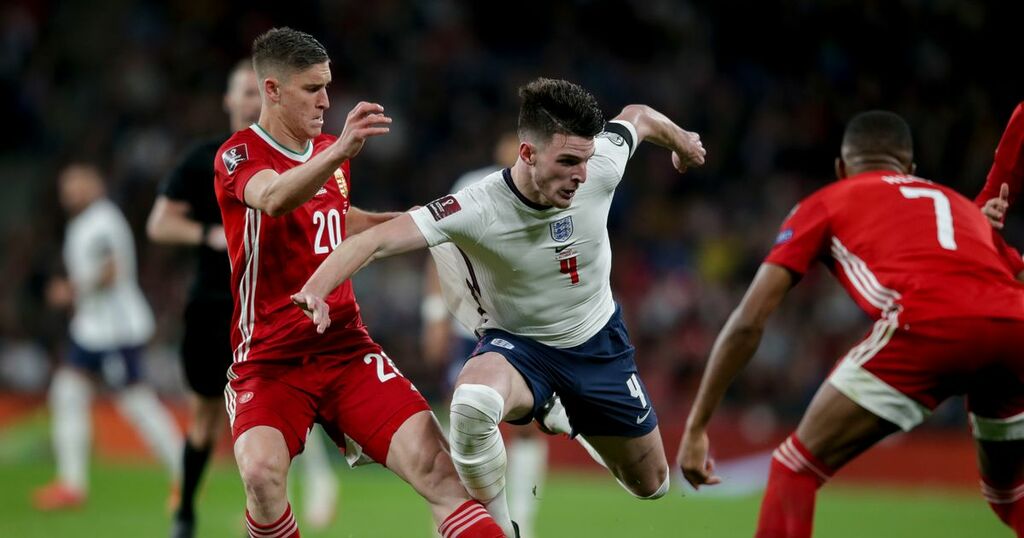 Gareth Southgate's England team had a distinct Manchester City flavour to it during Tuesday's 1-1 draw with Hungary.

Five City players started the World Cup qualifier for the Three Lions; John Stones and Kyle Walker in defence, Phil Foden in midfield and Jack Grealish and Raheem Sterling on the wings.

Southgate employed a 4-3-3 formation - as City counterpart Pep Guardiola does - that featured one holding midfielder rather than the two he deployed during the recent European Championship.

Therein lies the difference between City and England. Playing at the base of a midfield trio, Declan Rice struggled to live with Hungary's intense pressing.

It's a facet of the game that Rodri has mastered at City, although that did not happen overnight.

It would be unfair to suggest that Rice had an outright bad evening at Wembley. His general performance was good, as he swept up in front of the defence and progressed the ball forward as he does so effectively for West Ham. A pass completion rate of 98% is not to be sniffed at.

But, unusually for a team playing England away from home, Hungary pressed England high up the pitch. This caused numerous problems in the first half, as it created a number of chances for the visitors and led to the Luke Shaw high foot that gifted Hungary a penalty.

Without his trusty Euro 2020 sidekick Kalvin Phillips playing alongside him in midfield, Rice often looked isolated in the middle of the pitch. He found himself unable to break the lines with opponents blocking the passing lanes between himself and the attack.

For his club, West Ham, Rice lines up in a two-man central midfield alongside Czech Republic international Tomas Soucek. As with Phillips at the Euros, Soucek's defensive abilities allows Rice to be more adventurous with his passing and to join attacks. If West Ham are pressed or counter-attacked, then Rice rarely has to deal with the situation on his own.

Both Soucek (26) and Phillips (25) use their experience and age to keep the 22-year-old Rice in check and to coax him through tricky situations. Against Hungary on Tuesday, that safety net was missing and it showed.

Does this all sound a bit familiar? It should - it's near enough exactly what Rodri went through during his first season at City.

2019/20 was a steep learning curve for the young Spaniard, as he struggled to adapt both to the rigours of playing in a Pep Guardiola side and the intensity of Premier League football.

Whenever he played at the base of City's midfield, the absence of Fernandinho became painfully obvious as Rodri looked overwhelmed and off the pace.

But, with time, he learned. Fast-forward two years and you'll struggle to find a Blue that would rather see Fernandinho - as much as we all love him - make the teamsheet ahead of Rodri. Having found ways to avoid pressure despite his lack of pace, by adjusting his positional sense and passing abilities, Rodri is fast becoming Pep's new Sergio Busquets.

It would be ridiculous to say that over the next few years Rice couldn't adapt and develop in a similar way. However, if the rumours that City are interested in the England man are true, then a move for him simply doesn't make sense.

Looking past the fact that Rodri is brilliant and City have absolutely no reason to replace him, signing Rice would be like rewinding the clock to 2019. Playing as a lone holding midfielder in a 4-3-3 system is very different to having a defensive-minded buddy alongside you.

Every season, City face a handful of teams that press them intensely. Last season those teams included Liverpool, Chelsea and Borussia Dortmund. By and large, Rodri coped very well, as he did again at Anfield before the international break.

With all due respect to Hungary, their press is not as good as the aforementioned clubs but Rice still struggled.

When it comes to navigating opponents that try to disrupt City's possession game by pressing, Rodri has worked hard to be the guy City need him to be. Ditching him next summer for Rice, a talented player who would need time to re-learn his role, would be foolish.

Do you think City should stay clear of Declan Rice? Follow City Is Ours writer Alex Brotherton on Twitter to get involved in the discussion and give us your thoughts in the comments section below.