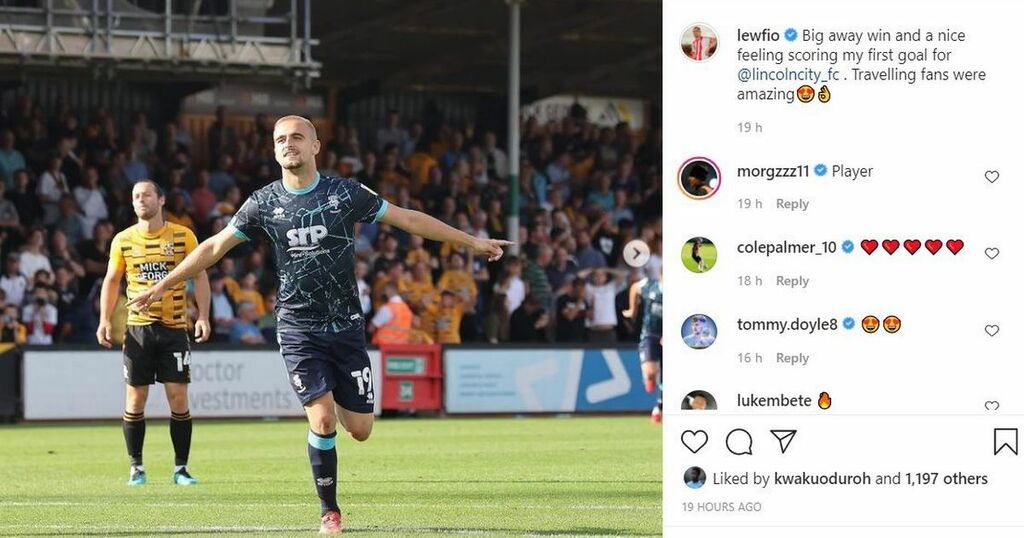 Midfielder Fiorini joined Lincoln on loan for the season after a productive year in the Netherlands with NAC Breda, and has had to wait patiently for a chance in an Imps side who reached the play-off final last year.

So far, Fiorini's only starts have come in the EFL Trophy, but he has come off the bench in Lincoln's last four League One games. Against Cambridge on Saturday, Fiorini added the gloss onto a big team performance with a stunning goal in a 5-1 win.

After a teammate ran from midfield, Fiorini picked up the ball on the edge of the area, taking a touch to control before curling a stunning effort into the top corner.

After the game, Fiorini posted: "Big away win and a nice feeling scoring my first goal for [Lincoln]. Travelling fans were amazing."

Fiorini's manager Michael Appleton praised the midfielder after the game, saying: "I expect that from Lewis, what you’ve seen today I’ve seen in training every single day. The players were joking about it on the sidelines, knowing that once he pulled the trigger, they knew it was going to be a goal.

“He’s got that quality in his game, that’s why we brought him on.”

Elsewhere in City academy, the under-23s continued their fine start to the season with an eye-catching 4-1 win over Chelsea. Palmer assisted two injury-time goals for Sam Edozie and Tai Sodje, to add to an early goal for Sodje and a 78th minute James McAtee penalty to turn the game around after Chelsea took the lead.

Brian Barry-Murphy's side are top of the Premier League 2 after four games, with impressive wins against Blackburn, Manchester United and Chelsea to add to a draw at Liverpool.