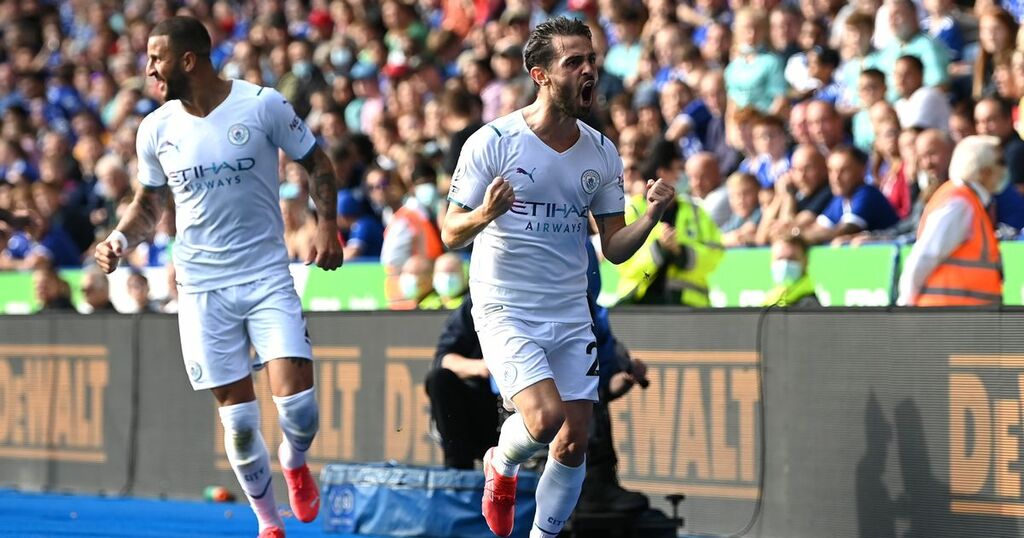 A Portuguese superstar turning in a match-winning performance to the delight of fans who feared he would be playing somewhere else this season.

Yes, Bernardo Silva was absolutely magnificent as he scored the only goal in Manchester City ’s 1-0 win at Leicester City on Saturday, where the travelling contingent lapped up every last drop of his 62nd-minute strike.

Who on earth else did you think we were talking about?

Naturally, there was plenty of focus upon how a certain compatriot of Bernardo’s got on as he returned home on the other side of town, but the two-way outpouring of joy and affection was something to behold after the game’s decisive moment.

Snapshots of football games are not windows into the real lives of the players we cheer and shout for, talented human beings we often unfairly pin our volatile emotions upon.

But when Bernardo darted off in celebration towards the away fans, he looked so happy and that felt so good.

There is no reason to doubt the reports that the former Monaco playmaker was not altogether content with life in Manchester over recent months. If he is personally unhappy, a goal in a Premier League game probably does not change that fundamentally.

Nevertheless, the ball crashing into the net - the type of scruffy goal it was starting to feel like City were incapable of snatching in a keenly-fought contest - sparked scenes of unbridled elation. For fans to be able to share that with Bernardo again was wonderful and he seemed to enjoy it every bit as much they did.

When the playmaker’s future was up in the air during the transfer window, Jack Grealish ’s club-record arrival seemed to add weight to the case that Bernado’s time at City was up.

Yet, at Leicester the pair performed thrillingly in tandem, providing a dual-threat down the left flank that the Foxes struggled to contain.

Bernardo leaving Caglar Soyuncu splayed out on the turf in the sixth minute before crossing for Gabriel Jesus to head too close to Kasper Schmeichel set the tone for a dominant opening from Pep Guardiola’s team.

Even though the City boss named an unchanged XI for a third consecutive game, his set-up during the opening exchanges caught Leicester on the hop.

Guardiola was keen to stretch the pitch, with Bernardo often lining up as a left-sided forward in possession, with Grealish outside him as City had five attackers strung out to occupy and outnumber Brendan Rodgers’ men.

Grealish and Bernardo are each sublime with the ball at their feet and having such supreme dribblers exchanging possession felt unfair at times, although Rodri and Aymeric Laporte probably felt similar when they were forced into first-half yellow cards as Leicester countered with intent.

In a different tactical approach, Bernardo might have been shuttling around next to Rodri, putting out those fires. As it happened, Guardiola handed him a relatively unfamiliar attacking brief and he was City’s best player. If he had left, the Premier League champions would have struggled without his versatility on days like this.

Bernardo’s discipline allowed Grealish to rove from the left flank, often attracting several defenders and displaying a smoother rhythm more in tune with his City team-mates than previously. That will only improve as the weeks flash by in this busy period of the season.

Inevitably, Grealish was involved in the winner, cutting back for Joao Cancelo’s deflected shot that Bernardo snaffled.

At full-time, the former Aston Villa favourite lapped up acclaim as the City faithful hollered his name - a hero everywhere he goes. Bernardo sat on the turf, hands on his knees and sucking in air after a typically tireless showing.

As in the game itself, their images dovetailed perfectly. Grealish and Bernardo’s fledgling partnership is one even Guardiola might have accepted he would never get to see. It could prove to be a difference-maker for him this season.

Were you excited by Bernardo Silva and Jack Grealish's partnership against Leicester? Follow our City Fan Brands Editor Dom Farrell on Twitter to get involved in the discussion and give us your thoughts in the comments section below.