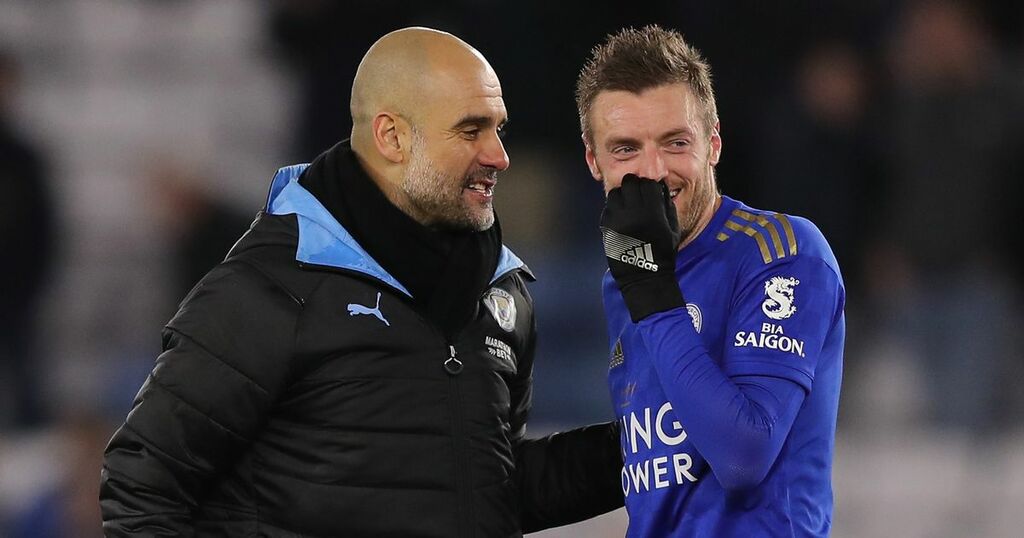 When Pep Guardiola sought to heap praise on his young star Ferran Torres after his two-goal display against Arsenal, he came up with an unusual comparison.

Others have spotted vague similarities between the 21-year-old Spaniard and Sergio Aguero, and you might think the Manchester City manager could conjure up a great name from the past, like his namesake Fernando Torres, or Ronaldo, or David Villa.

Instead, Guardiola chose to hold Torres up against Jamie Vardy, the Leicester City striker who will line up against the Blues when the Premier League resumes this weekend.

Torres had shown good predatory instinct to snap up his first goal against the Gunners, and then perfect timing to dart onto Riyad Mahrez ’s excellent cross for his second.

Guardiola said afterwards: "In this position, he makes movements like the best strikers in behind, like Jamie Vardy."

Normally, that might be seen as damning with faint praise - after all, Vardy has just 128 goals at the top club level and just seven for England. Tores is 13 years younger and already has nine goals for Spain.

But Guardiola’s admiration for Vardy is genuine, and no wonder - even Cristiano Ronaldo cannot match his record against teams managed by the Catalan.

The 34-year-old Yorkshireman has been an absolute torment to Guardiola and his City team ever since the manager took over in 2016.

And Vardy will undoubtedly fancy adding to his impressive record against the Blues when the two teams meet at the King Power.

The Fox in the box has netted eight times in five years against City, including a hat-trick last season as City were shocked 5-2 at the Etihad by the league’s greatest over-achievers.

That took his tally of goals against Guardiola’s City team to nine - he has 11 against the Blues in total - and no other player comes close to that record in the last five years.

But Vardy tends to score freely against all of the top teams. He has also bagged eight against Liverpool, five against Manchester United, six against Spurs and 11 against Arsenal since moving up to the top flight with Leicester in 2014.

Guardiola has put his finger on the reason Vardy is so prolific against City: “We play 40 metres in front, so it’s perfect for him. “Vardy scores goals against us and all the teams.

“In the box, in the final third, he is exceptional. He is one of the best strikers I’ve ever seen. With his movement, intensity, high pressing; he’s an exceptional player.”

It is a problem Guardiola and City will face again, when Vardy lines up against them on Saturday.

They know no other way than to seek to control possession, peg teams back in the final third and hammer and slice away until resistance crumbles.

That means the Blues play a high defensive line, and have always been vulnerable to quick attackers like Vardy who are sharp enough to exploit the space behind them.

Vardy has done so repeatedly in the last five years, exploiting the lack of pace of defenders like Eric Garcia, last year, Nicolas Otamendi, repeatedly, plus Fernandinho.

What is the key to stopping Vardy, and Leicester, on Saturday? Have your say in our comments section here

And in Guardiola’s difficult first season, he fully exploited a City defence that was trying to get to grips with the manager’s build-from-the-back philosophy, destroying a nervy John Stones and fish-out-of-water Aleks Kolarov as a centre-back pairing.

That has been a common theme when Vardy has scored against the Blues - the lack of a recognised central defensive partnership.

His two hat-tricks against City came against pairings of Nathan Ake and Garcia, and Stones and Kolarov.

He has drawn blanks the three times he came up against Vincent Kompany, and the two occasions he has faced Ruben Dias.

That is the key to defending against Vardy, having centre backs who cannot match him for pace but who know how to defend a high line.

Kompany was expert at it, and Dias brought back that facet of City’s play last season, signing days after that Vardy-inspired 5-2 trauma.

The Blues’ ordinary record against Leicester in modern times continued in the Community Shield, when they fell to Kelechi Iheanacho’s late penalty, and they cannot afford another slip-up on Saturday, already playing catch-up after losing to Tottenham on the opening day.

Keeping Vardy quiet will be key to that.