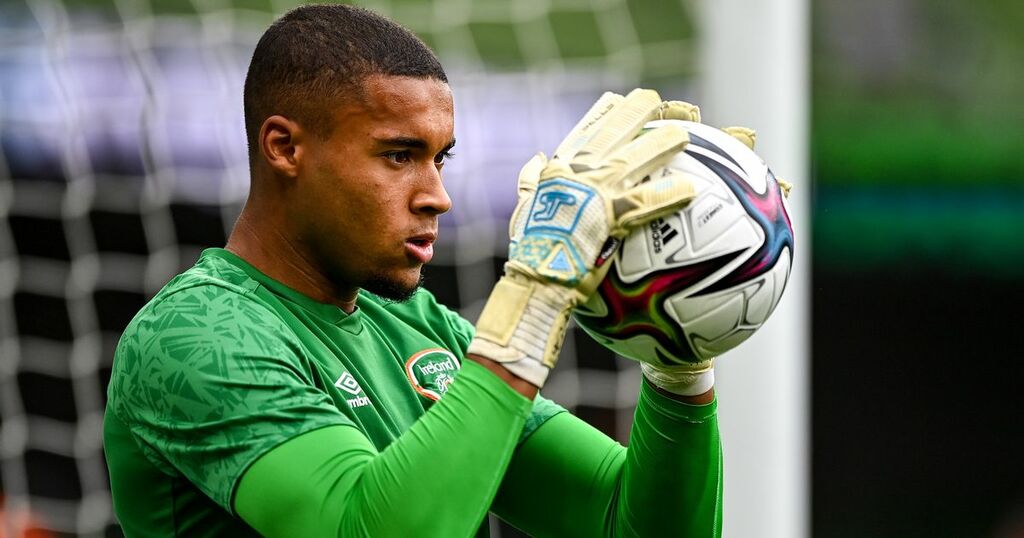 Manchester City have a goalkeeper on their books who is on course to be “one of the top five” in his position in the world.

And, whilst Gavin Bazunu is currently on loan at Portsmouth as the Blues give him valuable match experience, the 19-year-old has already captured attention across the planet by saving a penalty from Cristiano Ronaldo.

The Dubliner, who is of mixed Irish and Nigerian heritage, has quickly established himself as Ireland’s first choice ahead of Liverpool reserve Caoimhin Kelleher and West Ham number two Darren Randolph.

Bazunu was picked by Ireland manager Stephen Kenny for the two World Cup qualifiers against Portugal and Azerbaijan last week - and promptly pulled off a brilliant save from Ronaldo’s spot-kick to initially deny the Manchester United man a world international goaslcoring record.

He was beaten by two late headers from the Reds star to deny the Irish a famous victory, but Bazunu emerged with his growing reputation enhanced, and is set to keep his place against Serbia tonight, as the Irish seek to salvage something from a disastrous qualifying campaign.

His reaction to the penalty incident will have gladdened Pep Guardiola’s heart.

Rather than dwell on the excellent save, the teenager - currently on loan at Portsmouth - was more annoyed about his role in conceding the spot kick in the first place.

"My first emotion was just disappointment at giving it away," he said, after his poor pass to Jeff Hendrick had panicked the player to committing a foul.

Asked whether the fact he was facing Ronaldo, on the brink of football history, Bazunu was equally mature: “I wasn't thinking about that too much, I was just focusing on — from the clips I had watched — what he was going to do and just stick to the side I was going to."

But Bazunu is precocious - he made his debut for Shamrock Rovers in the League of Ireland premier division at the age of 16, and his display in front of scouts from several top clubs in a Europa League tie against Swedish outfit AIK led to City paying out an initial £420,000 to snap him up.

That fee is subject to add-ons, and Bazunu’s six caps for Ireland have already lumped a sizeable amount on top.

He was sent out on loan to Rochdale last season, under the watchful eye of manager Brian Barry-Murphy, who has since become elite development squad manager at City.

Bazunu played 32 times for the League One side as they were relegated, but showed plenty of evidence of his potential.

Dale were leaking goals as they fought the drop, and some fans felt a more experienced keeper might be needed - but Barry-Murphy was adamant that Bazunu was the man for the job.

He told club bosses that the young Irishman would be “one of the top five keepers in the world” in a few years - and he is not a man given over to hyperbole.

Since joining the Ireland camp, Bazunu has impressed senior colleagues, including Sheffield United defender John Egan, who said: "We've got really strong competition there and Gav, for someone so young, to play in that position, especially which is the most scrutinised position on a football pitch, is fantastic to see his composure and his ability.

"He wouldn't be contracted to Man City if he didn't have ability. He's a top young keeper, a top, young talent and hopefully he can keep growing and keep improving. The sky's the limit for Gav really."

The loan at Pompey was carefully selected by City, as Pompey boss Danny Cowley likes to play out from the back in Guardiola style.

Bazunu had to sit on the bench for the two opening games, as he recovered from a quad injury, but he replaced Alex Bass following a Carabao Cup defeat at Millwall, and has conceded just once in four games since as Pompey have established a foothold for a promotion challenge.

Cowley’s words of praise for Bazunu will resonate at City, even if Guardiola’s first choice Ederson has just penned a new six-year deal.

That aspect is as important to City as his shot-stopping ability, and Bazunu said he was happy to go to Pompey as they would allow him to keep developing as a ball-playing keeper.

"Obviously being at Manchester City and the way they play, I wanted to come to a team which wants to perform in a similar fashion. That’s only going to improve me as a goalkeeper and help my development,” he said.

"My overall goal is to be number one at Manchester City one day. To give myself the best chance of achieving that goal is to come to a team which plays similarly."