Man City fans remember Super League horror: 'Everything we loved was being taken away' 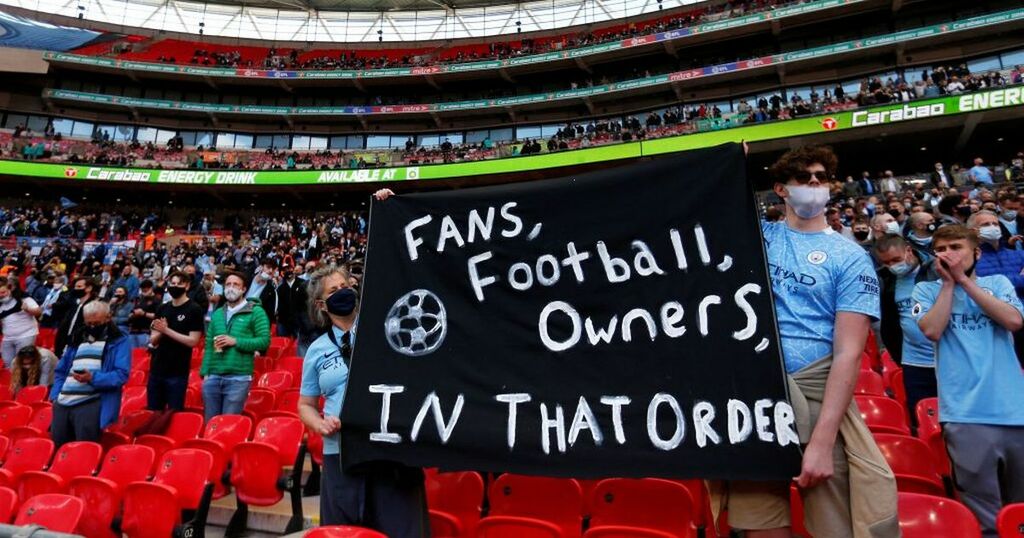 Did that all really happen?

Seven months ago today, 12 of Europe’s elite clubs - including Manchester City as one of six from the Premier League - signed up for the ill-fated breakaway Super League project.

As hazy spring sunshine bathed a loosening UK lockdown, City and Chelsea did their best impressions of the internet’s favourite Grandpa Simpsons meme by entering and leaving in quick time and Real Madrid supremo Florentino Perez ranted about his new and crumbling empire on El Chiringuito - barely any of it seemed real.

But European football did lurch perilously close to the precipice. Not that you’d have known it when City and Chelsea met in the final of the Champions League in Porto the following month - players from each team straining every sinew in pursuit of a prize their clubs had tried to torpedo six weeks earlier.

Fans and players everywhere were unified in the common purpose of bringing down a closed shop that Pep Guardiola emphatically dubbed “not sport”. That unity was also quickly forgotten as we resumed the daily grind of backbiting and banter.

So, what do we make of it all now? At City, a rare yet cataclysmic misjudgement in terms of sporting strategy meant the likes of chairman Khaldoon Al Mubarak, chief executive Ferran Soriano and chief football operations officer Omar Berrada emerged more or less unscathed. Is that okay?

To discuss that and more, City is Ours editor Dom Farrell hosted a Facebook Live discussion with Blues fans Anya Hudson, Dan Burke and Joe Butterfield to hear their thoughts on the Super League debacle.

“Like a lot of people, I was appalled by the whole project and especially City’s involvement in it,” Dan said. “I remember the brief period when the news broke on that Sunday and it looked like City weren’t involved in it at first. I was so relieved at that and that relief lasted about five minutes when it transpired they were involved.

“It was about 48 hours of real turmoil, of feeling like everything we loved and held dear about football was being taken away from us. I know that sounds a bit ridiculous in hindsight because I do think we suffer a bit from Stockholm syndrome as football fans. We like the status quo.

“As City fans, we benefit from the status quo a lot nowadays. We like the Champions League as it is, for all its and UEFA’s faults. I didn’t want City to leave the Premier League despite the fact it’s a bit of a broken league with the financial disparity that warps the playing field - again, that we benefit from.

“It was a weird feeling thinking it was going to be taken from us, but at the same time, I do think there are drastic reforms that need to be taken.”

Despite the furore dying down quickly, Joe decided to stand firm on a piece of direct action he pledged to take - giving up his Manchester City season ticket.

To get his live football fix, he has been going to watch Oldham Athletic, meaning a front-row seat for a very different type of administrative crisis lower down the footballing pyramid. Abdallah Lemsagam’s doomed tenure has Latics’ league status hanging by a thread.

' Everyone's made peace with it'

“Oldham’s owner is pretty bad, which I knew about before going to watch their games. He is incompetent, I wouldn’t say corrupt or anything like that, he just doesn’t know how to run a football club and they’re currently in the bottom two of League Two,” Joe explained.

“Oldham had that but it wasn’t functioning, so it’s been taken over by people who have actual direction on how to get the owner to do the correct things. But the owner has refused to engage with them.

“So now, with themselves and a protest group, they’ve worked together generating national media attention, with the likes of Sky Sports and talkSPORT to put the pressure on the owner.

“But the thing is, when it comes to Manchester City, it’s difficult to marry the two. The other five teams in the top six have supporters’ trusts but they all still joined the Super League regardless.

“I can understand winning the Premier League and reaching the Champions League final is going to make fans think it wasn’t that big of a deal. As we were the last in and first out, which the club have been keen to put forward to us, we’re seen as the least bad of the six. I think everyone’s made peace with it.”

A Twitter account for a Manchester City Independent Supporters’ Trust launched in September this year but has not posted for two months, with an acknowledgement that it “will take a while to get off the ground”.

This was at a time when frustrations with the club on a more everyday level were clear to see.

“They could increase communication generally,” Anya said. “I put the Super League together with so many different things - there was the virtual season ticket thing, the ticket exchange problems, certain transfer rumours and, in my mind, that was one of the worst points of this ownership.

“After lockdown and the pandemic, maybe we had a feeling that the communication with the club wasn’t there anymore. I don’t know whether that was just a result of the pandemic - it was easier for the club not to consider those things.

“They hadn’t had fans in stadiums, there wasn’t that every week thing that started again with the season tickets.

“I think if they communicated with fans things like that would’ve been avoided very easily.”

Holding a 127-year-old club we love to account on such everyday matters feels like important vigilance to Dan, a Berlin-based editor for One Football, who fears the spectre of the Super League has not gone away, however surreal those April days might have felt.

“There’s been a bit of apathy since the Super League all fell apart. I understand that because we’re football fans and it’s supposed to be entertaining, a bit of an escape from the rigours of daily life,” he added.

“We shouldn’t have to be organising a political movement to hold our football clubs to account. But at the same time, if we accept their paltry apology, I can see something like the Super League happening again.

“As fans we need to realise, to be very aware these big clubs and businesses are not our friends and we need to hold them to account in whatever way we can.

"I feel like we’ve let go of that energy a bit as a collective and we could be in for a rude awakening in the future.”

Do you think a breakaway European Super League remains a threat? Follow Dom, Anya, Dan and Joe on Twitter to join in the conversation and let us know what you think in the comments section.