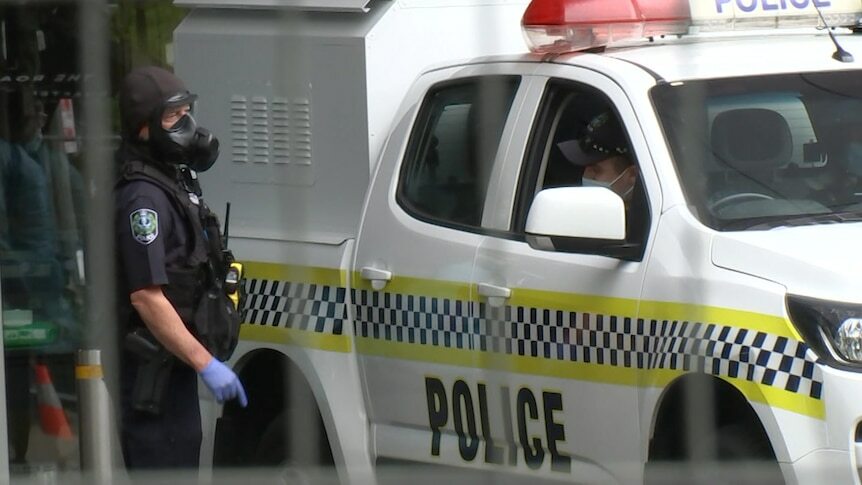 Three people arrested at an Adelaide medi-hotel this afternoon were among four stopped after allegedly trying to get into South Australia from NSW and Victoria, police have said.

Their car was stopped on a dirt road near Loxton, in the Riverland, about 5:30pm on Wednesday.

South Australia's borders are closed to NSW and Victoria because of COVID-19 outbreaks in those states.

Police say one man in the vehicle — a 34-year-old from NSW — admitted having been in a "restricted area" and was arrested.

He appeared in court today.

Police said the other three occupants of the vehicle gave conflicting accounts of where they had been in the previous 24 hours and were taken to the Pullman Adelaide hotel while their movements were investigated.

The trio was arrested at the hotel about 3:30pm today and charged with breaching the Emergency Management Act.

A 50-year-old Victorian woman, a 31-year-old NSW woman and a 32-year-old NSW man were refused police bail and were expected to appear in the Adelaide Magistrates Court on Friday.

Police arrested a man staying at the same hotel on Tuesday and charged him with breaching COVID-19 directions.

The Adelaide Magistrates Court heard on Wednesday that the accused had mental health issues and his alleged conduct did not threaten the community.

Two Victorian men who the same court heard were rude and abusive to staff at the hotel when they breached quarantine directions in August were sentenced to more than a month in prison.