Man, 29, taken to hospital after car crashes into tree 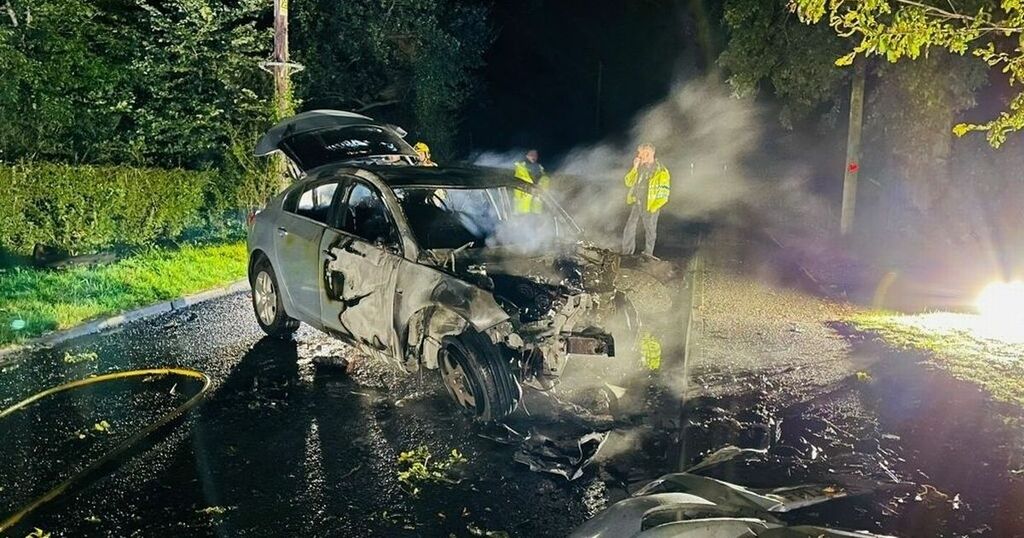 Dramatic pictures show the aftermath of a car fire after it crashed into a tree.

The incident happened just after 1.15am this morning in Adlington in Cheshire.

The fire service said a passing motorist pulled the driver, a 29-year-old man from Widnes, to safety.

He was then taken to hospital from the scene with serious injuries.

Dramatic pictures show the aftermath of the crash, with smoke billowing from the badly damaged car.

Detectives are urging anyone who witnessed the crash, or who has any video footage of it, to get it touch.

A statement from Cheshire Police said: "Officers are appealing for witnesses and video footage following a serious collision in Adlington.

"At around 1.15am police were called to reports of a collision on Brookledge Lane.

"Officers attended the scene and found that a silver saloon car had collided with a tree.

"The driver of the car, a 29-year-old man from the Widnes area, is believed to have sustained serious injuries and is currently being treated in hospital.

"Enquiries in relation to the incident are ongoing and officers are keen to hear from anyone who witnessed the collision, or anyone with any dashcam footage which may aid the investigation."

"A car had collided with a tree and caught fire.

"A quick thinking motorist pulled the driver to safety.

"With @PoyntonFS we tackled the fire and made the scene safe.

"The driver was cared for by our brilliant colleagues from @NWAmbulance. #think #fatal5."

A spokesperson for the North West Ambulance Service said: "An ambulance and response vehicle attended the incident.

"One man was taken to hospital."

Anyone with any information is asked to call Cheshire police on 101, or visit www.cheshire.police.uk/tua, quoiting IML-1079746.

Alternatively, anyone with information can report it to Crimestoppers anonymously via 0800 555 111 or online.