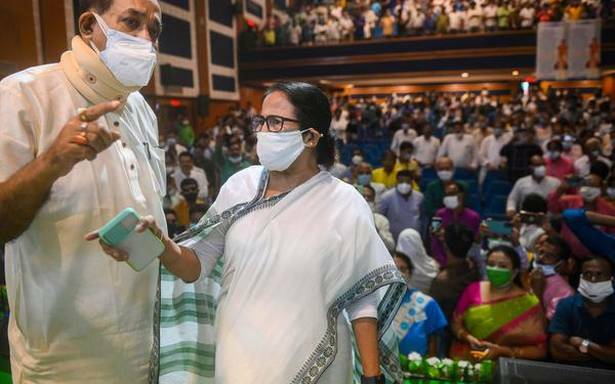 West Bengal Chief Minister and Trinamool Congress (TMC) chairperson Mamata Banerjee on Wednesday began her campaign for the Bhabanipur bypoll by addressing a meeting of party supporters in the constituency. She targeted the BJP for allegedly indulging in political vendetta.

“Just after the bypoll dates are announced, Trinamool Congress [TMC] leaders are being summoned by Central agencies. Notices are being sent to Abhishek [TMC general secretary Abhishek Banerjee] and Partha [TMC leader Partha Chatterjee),” she said. She dared the agencies to probe the allegations against Mr. Banerjee.

Her remarks come after the Enforcement Directorate served a second notice to Mr. Banerjee in a coal pilferage case.

The Chief Minister has to face the bypoll as she lost the poll at Nandigram by a narrow margin of 1956 votes to BJP leader Suvendu Adhikari. “I have to contest again a poll due to a BJP conspiracy. We have gone to court over the issue. If there is no merit in the petition, the court would not have accepted it,” she stated.

Referring to the recent polls in which the TMC registered a convincing victory over the BJP by winning 213 seats in the 294-member Assembly, she asserted that the Centre, all its agencies and ‘money power’ and ‘muscle power’ of the BJP could not defeat her. There was a planned attack on her in Nandigram in which she suffered a foot injury and had to confine to a wheelchair during the poll campaign, she observed. CPI(M) fields candidate against Mamata

To file nomination on Sept. 10

The Chief Minister noted that she was happy to contest from Bhawanipur, her home constituency from where she got elected in 2011 and 2016. “Not only the Assembly polls, but for the six times I contested the Lok Sabha poll from South Kolkata, people of Bhabanipur supported me,” she said.

She announced that she would file her nomination papers on September 10.

The constituency will go to the polls on September 30.

Ms. Banerjee assured Minister Sovandeb Chattopadhyay, who resigned from Bhabanipur to pave the way for the bypoll, that he would also contest a bypoll and remain a Minister.

‘Real contest is between BJP, TMC’

State BJP president Dilip Ghosh said the real contest at Bhabanipur would be between the TMC and the BJP.

“There can be any number of candidates in bypolls, our voters are with us. The CPI(M)-Congress announcing or not announcing their candidates is not a factor in West Bengal polls; they didn’t get entry into the Assembly in the last polls. We’re ready,” he added.

The BJP is yet to announce its candidate for the Bhabanipur bypoll.