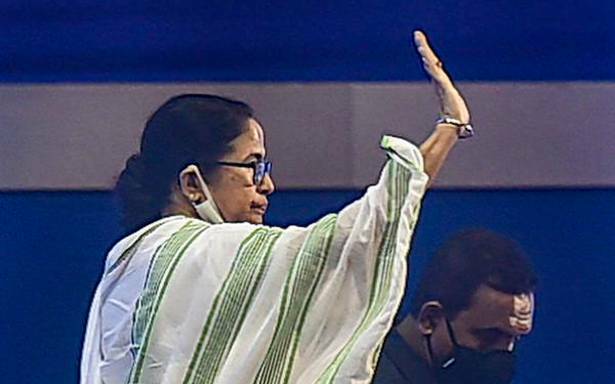 West Bengal Chief Minister Mamata Banerjee on Tuesday urged the organisers of community Durga Puja celebrations to observe the festival while maintaining necessary COVID-19 protocols. “Make it small but beautiful. Arrange for sanitisation and distribute masks among the people,” she said after chairing a meeting with community Durga Puja committees in the city.

The Chief Minister, who is contesting bypolls at the Bhabanipur Assembly seat in the city, scheduled on September 30, said that the important announcement on organising Durga Pujas could not be postponed. “I have taken permission to hold this meeting,” she said.

Ms. Banerjee said that the government would not make any new changes on observing the Pujas, and the situation would remain like 2020.

The Chief Minister urged Durga Puja clubs to spread awareness about the social welfare schemes of the State government.

“People enjoy the festival during the night. There was a relaxation in night curfew last year. We will decide on this after the election [bypolls]. There is still a lot of time. We also have to be mindful of the third wave,” Ms. Banerjee said. She said that a decision on the Puja carnival on October 18, will also be taken in due course of time.

The State’s Chief Secretary H.K. Dwivedi announced free licenses for Puja organisers as well as a 50% discount on the power tariff for the committees organising the Durga Puja this year.

In 2020, the Calcutta High Court had imposed restrictions on observing Durga Pujas by declaring that every Puja pandal would remain a no entry zone and only a fixed number of organisers can be present in the Puja pandal.