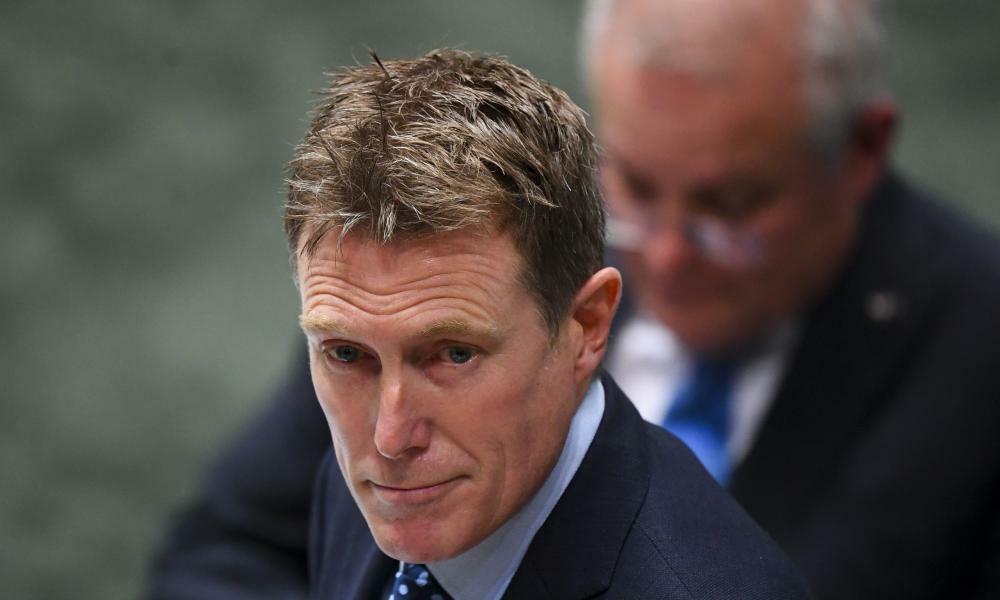 Malcolm Turnbull says Christian Porter’s decision to accept money without knowing the source was an “extraordinary abrogation of responsibility”, after the former attorney general declared part of his legal fees were paid by unknown donors.

Porter, the industry and science minister, updated his register of interests on Monday, to include the Legal Services Trust, which made an unknown contribution to his legal fees for a discontinued defamation case against the ABC and journalist Louise Milligan.

Porter declared he had “no access to information about the conduct and funding of the trust”.

Speaking to ABC radio on Wednesday, Turnbull expressed concern about the accountability implications saying he was “staggered that Porter thought he could get away with” accepting donations without knowing the source.

“It is a shocking affront to transparency.”

Turnbull, who was prime minister from 2015 to 2018 during which time he promoted Porter to his previous attorney general portfolio, said it was “wrong” and he was “astonished” MPs could accept donations from unknown sources in a personal capacity, a practice which was banned for political parties.

“What Porter is saying is that it is OK for an Australian cabinet minister, a former attorney general, to take a large donation, a large gift to himself, without disclosing who the donor was and apparently without him knowing who the donor was,” Turnbull said.

The treasurer, Josh Frydenberg, defended Porter’s actions, saying he had disclosed the donation in a line with the rules and blamed the opposition for the criticism, which he labelled “vicious personal smears”.

“The point about Christian Porter’s legal defence is he did not use taxpayers’ money and that is very important,” Frydenberg said in an interview with Sky News.

“Labor will continue with their vicious personal smears and campaigns. I don’t think Australians have got time for it.”

Transparency International Australia was also highly critical of Porter’s acceptance of money from an unknown source.

Chief executive Serena Lillywhite told the Guardian it was “staggering” that Porter would take the money.

“The most basic due diligence would require knowing and disclosing who ultimately stumped up the money, who manages the Legal Services Trust, and when the Trust was established,” she said. “The hypocrisy is stark given the growing pressure on non-government organisations and charities to disclose, which they do, who their donors are.”

Lillywhite said the public and parliament had a “right to know” who was behind the money.

“If transparency and ‘abundant caution’ were the key drivers for the former attorney general, he should never have accepted money from an unknown source and for an undisclosed amount,” she said.

Porter launched defamation action against the public broadcaster in May over an online article that alleged an unidentified cabinet minister had been accused of rape in January 1988 in a dossier sent to Scott Morrison and three other parliamentarians.

Porter subsequently identified himself as the minister and strenuously denied the allegations.

In late May, Porter agreed to discontinue the defamation action, following mediation with the ABC. The broadcaster agreed to add an editor’s note to the original article which said it did not intend to suggest Porter had committed the alleged offence and that “both parties accept that some readers misinterpreted the article as an accusation of guilt against Mr Porter. That reading, which was not intended by the ABC, is regretted.”

The ABC agreed to pay Porter’s mediation costs, but no damages.

Porter would not say who was funding his case, despite repeated questions. His declaration was the first insight into where the funds had come from.

Overnight, Turnbull tweeted his concerns with Porter’s explanation, calling it “wrong” and that “it’s like saying “My legal fees were paid by a guy in a mask who dropped off a chaff bag full of cash.”

Labor’s Mark Dreyfus said the Australian people “deserved to know” who was donating funds to its politicians.

“The Australian people need to know who set this trust up, who funded it, how much they donated, and whether they expected to get anything in return for these donations,” he said.

“If Mr Porter genuinely doesn’t know who his donors are he shouldn’t accept their money. Did the money come from criminals? A foreign power? Apparently Mr Porter doesn’t care.”

Porter’s office has not responded to questions over whether the minister can rule out the money came from prohibited donors.

A spokesman said he had undertaken disclosure in accordance with the requirements of the register, but declined to say how much of Porter’s fees were covered.

“No taxpayers’ funds were used in meeting the costs of the minister’s actions against the ABC and Milligan, which have now concluded,” he said.

The prime minister’s office has not responded to questions on whether Porter’s declaration satisfies ministerial standards.