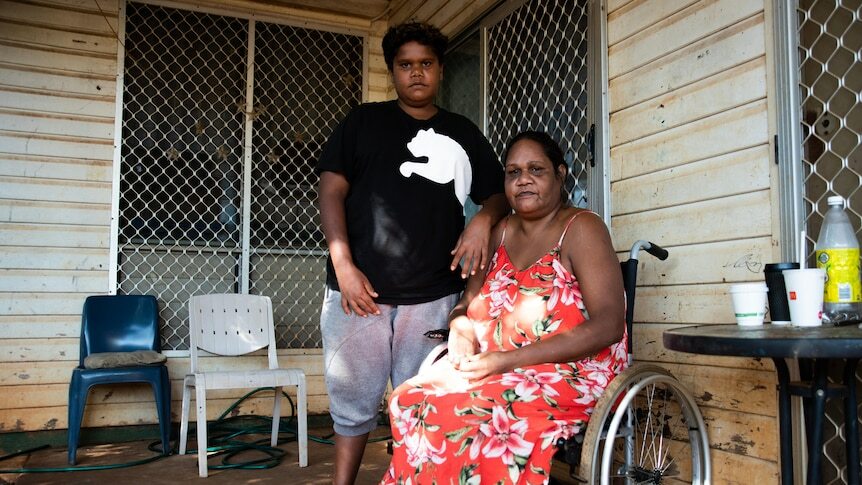 Public housing eviction leaves mother and son homeless in 'heartless' trend in the NT
When Cherylene Campbell and her sons finally got a home with disability access, they thought it was a dream come…

After leaving a toxic relationship, Amy Bourke was desperate to find a home that would give her son Chance some…

ABC News
One subscription that gives you access to news from hundreds of sites
Memes and videos mocking Amber Heard expose hatred and distrust of women, experts say

"Malcolm is half-killing me," R Rubuntja told her daughter on the phone.

WARNING: Aboriginal and Torres Strait Islander readers are advised that this article contains an image of a person who has died.

"I feel scared," a witness heard her say.

"I can't tell you where I am because Malcolm is going to hit me in the car," Ms Rubuntja told her daughter in another phone call.

An hour later, her partner, Malcolm Abbott, drove two laps of the Alice Springs Hospital car park before steering toward her.

He accelerated into Ms Rubuntja, trapping her in the car's undercarriage, before driving over her again and dragging her body across the bitumen of the Alice Springs Hospital car park.

Ms Rubuntja, 46, died metres from the front door of the emergency department.

Abbott, now 50, was sentenced to 25 years in prison over her death in January last year but, as Ms Rubuntja's friends and family found out in court during his sentencing, this was not his first offence.

A history of violence

This included his sentencing in 1997 to 10 years in prison for killing his then-wife and stabbing another person.

He was later sentenced in 2009 to another five years in prison for stabbing his then-partner.

In 2014, he hit another former partner with a wheel brace and was sentenced to 15 months in jail.

In 2018, he stabbed and punched his partner at the time in two separate incidents, which together sent him to jail for another year.

Dr Brown and other advocates working in First Nations family and domestic violence said Ms Rubuntja's story showed that the system was not working.

"I would like to know how a man who had previously killed another woman was able to continue his violent offending until he was released and he murdered my friend."

Ms Rubuntja has been remembered as a leader, a mother and grandmother, but her friends and family said they had no idea about Abbott's history, and she had not engaged with any support services.

Dr Brown said a lot of research had been undertaken into what level of risk a woman experiencing domestic violence was facing at any given time.

She said Abbott's prior offending would have put Ms Rubuntja on somebody's radar if a risk assessment had been done, but that did not appear to have happened at any point in their relationship.

"There were multiple opportunities where we could have intervened," Dr Brown said.

Dr Brown said information-sharing between local organisations and Northern Territory police that "privileges women and children's safety above any man's right to confidentiality" would have made it clear Ms Rubuntja could be in danger.

This does not currently exist in the NT but versions of it do exist in other jurisdictions.

Being the only women's shelter in Central Australia, Ms Ellis said hundreds of women engaged her service every year.

She said that while assessing risk was "hard", it was also doable if you had enough information about a woman.

Even if that information was collected and shared, however, she said women could still fall through the cracks because frontline services like hers were seriously overburdened.

Dr Brown said the community in general, including police and the justice system, did not understand how domestic violence worked.

"We need to stop looking at domestic violence incidents as one-off incidents of violence," she said.

"It occurs within a long-term, ongoing pattern of power and control of violence and abuse."

Dr Brown believed this misunderstanding, and an absence of well-supported training for police and the wider public, contributed to Ms Rubuntja's death.

"How many other women is it failing every day?"

Hannah McGlade is a Nyungar human rights lawyer who recently travelled to New York to address the United Nations (UN) on the plight of First Nations women in Australia.

Since 2016, Dr McGlade has campaigned at the UN and at home for a standalone national action plan to end domestic violence for Indigenous Australians.

Indigenous leaders have also called for a separate plan to address the specific complexities of domestic violence in First Nations communities.

Last year, federal Minister for Women's Safety Anne Ruston announced the government would develop two separate five-year plans, but Dr McGlade said advocates were yet to be given "more details about the process".

The former Labor government in 2011 released the first national action plan designed to coordinate state and federal policies, with the goal of making a "significant and sustained reduction" in family, domestic and sexual violence.

It will lapse in June 2022 and the government is currently drafting a new 10-year plan.

Labor has made creating a separate First Nations plan a federal election promise.

Dr McGlade said it was heartening to see commitments, but she believed it was vital that it translated into action.

"They need to commit to investing and resourcing the plan properly," she said.

Public housing eviction leaves mother and son homeless in 'heartless' trend in the NT
When Cherylene Campbell and her sons finally got a home with disability access, they thought it was a dream come…

After leaving a toxic relationship, Amy Bourke was desperate to find a home that would give her son Chance some…

ABC News
One subscription that gives you access to news from hundreds of sites
Memes and videos mocking Amber Heard expose hatred and distrust of women, experts say