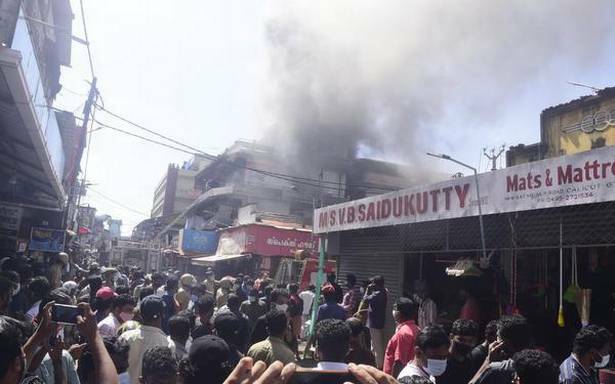 A major fire outbreak created scary moments along the M.P. Road near Kozhikode’s S.M. Street on Friday. The quick intervention of a team of six fire and rescue service units managed to bring the situation under control in nearly an hour.

The fire outbreak occurred at 2.30 p.m. when several labourers were working and moving around the busy area. According to officials, the fire broke out from the godown of a footwear shop. Many nearby shops dealing with the sales of plastic products had a narrow escape from the incident.

Four workers, including two women, were trapped inside the building. They were rescued with the support of some local traders and head-load workers before the arrival of the rescue forces. No one sustained injury in the incident.

Though smoke enveloped the whole area posing a huge hurdle to the firefighters, they managed to save many nearby shops. A building that was used to store Liquefied Petroleum Gas cylinders was also in the list of saved facilities. Officials said they were yet to get any information about the total loss.

District Police Chief (Kozhikode city) A.V. George said the police officials who were present at the spot responded quickly to the emergency situation and cleared the area for the Fire and Rescue team to work fast. He also said the incident could have been tragic if it was not reported on time by those present at the spot.

Rescue officials said the fire was caused by suspected electrical short circuit. The gutted building would be inspected on Saturday to check whether there was any safety violation on the part of the building owner or trader, they said.

It was in 2017 that a major fire outbreak shook the street, destroying a three-storeyed textile shop. Considering the recurring incidents, the district administration had then adopted a number of safety measures including complete renovation of the street by spending huge funds. Revenue Department officials said such measures taken in the past helped the rescue teams to handle the latest incident effectively.