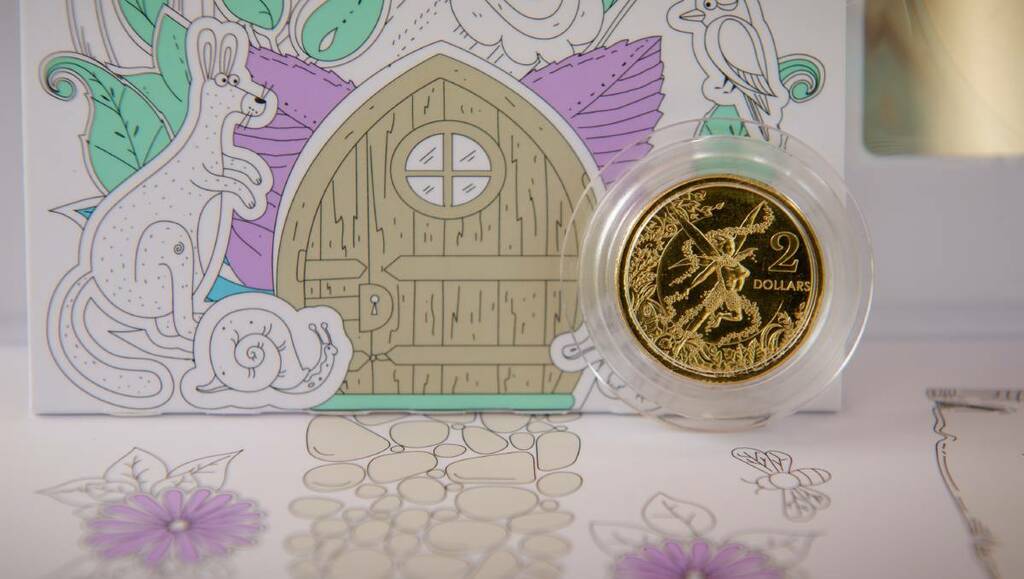 As far as celebrity clients go, the Tooth Fairy is pretty up there.

This is the third year the mint has come on board with the beloved tooth collector, creating an Australian fairy-themed $2 collectors coin for Aussie kids losing their baby teeth in the coming 12 months.

The uncirculated coin comes in a kit, for $25, that includes a bamboo toothbrush, a floating glitter fairy pen, a tooth chart and a special message from the Tooth Fairy.

As well as featuring the Tooth Fairy - who is pictured on the coin carrying a relatively large tooth from the front door of her pixie house - it also is surrounded by native flora.

"It is a beautiful coin featuring an Australian fairy with the Acacia leaves as the wings and a bit of wattle in her hair. And around the edge of the coin, you can see Australian ferns and flowers. I think it's quite a pretty coin," Royal Australian Mint chief executive Leigh Gordon says.

"The coin's designer is the very gifted Canberran, Bronwyn Scott, who came up with a coin the public would like.

"We certainly want to tell the stories of Australia through our coins, so having that Australian slant on it was important to the mint as well. We want to see a coin that appeals to people."

While some other collectable coins would see the Royal Australian Mint consult with stakeholders on the design, Gordon says there weren't many fairies consulted on this particular design as the Tooth Fairy trusted them completely with the design.

Since being released last week, the coin has gained a lot of interest, with the Royal Australian Mint's Facebook post gaining thousands of hits and the online store has seen many inquiries.

"We've tried to understand why there has been far more interest in this coin compared to previous years. It might be just getting better known or people might now have more of an expectation for the coin," Gordon says.

The coin is part of the mint's efforts to get children interested in coins.

As well as hosting school groups throughout the year, the mint also has a Mini Minties program that entertains young children with a set of structured activities.

Next month's Minit Minties program even sees a special Tooth Fairy event, where on February 4, children can make a special mailbox to put their teeth in for collection.

But the celebrities that the Royal Australian Mint has worked with is not just limited to the Tooth Fairy. This year has already seen the mint work with another children's favourite.

"We had the first coin of the year, on the first of January. We're the first mint in the world because of our unique position on the globe to mint the first coin for each year," Gordon says,

"This year the theme of the coins was dinosaurs down under. And we had Dorothy the Dinosaur as the celebrity that came and minted the first coin of the year."

For more information about the Tooth Fairy coin or for bookings for the Mini Minties program, which is suitable for four to six year olds, go to ramint.gov.au.