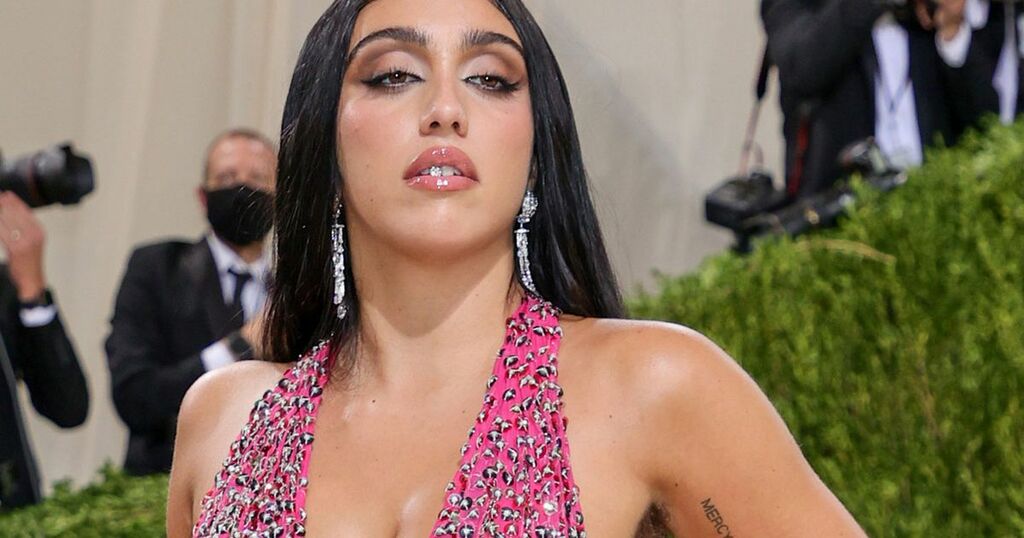 Madonna's model daughter Lourdes Leon made a big impression at this year's Met Gala as she proudly showed off her armpit hair.

The raven-haired beauty posed up a storm on the famous red carpet in a daring pink gown that featured a full bejewelled skirt and bikini top with strips of material that wrapped around her body.

Standing on the iconic staircase at the event at New York's Metropolitan Museum of Art, she lifted one arm above her head to prove just how beautiful the natural look can be.

Lourdes, 24, ensured that all eyes were on her as she put on a stunning display for waiting photographers.

Her jet black hair hung loose and fell down to her knees and she accessorised with a handbag that matched her dress and some statement jewellery, including an eye-catching belly button ring.

Lourdes struck a series of confident poses for the camera, even cheekily sticking her tongue out while running her fingers - complete with long bejewelled nails - through her locks.

Lourdes was among a host of famous faces to head to the Met Gala as it returned following a year of cancellation due to the coronavirus pandemic.

It went ahead last night, much later than its usual spot on the first Sunday in May.

The theme for the event was In America: A Lexicon of Fashion, which saw celebs adopt a number of wild looks.

Kim Kardashian caused a stir when she showed up in a bizarre all-black outfit that covered her quite literally from head to toe.

Even Kim's face was obscured as she posed for photographers alongside a man in a matching outfit who fans originally believed was her estranged husband Kanye West.

However, the man was actually Balenciaga creative director Demna Gvasalia, who designed the outfits.

Do you love showbiz news? Sign up to our newsletters to get all the latest headlines sent straight to your inbox.

And while Kanye skipped the famous red carpet, it's said that the wild look was all his idea.

TMZ reports that the rapper, currently in the midst of a divorce from Kim, was the driving force behind the look and that it's he who "gave Kim the courage to push the envelope with creativity and people's imagination through art."