Madison Cawthorn wants me to buy a freakin' tank 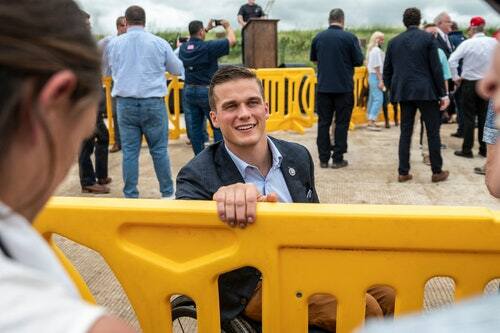 North Carolina congressman Madison Cawthorn loves weapons. LOVES ‘em. He loves guns so much he tries to bring them on airplanes. He loves knives so much he brings them to school board meetings. He loves trees so much he ... oh, wait, no, he HATES trees.

My point is that Cawthorn, a habitual fabulist and deeply unhinged bigot, seems to love nothing more in life than owning and venerating implements of death — the bigger, the better. To him, there is no gun so deadly that it couldn’t be just a little deadlier, which is, evidently, the logic behind his latest attempt at articulating an actual policy beyond his general belief that America is primarily a country for white Christians.

First of all, let’s give a round of applause to the sort of galaxy brain that comes up with a sentence like “let’s make Halo look obsolete with our armaments” and thinks “yeah, this is a good and serious thing that I, a good and serious person, should say aloud” — especially when you consider that Halo is populated by extremely realistic things like “energy swords” and “gravity hammers” and all sorts of other doofy beep-boop “armaments.”

But, okay, fine. Let’s say we suddenly wake up to find ourselves in a world of plasma sniper rifles and whatever the hell this thing is. Here is Cawthorn arguing that weapons used by trained professionals to kill other trained professionals en masse should also be the same weapons used by ... ordinary schmucks to kill other ordinary schmucks en masse? Wait, what?

Like most things Cawthorn, this is hardly an original or particularly creative notion. Gun-humping conservatives have long argued they should be allowed to own any sort of killing machine they’d like, and have stockpiled insane weapons collections better suited for taking down an entire squadron of fighter jets than hunting. What’s notable about Cawthorn’s tweet, then, is less the overarching — and absolutely insane — sentiment he’s struggling to express, and more the absolutely bizarre, hamfisted, extremely cringe way he’s done so. It’s a literal call to arms for the middle segment of a Venn diagram consisting of militarized seditionists one one side, and deeply committed gamers on the other.

This isn’t the first time Cawthorn has extolled the virtue of killing machines. It’s certainly not going to be the last. If nothing else, however, it’s certainly the dumbest. So far.