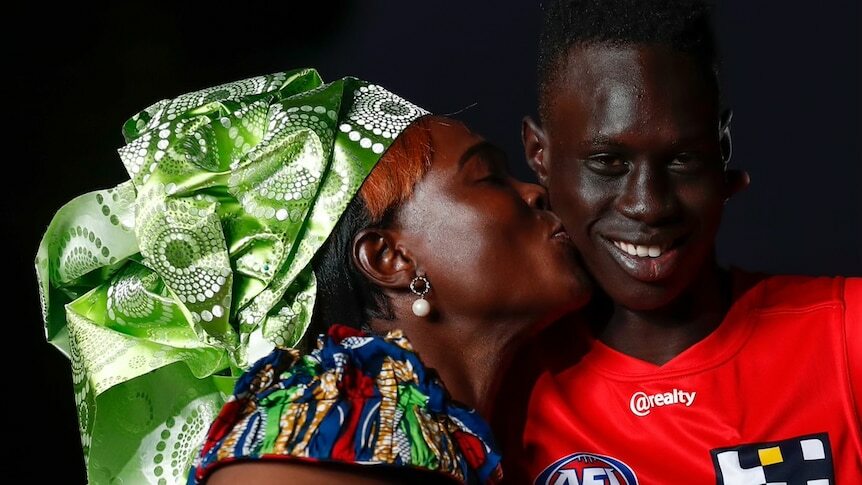 It's been a busy year for 17-year-old Mac Andrew.

He's been working part-time at Bunnings, finishing school, studying to be an electrician while also playing football.

And yesterday he made history, becoming the first AFL player of South Sudanese heritage to be selected in the top five of the national AFL draft.

The Egyptian-born ruckman came to Australia when he was six months old and started playing AFL in primary school.

He was selected by the Gold Coast Suns at pick five, coming from the Dandenong Stingrays and Vic Country talent programs.

In a historic draft for the AFL, the Western Sydney Giants chose another South Sudanese player in the first round.

Leek Aleer left the war-torn country with his mother and sister when he was six.

He'll move to GWS from Central District in the SANFL and looks forward to being a role model.

"[I want to be] someone that kids in my community can look up to," he said.

"Obviously I have to build myself a career first to put myself there but I definitely want to be a role model.

"I'm very grateful and my family is extremely appreciative and grateful as well," he said.

'A new chapter in life'

"My Dad and Mabior Chol's dad actually grew up together and his dad lives up in Brisbane so it'd be good to get a connection with him," Mac Andrew said.

At 201 centimetres, he's taking his history-making selection in his stride.

"I just don't really let the outside pressure get to me and I just try to focus on what I can control," Andrew said.

He's never been to the Gold Coast but like many other COVID weary Victorians is keen to move to the sunshine state.

"A new chapter in life meeting a whole bunch of new people.

"I was pretty keen on going interstate and to land a club like the Suns, I couldn't be more grateful."

"On top of this, Mac shows tremendous physical attributes; for someone two metres tall he's fast, agile, has a great leap and is quite skilful and those players don't come around very often," Mr Burns said.