By B. Madhu Gopal 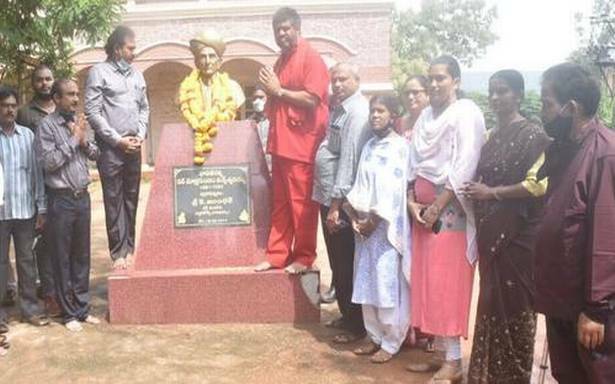 The birth anniversary of Sir Mokshagundam Visvesvaraya was celebrated by various engineering colleges and government organisations in the city on Wednesday.

Tourism Minister Muttamsetti Srinivasa Rao, in his tribute, said Sir Visvesvaraya was an outstanding civil engineer who did the country proud with his unmatched talent. The Minister garlanded a statue of Visvesvaraya and paid tributes to him on the occasion of Engineer’s Day.

He recalled that the major projects, built under the supervision of Sir Visvesvaraya, were still intact. Apart from his engineering marvels, Sir Visvesvaraya had proved to be an able administrator and had rendered services to the nation for 30 years.

A ‘Soil Lab’ was inaugurated at the Head Office of Dredging Corporation of India (DCI) on the occasion of Engineer’s Day. The soil lab, which is a step in the direction of Maritime India Vision-2030 of the Prime Minister, will help in assessing the quality of dredged material at various project sites and also help in turning waste into wealth by recycling of dredged material for reuse, which was hitherto being dumped into the sea.

The lab could be established in a record time due to the encouragement of Minister of Ports, Shipping and Waterways, Secretary-Shipping Sanjeev Ranjan and Additional Secretary-Shipping Sanjay Bandopadhyaya. The lab was inaugurated by Capt. S. Divakar, CGM. G.Y.V.Victor, MD and CEO and Heads of Departments of DCI were present.

Chairman and Managing Director of APEPDCL K. Santhosha Rao, Directors D. Chandram, K. Rajabapaiah, and CGMs garlanded the portrait of Sir Visvesvaraya and paid rich tributes to him at the Corporate Office at Seethammadhara.

The CMD recalled the services rendered by Sir Visvesvaraya to the nation. He said that engineers should strive to acquire knowledge on latest technologies and provide invaluable service to the people.

Vice-Chancellor Prof. Sivaramakrishna said that engineers must be curious and try to go the depth of the problems to resolve them. He also advised the students to take Sir Visvesvaraya as their inspiration and contribute to nation-building.