Lundgaard, Malukas admit to feeling pressure from each other

Then Lundgaard delivered an excellent runner-up finish in IndyCar’s second race at on the Indianapolis road course, while Malukas was in midfield, and the Dane extended his points advantage to 41 in Nashville, where he finished in the Top 10 and Malukas was taken out by Kyle Kirkwood.

However, Malukas recouped most of that deficit with a brilliant second place at the last round at World Wide Technology Raceway in St. Louis.

This week, the pair tested at WeatherTech Raceway Laguna Seca, but this weekend’s penultimate round at Portland International Raceway has a bigger question-mark over it. The 1.964-mile road course in Portland, OR. has seen Malukas race six times on the road to Indy, accruing three wins there, whereas Lundgaard has no experience there. On the other hand, RLL has generally been stronger at the course than DCR, and even scored a fortunate win there in 2018 with Takuma Sato – now Malukas’ teammate.

Formula 2 race winner Lundgaard said: “Looking at the test at Laguna, I wasn't as comfortable as Graham [Rahal, teammate]. We never really seemed to have the pace that we wanted to have. Looking at the whole season, I think we've been more comfortable on street circuits and road courses than we have on ovals for different reasons. We didn't have a very good race in St. Louis. Again, Graham seemed to have the pace. The car seemed to be quite edgy there.

“We need to make the most of it. David is on our tail. We got the last the last two races and have to score the maximum points we can. I'm sure we will have a good end to the season…

“There's always a rookie championship no matter what series you're racing in. But… I don't think it's a big topic in Europe. For sure the team has pushed me further and further to understand how much it actually means.

“Obviously coming into IndyCar, I hoped to be in a better position at this point in the season than we are. You can only hope for the best. I think we've had our ups and downs, we've had good weekends, some worse ones.

“You only get one shot at the rookie championship. You have to make the best of it. I think that's what's important about it, at this point now I know I'll be here next year. I mean, I know anyway I'm not going to get another shot at it, but I also know I need to learn as much as possible this year going into next year, but at the same time I want to end it on a high.

“Unfortunately David is pushing me extremely hard with his pace. I think it's going to be a tight battle at the end.”

Malukas commented: “Ever since the month of May came around, I feel like that's when we kind of flipped a switch, starting getting a lot better with the car, strategy, the racing, continued to go forward. After getting podium, having a really good race there and at Gateway, I think it's only helped it that much more.

“We also had a really good test at Laguna on Monday. I don't know… I feel like this West Coast swing might be good for us. It's been so tight. The field is just so strong. It's like we're going to still have to be at 110 percent if we want to get anything done.”

Malukas added that while he came into the series prioritizing enjoyment and progress, team owner Dale Coyne has applied the pressure to chase the Rookie of the Year award.

“It's always been in the back of my head,” said the Chicago-born 20-year-old. “It wasn't kind of my main goal. My main goal was to enjoy the IndyCar experience and learn as much as possible. But Dale was in my ear every day, ‘We need this rookie [award], go and get it.’ He was pushing me and driving me forward.

“Lundgaard definitely has been pushing us 100 percent, especially after the IMS performance. I was like, ‘Man, how am I supposed to get a podium? That's going to be tough.’ Part of the push in Gateway was having that in mind.

“Like I said, Dale is always in my ear that we really need it. A lot of pushing going on. In Gateway we succeeded under the pressure. Hopefully we can carry that into the last two rounds.”

Lundgaard seemed undaunted by his lack of experience at Portland, citing his IndyCar debut last August at IMS road course where he qualified fourth, and said he’d prepared for the track in a similar manner to the other tracks on the 2022 schedule with which he was unfamiliar.

“I think it's pretty much the same preparation as every track you go to,” he said. “I mean, looking at Indy GP last year, the one race I did, I basically showed up on Friday and drove practice. That's pretty much it.

“You try to look at certain issues to see if you can find some onboards, videos, do as much preparation as you can do. Speak to engineers, see what they have of experience at the track. Speak to my teammates, Jack [Harvey] and Graham… They've both been quite successful here in terms of sheer pace. They haven't got the result that I think they deserve. As a package, I think we will be there.

“For me, I enjoy coming to new tracks. I enjoy the challenge of going out there pretty much blind. We saw Nashville, I'd never been at Nashville, and we were real quick straightaway. The most I can hope for is that the car is in a decent window and we can fine-tune it from there, be at the better end of the field.”

Lundgaard seemed in two minds as to whether his lack of circuit knowledge, almost without exception this year, had held him back in his fight with a top driver who learned the courses on the Road To Indy.

“I'd say [Malukas] has the advantage having been to most of the tracks, done ovals before in junior categories,” said the Dane, a former Alpine (Renault) junior driver. “For me to come out here and just drive around in the big car straight away… I wouldn't say I struggled mentally, but it's obviously a tough task to come in and be expected to perform.

“I think there's been a few events this year where I've told my strategists to give me more information because we can be six-tenths off the pace compared to my teammates. I don't know where the pace is. These things we've kind of learned as a team, moved in that direction of helping me as much as possible early in the weekend. The pace has been there. Obviously we didn't need it in Nashville, which was nice. Seemed to be able to sort that out.

“For the last two races of the season, now I have a test at Laguna under my belt, I've never been to Portland. Now sitting here hearing that David has had a successful couple of races around here, for me, I need to be on the top of my game going into this weekend, be sure that together with the team we have the best package.

“I think for me the ovals are still where we need to improve. Personally I think I'm quite comfortable with street circuits and road courses. I've done that pretty much the whole of my car career. Ovals is still different. I think this is what has been tough this season.

“You only got one shot at it, at the rookie championship. You need to perform at your best and limit retirements. I think we've got the most out of it, but I'm sure there's a lot to learn. I think the whole winter we'll look into things to improve.”

Malukas, for his part, said the big advance for himself and the DCR with HMD team over 2022 had been with “race strategy and pit stops.”

He continued: “All that stuff is new to me. Although I've come through the feeder series, you don't do pit stops, strategies, fuel saving, tire saving. You don't really do much of that. All of that was very new to me. At the beginning of the season I was definitely very lost with all of it.

“I've managed to learn how to figure out how to do all these things, just following veterans like [Will] Power. He passed me on track [at WWTR]. Man, I got past again. ‘Wait, this is actually really good. I can follow Power's line, where he does this fuel saving.’

“From these moments I've managed to learn, learn how I can use all the tools I have from me, the team, Honda, how I can use those to help me as a driver.” 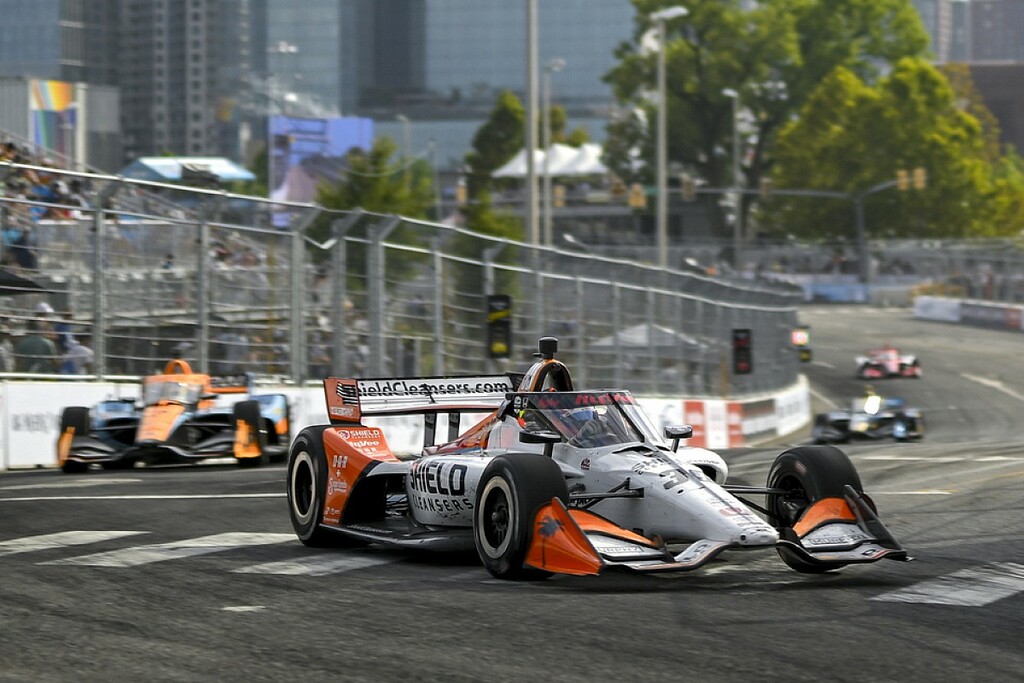 The other IndyCar title set to go down to the wire in 2022
All eyes are on the fight between Team Penske and Chip Ganassi Racing for the IndyCar drivers' title with two races remaining in 2022 at Portland and Laguna Seca. But the battle for Rookie of the Year honours between Christian Lundgaard and David Malukas is set to be just as…

Autosport
From analysis to the latest developments in health, read the most diverse news in one place.
IndyCar in Portland: Start time, how to watch, entry list & more

All you need to know ahead of the 16th of 17 rounds in the 2022 NTT IndyCar Series, the Grand Prix of Portland.

Will Power, Josef Newgarden and Scott McLaughlin looked scarily dominant in second practice at Portland International Raceway, covered by just one-tenth, but over two-tenths clear of their nearest opposition.

Will Power, Josef Newgarden and Scott McLaughlin completed a top three sweep of IndyCar second practice at Portland for Team Penske ahead of qualifying for the penultimate race of 2022.