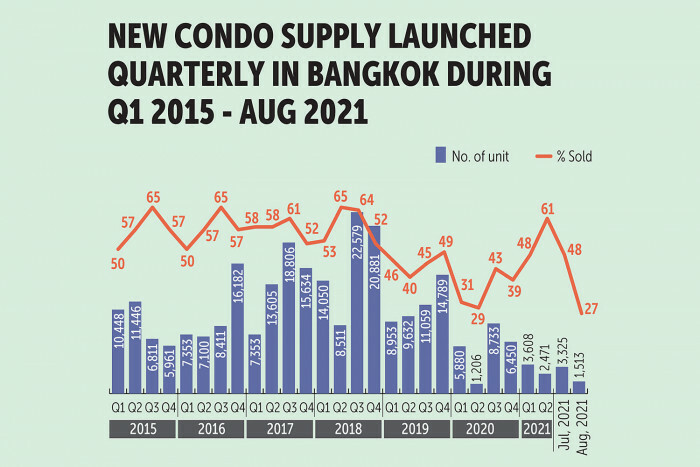 Low-priced condos with attractive designs near job clusters or schools continue to be popular as price-sensitive demand is strong amid poor market sentiment, according to property consultant Colliers Thailand.

Phattarachai Taweewong, Colliers' director of research and communication, said demand for low-end condo units was on the rise during the first eight months this year as this segment has the largest base of real demand.

"Not all projects have a good sales rate," he said. "Only those with a modern design attracting young buyers or those located near universities or industrial estates."

The average sales rate dropped to 27% in August despite lower condo launches because new projects were neither attractive nor in good locations like those in July, said Mr Phattarachai.

New condo projects launched in July comprised The Muve Ram 22 and The Muve Bangna of Sansiri worth a combined 1.16 billion baht, which both sold out.

Their locations are near industrial estates, shopping malls or educational institutions.

They attracted not only real buyers, but also investors buying for rent, he said.

Based on this success, Sansiri plans to launch new condo projects with much lower prices than The Muve brand. One project is named Condo Me near Navanakorn Industrial Estate in Khlong Luang district, Pathum Thani, said Mr Phattarachai.

According to Colliers, the low-priced condo segment comprised more than 50% of new condo supply launched in the first eight months this year for the first time in several years.

The average sales rate for new condo supply launched in the second quarter was the highest in 11 quarters, driven by low-priced projects, said Colliers.

He said condo market sentiment in the fourth quarter will remain unchanged from the third quarter despite easing Covid restrictions and an improving vaccination rate.

"Vaccination will have a very minimal impact on the condo market," said Mr Phattarachai. "Reopening is unlikely to boost the number of foreign buyers as many of them cannot fly."

Colliers forecast the total new condo supply launched in Bangkok in 2021 would be around 15,000 units.