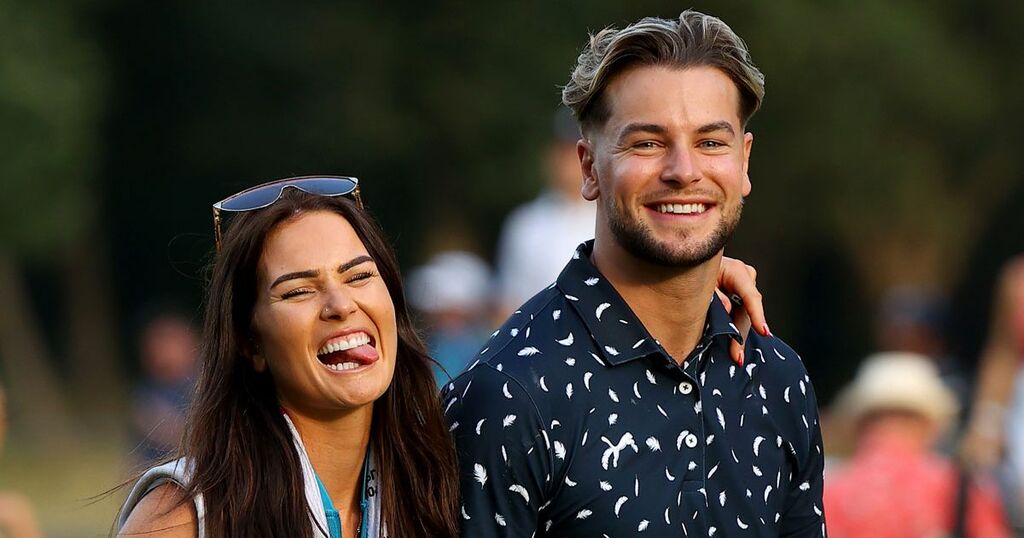 The former Love Island star looked the picture of happiness as he snugged up to his new squeeze at The BMW PGA Championship at Wentworth Golf Club in Virginia Water, Surrey, yesterday.

And the 28-year-old, who looked besotted with Annabel, teased in a photo “My wife @annabeldimmock”.

Chris wasted no time in planting a kiss on Annabel’s cheek as the professional golfer, 24, happily caddied for him at the prestigious tournament.

The happy couple looked relaxed as they walked the tournament together having gone Instagram official only last month.

Chris and Annabel laughed and joked as they enjoyed each other’s company, especially having just returned from their first holiday away together to Cornwall.

He was competing against the likes of fellow celebrities including One Direction’s Niall Horan, former Made in Chelsea star S pencer Matthews, Boyzone and Spiderman actor Tom Holland.

Annabel is usually the one swinging the clubs having been a professional golfer for six years.

But the pair were happy to share the limelight as their romance seemingly goes from strength to strength.

And it’s great news for Chris who had an acrimonious break-up with former Little Mix star Jesy Nelson in April 2020.

He admitted afterwards life after the break-up was a “s**tstorm”, but has now found love again.

“Don’t know where to start,” admitted Chris in a heartfelt post at the end of last month.

He shared a cute pic of the pair kissing on a cliff top on Fistral Beach, Newquay, with the sun setting in the background.

“It’s the closest feeling I’ve had to being in school again, when you crush hard and kind of don’t know what to do.

“The kind of girl, when I’d expect to get home from school and speak to on msn as the nerves got the better of me in the playground. I’m lucky, and I’m blessed, and I’m thankful @annabeldimmock.”

“She is insane,” gushed Chris in his latest Instagram post, sharing a sweet pic of the couple on the red carpet for the film premiere of Rise of the Footsoldier 5, which he stars in.

The film launched last week with Chris playing the role of a football thug as he makes his movie debut.