Lose yourself but not your nerve: how to stay alive as a T20 death bowler 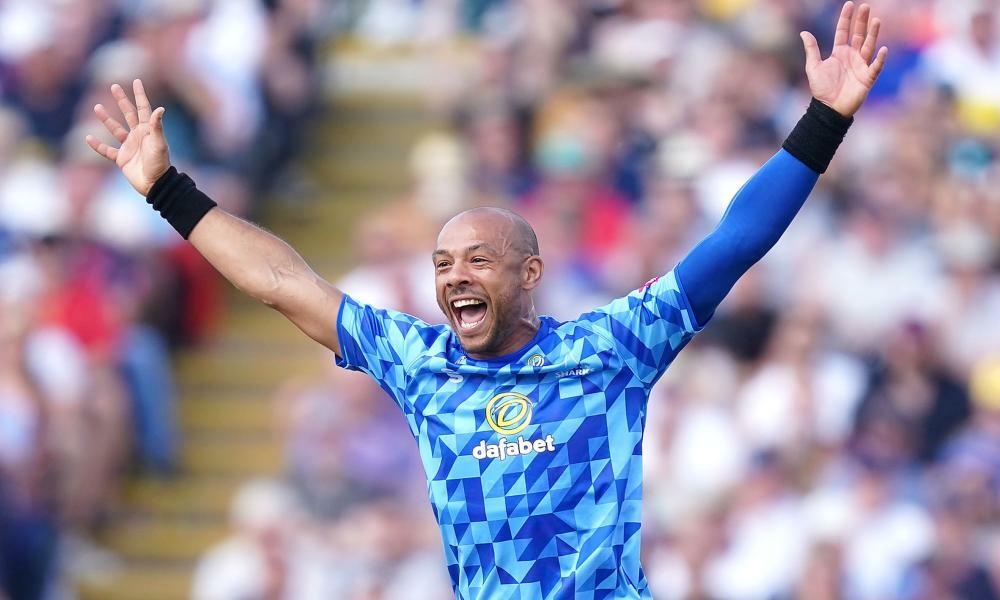 Lose Yourself, the soundtrack to Eminem’s autobiographical film about rap battles in mid-90s Detroit, might document life a world away from the hallowed turf of Twickenham or the manicured lawns of Lord’s, but the lyrical themes are catnip to the high-end sporting occasion.

The 2003 World Cup-winning English rugby side supposedly listened to the track on repeat in the dressing room; it was an instant favourite of the England one-day international team – their unofficial anthem for a good few years after its 2002 release. The ABC commentator Kerry O’Keefe could be heard drawling the lyrics, albeit sans chainsaw and hockey mask, as Steve Waugh approached his Bradman-levelling 29th Test hundred at the SCG in 2003. “Tugga” dramatically crunched the final ball of the day against England through the shadows to the cover boundary. Marcus Trescothick has described how he used the spoken word intro as a personal mantra to help him combat the crippling anxiety that curtailed his international career in 2006.

“If you had one shot, or one opportunity/To seize everything you ever wanted, in one moment/Would you capture it?”

These are the lines Trescothick used to sing to himself at the crease in his gently lilting West Country burr. Arresting stuff certainly, whether you hail from Michigan or Middle Chinnock. Trescothick went on to dominate the county game for another decade and more.

I’m reminded of those lines whenever a game of cricket goes down to the wire, the final few “death overs” teetering and tantalising until there is only one final act. When a bowler steps up to grasp the ball, the lyrics to Lose Yourself begin to swirl. As well as questions, many questions: What is their plan here? Their best delivery? What will the batter least like to face? Where are they positioning their gun-fielders? Are they actually enjoying this? Aren’t their palms sweaty? Legs heavy? Did they eat too much pasta for dinner last night?

Who better to pose them to than Tymal Mills, left-arm rapid and currently one of the finest death bowlers in Twenty20 cricket? Mills has plied his trade for a host of franchise sides around the world, from Quetta Gladiators in Pakistan to Hobart Hurricanes in Australia. He was an integral part of Southern Brave taking the inaugural men’s Hundred trophy. A quick email to Andy Zaltzman confirms Mills as a master of the art.

“Mills’s stats are incredible,” the Test Match Special statto confirms. He is right at the sharp end of the list of most economical bowlers in global franchise cricket. Mills has delivered 655 balls across 72 matches over the past five years, conceding 808 runs at an economy rate of 7.4 runs per over. Pretty impressive when you consider the bloke at the other end is invariably trying to smash him out of the ground. Even more impressively, Mills has taken 51 wickets at an average of 15.84, duking it out with the best – Rashid Khan, Jasprit Bumrah, and Adam Milne. No wonder he got the call-up to be a part of the upcoming T20 World Cup in the UAE.

Mills showcased those nerves of steel by talking eloquently about his craft over his carphone while weaving through rush-hour London traffic earlier in the summer: “The ball is coming out nicely, it’s just a case of trusting the body again, which has been a big thing, a big barrier to get through, trusting that it isn’t going to hurt and then I can fully concentrate on my skills.”

Those skills that Mills has – as a left-armer capable of bowling at 90mph, creating a different angle for the batter from over or around the wicket, with a deceptive slower ball as part of his armoury – give him several unique selling points.

“It’s just a case of playing to my strengths, I’m able to bowl quickly, which perhaps gives me slightly more margin for error in those death overs.”

Those same strengths meant he was never far from England’s thoughts, even if it might have felt like it during the periods of injury that he has faced since playing a handful of T20 internationals between 2016 and 2018.

Mills does things differently at the death. Eschewing the more traditional yorker to bowl back of a length, “I call it a heavy length, box height.” He feels this is a more replicable skill for him and results in a delivery that lies outside the traditional hitting arc and is therefore trickier to score off.

“Bowling at the death is so high pressure. You have to embrace it and also be confident of what you are trying to execute.”

The yorker at the base of the stumps has traditionally been seen as the way to go at the death. If executed perfectly it is still a hard ball to hit and has the eye-catching bonus of splattering stumps if it sneaks through. But the margin for error is seen as quite high: overpitch and it’s a full toss, not quite full enough and it’s a half-volley.

The modern game has evolved. Tim Wigmore’s recent piece about the lengths T20 batters go to in order to improve their power and ability to hit a cricket ball ever further was eye opening. All “over” and “under loading”, “swing planes” and “hitting zones”. Just reading it makes you want to don a pair of NormaTec compressed air massage boots.

All of which means that a bowler has to constantly develop. Possessing a variety of deliveries to keep the person 22 yards away guessing is crucial. Wide yorkers that are unreachable when a batter backs away, a heavily disguised slower or knuckle ball that floats like a maple copter rather than the 90mph missile the batter is setting themselves for. Pace-off, pace-on, hitting the pitch or kissing the surface. You can practise the skills, but can you prepare for those high-pressure scenarios? Mills doesn’t think so.

“You can’t really replicate the intensity of those death overs in a training session, there is never the same amount of jeopardy. Death bowling for me is all about attitude, you’ve got to want to bowl those big overs, be the superstar and the match-winner.“The batsman can get lucky even off good balls, you are going to go for runs, that is a given. You can’t give up in T20 cricket. If you take a wicket with your next ball then you can change the game. You’ve got to relish the fight.”

“I look back and I haven’t often bowled that 20th over to win a game, often I’ve done the 19th over as you don’t want to leave an over in the hutch. It’d be nice to have that moment in a big game and to seize it.”

Sounds familiar. Mills might get his one shot in Dubai, rather than Detroit, come 14 November. He’ll be confident. After all, as the song says: “Success is my only motherfucking option.”

• This is an extract from the Guardian’s weekly cricket email, The Spin. To subscribe and get the full edition, just visit this page and follow the instructions.