Dramatic images have shown the moment a lorry burst into flames on the M74.

Emergency crews rushed to the scene of the blaze, which took place at junction 4 at Maryville around 3.15pm on Monday May 16.

Photos show a plume of thick, black smoke billowing from the HGV as it is engulfed by the inferno.

Further images show the burnt out vehicle once the fire has subsided, with firefighters armed with breathing apparatus and hoses tending to the charred remains.

One eyewitness, who lives around 40 metres from the edge of the motorway, told the Record that she thought "a gun had gone off" as the noise from the blast was so loud.

Gemma Elizabeth Divers said: "I was working from home and I heard a faint popping noise and then the loudest explosion I've ever heard.

"I genuinely thought someone had fired a gun.

"When I turned around to look at the motorway, all I could see was the HGV up in flames.

"It was terrifying to see."

The incident also caused significant delays to drivers on the busy motorway, with Traffic Scotland reporting a wait of at least 20 minutes for those travelling southbound.

No one was injured in the blaze.

A Scottish Fire and Rescue Service spokesperson said: "We were called at around 3:15pm to numerous reports of a lorry on fire just before Bothwell services at junction 4 Maryville.

"We mobilised three fire appliances to the scene.

"The fire was extinguished and there were no reported casualties." 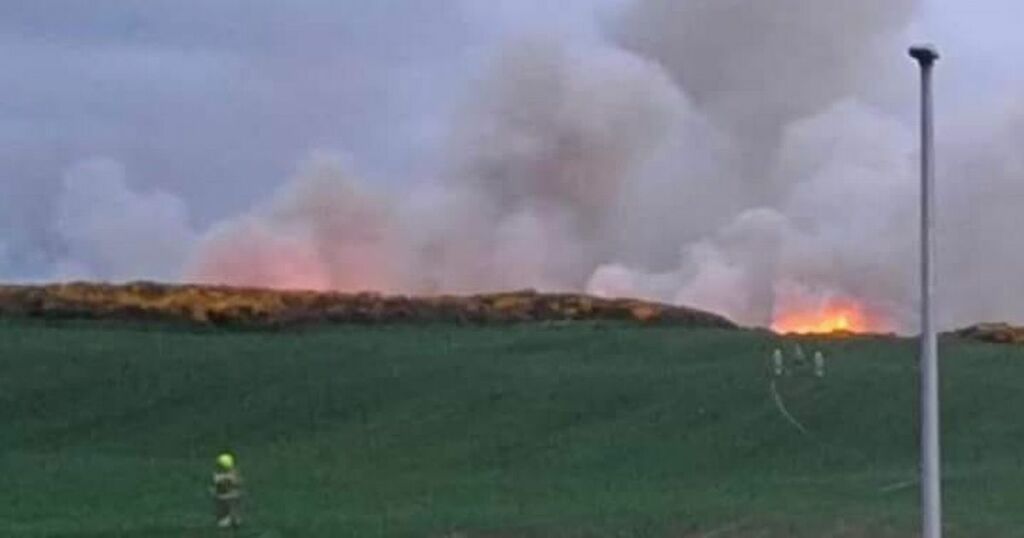 Fire crews work overnight to battle huge wildfire ripping through Scots hills
Firefighters scrambled to the A98 between Banff and Macduff, Aberdeenshire, at 2.05am today.

The air ambulance was called to the scene

Emergency crews were scrambled to the blaze on Great Western Road, after receiving the alarm last night.

Manchester Evening News
One subscription that gives you access to news from hundreds of sites
Mangotsfield fire: Everything we know after huge blaze at Sort It recycling centre