The James Space Webb Telescope’s NIRCam instrument zoomed in on the Large Magellanic Cloud to capture an intergalactic view of a glittering star field.

Redditor u/SpaceGuy44, an astronomy graduate student at a university in California, processed the image from raw data on the Webb archive. Once the data from Webb's observations is released to the public in raw data form, he tells Inverse, “amateurs and passionate astronomers like me jump on the chance to process them as soon as they're released.”

"I'd say that most people that process these images are amateurs unless the images are released by NASA themselves or another research team,” he says. “While I'm not an amateur, I just had a lot of passion and free time to do this since I'm on summer break from grad school." He also recently shared an image of a double-barred spiral galaxy, NGC 1365.

Hi there, neighbor — These stars represent just a small patch of the nearby galaxy, which spans about 32,000 light years from one edge to the other. That’s a vast distance, but still less than a third the breadth of our own galaxy, which measures almost 106,000 light years across. The Large Magellanic Cloud, or LMC to its friends, is a dwarf galaxy, and it’s actually orbiting the Milky Way at a distance of about 163,000 light years away.

Astronomers call the LMC an “irregular” galaxy, which means it has no particular shape — but it still holds the warped remains of structures that were once spiral arms and a central bar, which hint at its eventful past. The LMC was once a barred spiral galaxy, but the gravitational pull of its smaller companion — the aptly named Small Magellanic Cloud — and the much larger Milky Way have distorted those features into the irregular shape we see today.

An ancient act of galactic cannibalism, when the LMC’s gravity drew in an even smaller galaxy and absorbed it, may also have played a small role. (We did say the LMC had an eventful past.)

And in 2.4 billion years, the stars in this NIRCam image will be part of the Milky Way. The LMC is on course to smash into our galaxy, so just as the LMC absorbed a smaller galaxy, the Milky Way will absorb the LMC. About 2.6 billion years after that, those stars will be part of the enormous elliptical galaxy formed when our Milky Way collides with the Andromeda Galaxy, which is now about 2.5 million light years away and slowly spiraling closer with each orbit.

Can you spot the galaxies? — Unlike most (but not all) of the images we’ve seen so far from Webb, this one was taken for engineers rather than for scientists; it was part of an effort to calibrate the NIRCam instrument early in the telescope’s working life.

“Despite the purpose not being to study the LMC, there’s still one very interesting thing you can see in the image,” wrote u/SpaceGuy44. “Unlike with images from optical telescopes, you can see background galaxies through the star field.”

If you look closely at the image, you can see a myriad of galaxies seemingly scattered among the stars; most of them show up as spirals or ovals in yellowish hues, compared to the whiter pinpoints of the stars. But they’re actually millions of light years more distant than the stars of the Large Magellanic Cloud.

To a telescope that views the universe in the same wavelengths as a human eye, those far-flung galaxies would be invisible, hidden behind clouds of dust and gas in the intervening distance. But because Webb sees in longer infrared wavelengths, it captures the light that passes through those dust clouds, allowing a clear view of what lies beyond.

The result is that we’re sitting on the edge of the Milky Way Galaxy, looking at a dazzling array of stars in a neighboring galaxy — and through it to even more distant galaxies on the other side.

The brightest stars in the image appear with six long, spiky points and dark centers. Those spikes are thanks to diffraction from Webb’s six-sided mirror segments, and the slightly spooky darkness in their centers is actually because the stars are so bright that their light overwhelms the telescope’s detectors. 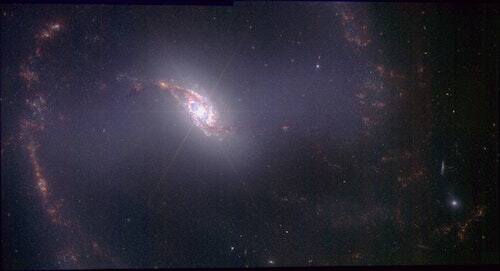 Look! New Webb Telescope image reveals a rare galaxy close to the Milky Way
The Great Barred Galaxy lives up to its name in its Webb image debut.

Inverse
From analysis to the latest developments in health, read the most diverse news in one place.
Largest-yet image from the Webb Telescope reveals new stunning galaxies

The newly-processed images are replete with galaxies near and far.

Inverse
Look at What Happens When Two Galaxies Collide

The stars sail past one another, and the night sky would probably be fabulous.

Inverse
One place to find news on any topic, from hundreds of sites.
Youngest exoplanet ever found could settle a massive astronomical debate 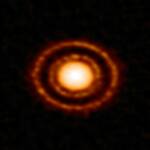 How do planets form? This infant planet could give us key insight.