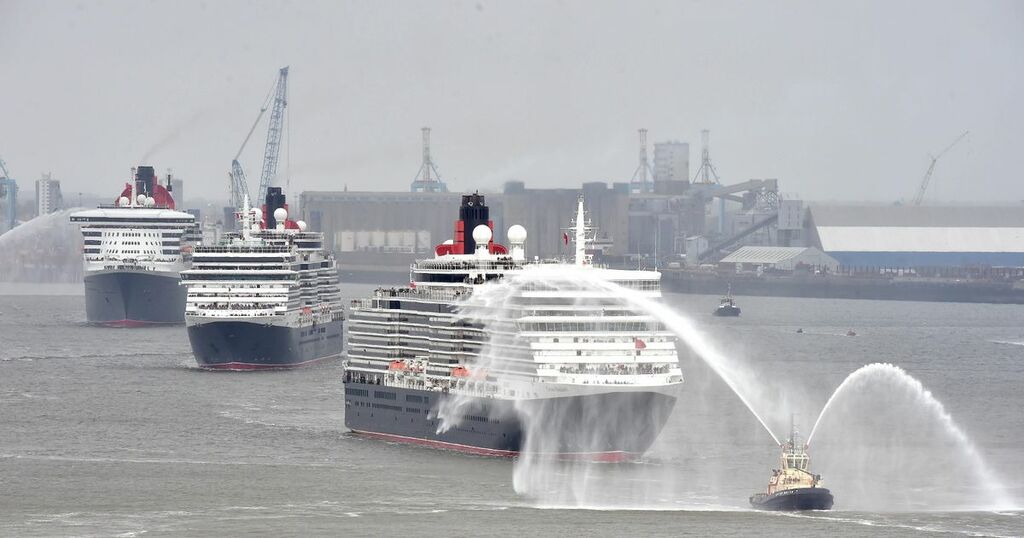 Over the years Liverpool’s iconic waterfront has welcomed some of the biggest and most famous boats in the world.

From world class ocean liners to some of the UK’s biggest warships, no matter what comes to Liverpool’s waterfront it always draws a crowd.

These are some of the most impressive vessels to visit our city over the years.

In May 2015, the River Mersey played host to three incredible ocean liners in spectacular celebrations for the Cunard shipping line's 175th anniversary and its long association with the city.

Thousands of people gathered at Liverpool’s Pier Head for two nights of spectacular fireworks displays as part of the Mersey River Festival.

An estimated 50,000-strong crowd turned out on the first day as the document confirming the Cunard Line was being given the Freedom of the city was signed on board.

Even when they left port, The Queen Victoria had a final surprise, wowing the crowds by turning 360 degrees in the Mersey while music, including songs from The Beatles, played.

MSC Virtuosa, the newest ship of any cruise line in the British Isles this year, was among the first vessels to be welcomed back to Liverpool Cruise Terminal in 2021.

MSC Virtuosa has its own yacht club, where guests can indulge in the exclusive luxury of a private club, as well as suites which feature private whirlpool baths, stunning views across the bow of the ship and MSC Cruises signature Swarovski crystal staircases.

The liner also has onboard the first futuristic, immersive experience at sea - Rob, the robotic bartender. Rob is a humanoid robot with different facial expressions, a voice, and the ability to move his arms, body and head in a natural way to give the impression that a real person is preparing a cocktail.

Rob can speak eight languages and prepares signature cocktails, with each served in a custom-designed futuristic glass that guests can collect as a lasting souvenir of the MSC Starship Club experience.

The ship was berthed at the south end of Liverpool Cruise Terminal Berth next to HMS Mersey.

Plymouth based survey Ship HMS Echo was launched at Appledore in Devon in 2002, and was designed to carry out a wide range of survey work, including support to submarine and amphibious operations.

HMS Echo achieves this through the collection of oceanographic, hydrographic and bathymetric data, which includes analysis of the ocean, its salinity and sound profile.

She was the first Royal Navy ship to use azimuth thrusters, where the propellers are part of a swivelling pod, allowing for precise manoeuvring.

This awe-inspiring warship docked at the Liverpool cruise terminal on February 28 last year.

The 65,000 tonne aircraft carrier is one of the most powerful surface warships ever constructed in the UK.

The ship's flight deck is 70 metres wide and 280 metres long, which is enough space for three football pitches.

The ship has a 700-strong company which can increase to 1,600 with aircraft on board.

Thousands of people from all over the UK visited the warship during her week-long stay in the Mersey with nearly 13,000 people able to go on board the ship for the very first time and have a look around the aircraft carrier's huge hangar.

At around 4pm on March 6, HMS Prince of Wales set sail as an F35 fighter jet flew by overhead as flares and pyrotechnics were shot into the sky to mark her departure.

Crowds of people on both sides of the Mersey, at Princes Parade and the Pier Head in Liverpool and at Wallasey and New Brighton in Wirral, gathered to wish her farewell.

February 2020 was a great month for maritime enthusiasts as it was also the same month Virgin's luxury cruise liner, Scarlet Lady, came into port.

From Liverpool, Scarlet Lady was to set sail to New York and Miami, to make her maiden passenger voyage around the Caribbean in April as part of a 37 day tour.

However, the voyage was postponed by four months to 7 August, due to the coronavirus pandemic.

The 2,700 passenger liner is the first ship in Richard Branson’s new luxury Virgin Voyages fleet, which aims to redefine the travel industry by unveiling cruise ships which have the same luxury you'd expect of a boutique hotel.

On board, the ship boasts everything from lavish Rockstar Suites to swish restaurants and elegant bars, as well as a gym and spa.

There is also a deck featuring a 220 square foot area of triple netting where passengers can bask in the sunshine.

The ship operates exclusively as an "adults-only" cruise liner for guests aged 18 and over, sailing mainly four-to-five-night Caribbean itineraries from Miami, Florida.

Perhaps not as grand as an ocean liner but the PS Waverley, the world's last sea-going paddle steamer, made a brief stop in Liverpool on its way to North Wales on August 27, 2014.

The Waverley arrived on the River Mersey shortly after 9am and pulled into the Liverpool Cruise Terminal to collect more than 550 passengers before paddling away again around 10.30am.

The vintage paddle steamer which was built in 1947 paid a second visit to the Mersey on September 1, 2015.

The huge Disney themed cruise ship has paid several visits to Liverpool over the years.

The ship has 20 bright yellow lifeboats which, along with the ship's black, red, and white colours match the colours of Mickey Mouse.

Keeping with the Disney theme, the ship's horn blast plays an excerpt from their famous flagship tune, “When You Wish Upon a Star".

While the ship has all of the luxuries you would expect on a cruise liner, children are entertained throughout the day by a whole host of classic Disney characters like Mickey to superheroes from the Marvel films.

The giant luxury cruise liner is another vessel that has paid several visits to Liverpool, the latest being August 9, 2017.

The sheer scale of the ship is dizzying, with her 17 decks, including the elevated Skywalkers disco, which is cantilevered above the ship like a giant pram handle.

Caribbean Princess, owned by Princess Cruises, has a capacity of 3,600 passengers in 900 balcony state rooms and a deck of mini-suites.

The $500m ship was built in 2004 and was the first Princess Cruises liner with an outdoor giant film screen.

The last time the Navy's Invincible class aircraft carrier was on the Mersey was May 8, 2013.

Larger than her sister ships Invincible and Illustrious, the 20,000 tonne Ark Royal is fitted with four Olympus gas turbine engines, propelling the ship in excess of 30 knots.

T he ECHO has launched a new 56-page nostalgia supplement in print. It's packed with photos from the recent past and the not-so-recent, from shopping, fashion and music to the Albert Dock – plus an elephant on parade in Woolton. You can order a copy here.

The first time the Navy's flagship vessel visited Liverpool was in 2008 the year the city was the European Capital of Culture.

Speaking at the time, Ship Commander Steve Pearson said: "Capital of Culture year is the perfect opportunity to visit and show the flagship off to the people of this most hospitable of cities.

"We have quite a few locals among the crew, but Liverpool has always been a very welcoming place for sailors so we are all looking forward to getting ashore and meeting people to get a taste of what is clearly a fabulous year for the city."