UZHHOROD, Ukraine — Dressed in black, the actors moved around a sparse rehearsal room preparing a new play — the story of a dissident Ukrainian who died in a Russian prison camp decades ago. As they took a break, they gathered in a circle with their arms around each other, laughing and chattering.

Though the play is set decades ago, for these actors, the subject is close to heart, and the mere fact of rehearsal a triumph. They survived the siege of Mariupol by Russian forces earlier this year — and the destruction of their home theater.

Mariupol’s Academic Regional Drama Theater was destroyed on March 16 by a Russian airstrike in the midst of the weekslong siege of Mariupol, one of the earliest instances of Russia’s shocking brutality in the Ukraine war. Before the attack, the word “children” had been spelled out as a warning in large white lettering on the ground outside. Hundreds of people had sheltered in the theater during the siege, among them four members of the theater company.

On Thursday, an Amnesty International report called the attack a “clear war crime,” determining that the strike killed at least a dozen people “and likely many more.” The precise casualty count has been impossible to determine because the city remains under Russian control after falling to those forces in late May.

Vira Lebedynska, 64, an actress, recalled the day the theater was hit.

“There was an explosion, walls started crumbling and then I heard screams,” Lebedynska said. “We couldn’t move.”

She sought safety in a basement office with a colleague and that woman’s family, but even before the strike, food and water were running low. Lebedynska said that nearly 1,000 people were gathered in the theater when the missile hit, and that she believed hundreds died.

After the initial impact, her colleague’s husband walked up a crumbling staircase and returned to say: “There is no theater anymore.”

Eventually, Lebedynska and her group fled on foot to a nearby town, and joined a humanitarian convoy that brought them to safety.

In all, 13 members of the Mariupol troupe survived the weeks of bombardment of their city. Some were removed to Russian filtration camps; others were displaced from their homes. Some took refuge in cellars. Some were unable to bury relatives who died alongside them.

In recent weeks, the group has reconvened in the western Ukrainian city of Uzhhorod — where they live together in a dormitory — to rehearse the new play. It is based on the life and works of Vasyl Stus, a Ukrainian poet, human rights activist, dissident and nationalist hero who died in a Soviet prison camp in 1985.

He lived in the Donetsk region when it was part of the former Soviet Union, and was persecuted for his efforts to develop Ukrainian literature and language and for his outspoken opposition to Russian rule.

He was put on trial twice and died while on a hunger strike in the Soviet prison in 1985. Ukrainian independence arrived just six years later, in 1991.

The Mariupol theater itself has wrestled with the legacy of Russian dominance in the region, which often came at the expense of the Ukrainian language and culture. Two years ago, the theater switched to performing in Ukrainian, rather than Russian. The actors, many of whom speak Russian, have now committed to working exclusively in Ukrainian and see themselves as part of a broader cultural revival.

Opening night of the new play is planned in the Uzhhorod theater in mid-July. Then the performers hope to take the show to a festival in Krakow, Poland, and possibly tour.

“It’s a bit scary to stage this performance,” said Kolosovych, the 58-year-old director, who wrote the play in collaboration with others in the company. “The world expects a premiere from the Mariupol theater company.”

Anatoliy Shevchenko, 68, spent decades acting with the Mariupol troupe. During the siege, he hunkered down in his basement for weeks alongside his elderly mother and sister — with no electricity, and limited food and water. He heard about the theater’s destruction over the radio.

Shortly after, his mother died of a heart attack. He laid her body out on the sidewalk, covered in a sheet, alongside six other corpses, he said.

“I feel like a monster for not being able to bury my mother,” he said through tears.

Eventually, Shevchenko said, Russian forces, under the barrel of a gun, took him and his sister from their home and sent them to a filtration camp in Novoazovsk, a city in the Donetsk region of Ukraine that was occupied by pro-Russian forces.

“They think they are saving us,” he said of the Russian troops. In the camp, he was fingerprinted, questioned and treated like a criminal, he said.

They were then sent to Russia but made their way out through Georgia, then on to Germany, Poland and back to Ukraine.

After losing so much, being a part of this community reminds him of who he is, he said. But the new play is also offering him a fresh start. He said he never wanted to return to Mariupol.

Shevchenko flipped easily between a number of different characters in the performance. In one scene, he delivered one of Vasyl Stus’ most famous poems in a booming bass that filled the rehearsal room.

“How good that I am not afraid of death / And do not ask how heavy is my cross,” he recited.

Nataliia Metliakova Marchenko, 63, who has acted with the theater company for more than 40 years, was born in Russia but her parents moved to Mariupol when she was a child. She still holds a Russian passport.

She spent weeks alone in her home as the city was bombarded before her son’s friends helped her get to the West.

Some actors from the company have stayed in Mariupol, she said, and are involved in an effort by Russian authorities to reopen the original theater in September with performances in Russian. That plan has been widely criticized in Ukraine; Petro Andryushchenko, an adviser to the city’s mayor, compared it to “a dance on the graves.”

Dmytro Murantsev, a 22-year-old actor, sought refuge with his girlfriend and her mother in the theater’s basement for weeks before the strike. He said it became so crowded that people had to sleep in shifts.

“We thought we would die there,” he said.

But the fighting was so intense in the surrounding area that they couldn’t leave. They marked the days on the wall. “We were losing our minds,” he said.

The day of the attack, they heard a jet buzz overhead and felt the earth shift beneath them, he said. Dust from the floor flew through the air. The walls trembled.

“People were shouting for help, trying to get out, dying in front of us,” he said. “Children were trying to dig out their parents.”

He saw his girlfriend shout “I hate him,” over and over — referring to President Vladimir Putin of Russia — but he couldn’t hear her as the noise of destruction drowned everything out. She too survived, he said, but fled to Germany with her mother and her cat.

Even as the weeks have passed, Murantsev still finds himself stuck in that moment. “I am still processing it to be honest,” he said. 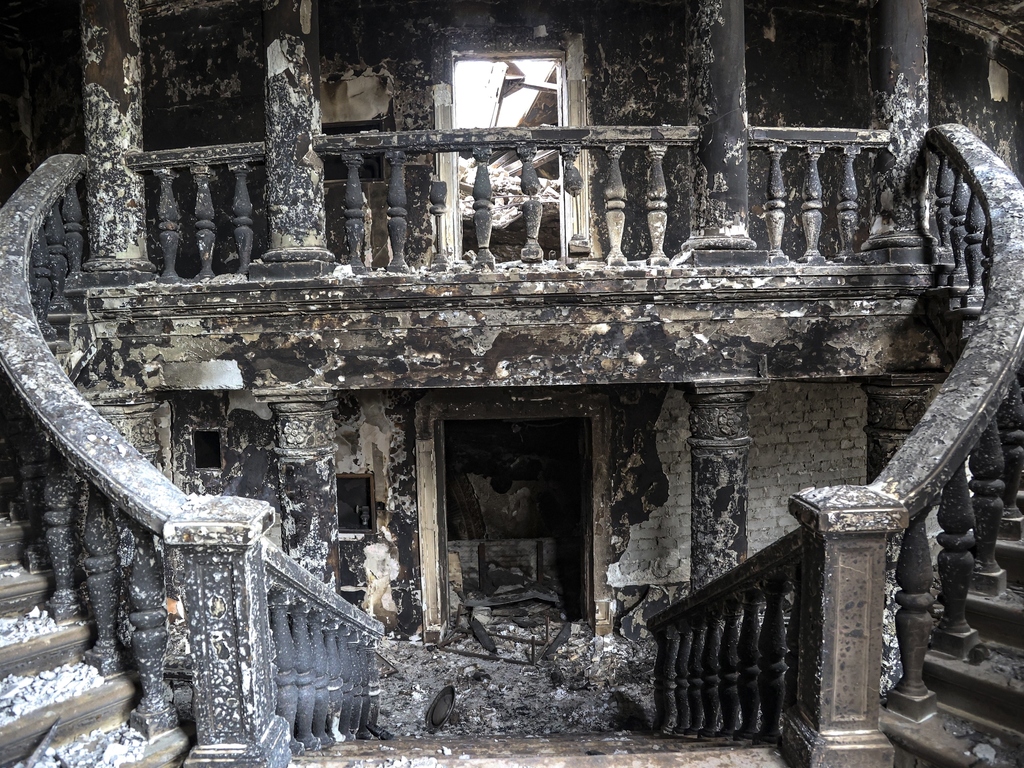 Mariupol theater bombing was a clear war crime, Amnesty International says
Hundreds of civilians were sheltering in the drama theater during the March siege of Mariupol, the southern Ukrainian port city…

WEKU
One subscription that gives you access to news from hundreds of sites
Deadly airstrike on Mariupol theatre a ‘clear war crime’, Amnesty inquiry finds