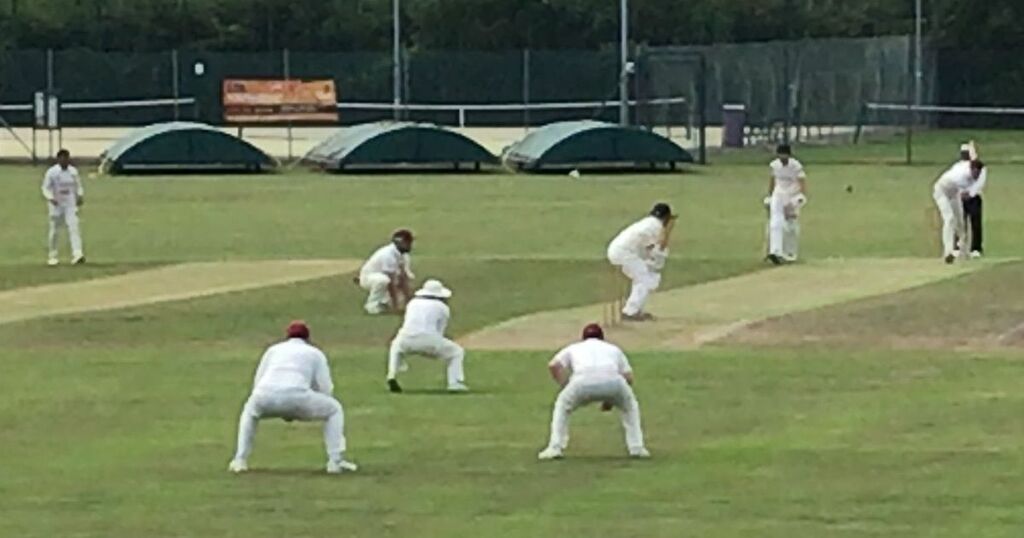 They had to share the spotlight with a wedding reception and their dressing room with a rugby team - but Division One promotion hopefuls Birkenhead Park got to keep all the points to themselves at Liverpool on Saturday.

The hosts put on a warm welcome in more ways than one, subsiding for 92 as the guests arrived, then failing to crash the party as the visitors cantered to victory by nine wickets, serenaded by a wedding singer reeling off the classics.

“We rolled over,” as Liverpool’s stand-in skipper Dan Kelly put it - not much of a speech, but no-one present would have had any reason to object.

More than one figure dressed in white was the centre of attention.

Alex Baker kicked things off for the visitors with a fiery, threatening opening spell that saw off both openers and probably deserved more.

Then Satyajeet Bachhav settled into a groove from the Pavilion End, finding turn, bounce and the outside edges of Alex Harper, Jared Clein and Liam Naylor.

The clatter of wickets slowed after drinks but scoring didn’t get any easier. Bachhav sneaked one through Kelly’s defences then persuaded Adam Dunsmore into an ill-advised foray out of his crease to earn his ninth five-wicket haul of the season - he finished with 5/37.

No-one stuck around longer than Matt Douglas, or scored more than his 15 runs - he fell to a lightning leg-side stumping by the impressive Ste Hird off the brisk medium pace of David Nevin, who yorked Dan Clubbe three balls later to wrap the innings up.

Like Bachhav, Hird claimed five victims - his keeping was handy and his chatter relentless throughout.

“Once we got on top, I think we just managed to stifle them,” said Park skipper Tom Foster.

“We were really good - from ball one, we were on it.

“Alex bowled really well, and Satyajeet was just like he’s been all season.

“Ste’s had some bad injuries. This is the first year he’s kept since 2018 and he’s top class - his leg-side stumping, two great catches off Satyajeet, his energy… he’s just everything you want.”

If Park’s bowlers had made the wicket look tricky to bat on, their batters made it look easy.

Michael Barnes led the way with some lusty back-foot blows and a delicious cut off Kelly; Bachhav took full advantage when Clubbe overpitched at the other end. One cover drive drew a raucous cheer from the wedding guests - embarrassingly for the bride and groom, it overshadowed their grand entrance, which happened at exactly the same time.

By the time Barnes aimed one shot too many at Clein and picked out a diving Naylor at deep mid-wicket, the back of the chase was thoroughly broken; Alex Harris scored 27 of the last 29 runs to wrap up a convincing win and leave his side in a strong position in the Division One promotion race.

Foster added: “The other teams up there are all good teams, and they’re going to keep winning, so we’ve just got to do what we’ve got to do - keep getting 25 points.”

For Kelly, who’d chosen to bat first, it was a chastening afternoon as an inconsistent, mid-table season draws towards a close.

“We knew they’re an attacking side and they’d come at us hard in the chase,” he said. “We thought maybe we could try to win the game that way.

“But there’s no two ways about it - we didn’t give a good account of ourselves with the bat or with the ball.

“This has just been a very, very bad day at the office - the season as a whole has been OK. We’re a youngish team in terms of experience, but there’s ability in the side.

“Given that we came up in 2019 and there’s been a few changes since then, it’s been a consolidation season. And on the whole, it’s been OK.”

Elsewhere in Division One, Lytham batted Ainsdale out of the promotion race, racking up 245/6 thanks to Edward Fiddlers’ 70 and contributions from Joshua Holden and Zia Ur Rehman; the Afghan slow left-armer then took an astonishing 9/36, his 10th five-for of the season, to wrap up a 128-run win that keeps his side in with an outside chance.

Rainford remain hot on Park’s heels in third thanks to a 29-run win over Northop Hall. William Threlkeld, brother of Manchester Originals and NW Thunder keeper Ellie, top-scored with 61 in the hosts’ 164; skipper John Dotters’ 5/54 did the rest.

Newton-le-Willows have one and a half feet in the Premier Division after a comfortable win over Fleetwood Hesketh. Afaq Ali Sartaj’s 6/39 ran through the hosts for 105, before Ben Walkden’s 71 guided his side to an eight-wicket victory.

St Helens Town will be a Division Two side next year after a home defeat to Colwyn Bay. Ross Hudson hit 87* and Ryan Westwell 62 to help the Welsh side pile up 225/5; the hosts never looked like getting close once they slumped to 4/3, and a further collapse from 68/5 to 74 all out sealed their fate.

Old Xaverians still have a chance of saving themselves after they earned a 67-run win over Highfield, whose early promotion challenge seems a long way in the past now. Xavs’ Shaun Haigh hit 51 to help them recover from 72/6 to 159 all out; captain Mark Doyle’s 5/16 wrapped up the win.

Northern need just 13 points from their remaining two games to confirm their ECB Premier Division title, after a 111-run win at Rainhill.

Sefton Park’s relegation, long since on the cards, is now a certainty. Their 78-run defeat at home to Leigh summed up their season - early inroads reduced the visitors to 21/3, but the bowlers couldn’t keep up the pressure and Mattie McKiernan struck 110, backed up by Matty Hurst’s 77, to lift the total to 223/3. Kemar Smith’s 65 and Ben Percival’s 46 raised hopes of a stirring chase, but Alex Mason’s 6/30 quickly doused them.

Firwood Bootle eased their relegation fears with a crucial 59-run win at New Brighton. The long-awaited debut of Lancashire’s Owais Shah saw him top-score with 89 in his side’s 200, as Ashraf Nawab took 5/56; Scott Butterworth took 5/47 to send the 2019 Champions 22 points clear of the bottom two.

Things look bleak for Southport & Birkdale, who have a mountain to climb after Ormskirk chased 211 for an eight-wicket win. Taylor Cornall’s unbeaten 118 did the damage, after Jack Carney and David Snellgrove made half-centuries for the hosts.

Formby’s Ollie Sutton struck his second century of the season, hitting a six to finish on exactly 100 as his side chased 169 to beat Wigan without losing a wicket. Skipper James Seward played a supporting role with 59*; earlier, Sutton had claimed 5/38 to help dismiss the hosts.

Wallasey’s Sumit Ruikar topped 100 wickets in all competitions for the season by taking 7/83 to seal his side’s 39-run win over Orrell Red Triangle. Jamie Crawley’s 51 was the top score as the visitors set a target of 191.

Sunday’s final Covid catchup of the season saw Leigh chase 169 for a four-wicket win over Ormskirk. Adam Shallcross’s unbeaten 57 did the job, after John Armstrong’s 52 had set the target.

Caldy and Spring View occupy the promotion spots in Division Two. But with the Wigan side only having one game left, Maghull - who had the weekend off - will fancy their chances of breaking in.

Caldy’s comfortable 92-run win over Prestatyn means one win from their last two games will seal a spot in Division One.

View beat Parkfield Liscard by five wickets thanks to Suleman Khan’s 56, with the Wirral side’s Zulqanain Khan having scored 96 out of their 170. Harry Clegg took 5/21.

Norley Hall are certain to finish bottom of the pile thanks to Sutton’s four-wicket win; Ben Scott’s 6/38 restricted Hall to 142, before captain Joe Noctor led the chase with 51.