Liverpool tonight will once again battle Real Madrid in the Champions League final.

The Reds have played in every possible match this term, reaching the final in all three knockout competitions, and their focus is now on adding European glory to the FA Cup and Carabao Cup. Liverpool’s quadruple hopes are over, after Manchester City’s dramatic Premier League title win, but the Champions League is far more than just a consolation prize.

In a repeat of the 2018 final, Jurgen Klopp’s side face Real Madrid and they will be hoping for a very different outcome. Gareth Bale scored twice that day in a 3-1 win for Real - that must feel a long time ago for the Welshman who brings his time in Spain to an end this summer.

It’s been an incredible run to the final from the LaLiga champions, who have looked almost certain to be knocked out on more than one occasion. That was the case in the semi-finals against Manchester City, as Rodrygo produced two stoppage-time goals in no time at all to take the tie to extra-time, where Karim Benzema finished the job.

What we’ve seen from these two sides throughout the season would suggest it could be a final full of goals and last-minute drama in Paris.

Liverpool vs Real Madrid is scheduled for an 8pm BST kick-off time tonight, Saturday May 28, 2022.

The Stade de France in Paris will host the match.

Where to watch Liverpool vs Real Madrid

TV channel: The match will be televised on BT Sport 1. Coverage begins at 6pm BST, two hours before kick-off.

Live stream: BT Sport subscribers will be able to watch the match online via the BT Sport website or app. The game will also be available for free via BT Sport’s YouTube channel.

Live blog: You can follow all the action via Standard Sport’s live blog, with James Robson in Paris to provide expert analysis.

Predicting Real Madrid’s matches in their run to the final has been an impossible task. Ancelotti’s side had no right to beat PSG, had to dig deep against Chelsea and then pulled off an astonishing comeback to get past City.

Liverpool go into it as favourites and rightfully so after a stellar season competing on all fronts and can cause Real’s backline real problems in Paris.

Benzema and Vinicius Jr will fancy their chances of getting success against Liverpool’s high line, but the Reds are the more complete team and are well placed to secure a third trophy of the season.

Real Madrid are unbeaten in the last five meetings between the sides, including that 2018 Champions League final win and last season’s quarter-final tie. 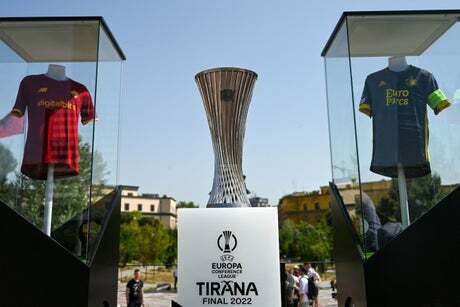 Evening Standard
One subscription that gives you access to news from hundreds of sites
Real Madrid XI vs Liverpool: Confirmed starting lineup and team news for Champions League final

Real Madrid have no injury concerns for tonight’s Champions League final showdown with Liverpool as David Alaba returns to start.