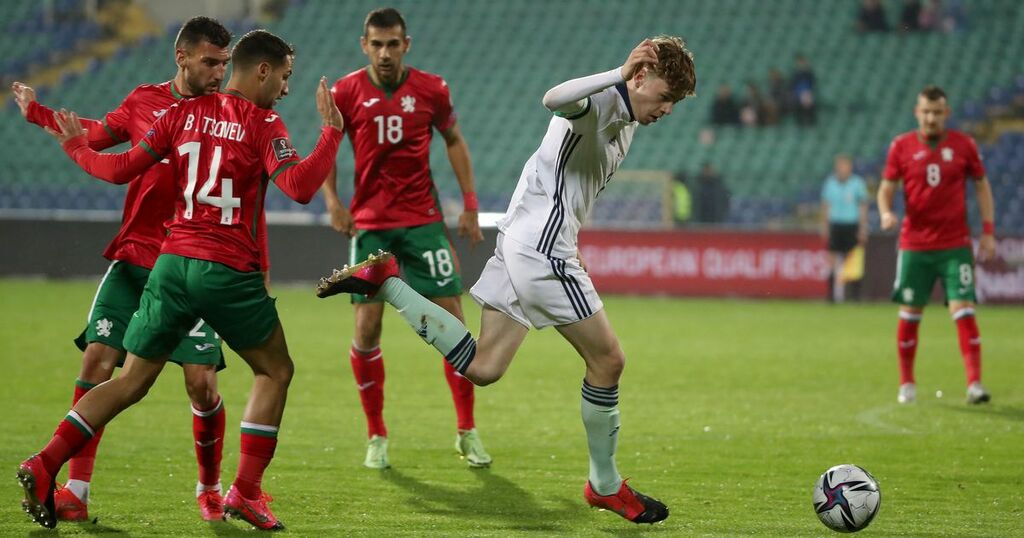 Liverpool teenager Conor Bradley hopes he has earned himself further game time and played himself into Ian Baraclough’s plans for next month’s high-profile game with Italy in Belfast.

Northern Ireland’s World Cup dream may be over after Tuesday night's depressing 2-1 defeat in Bulgaria ruled them out of contention for a potential play-off for Qatar.

But one of the positives of a dreary night in Sofia was Anfield youngster Bradley who made his first international start winning his fifth cap.

And the 18-year-old hopes his breakthrough moment in Bulgaria is the start of things to come for him in a green shirt.

Northern Ireland conclude their Group C campaign at home to Lithuania and Euro 2020 champions Italy on November 12 and 15.

“Hopefully that’s the first of many,” said Bradley, who played almost 70 minutes at right wing back before being replaced by Jordan Jones as Northern Ireland chased a late response.

“I was just buzzing when Ian told me I was starting and I’m thankful to him for giving me the opportunity. It was unreal.

“It was an unbelievable feeling and I just need to keep trying to impress Ian and the other coaching staff now.

“I want to try to keep getting picked for the squads and get more starts under my belt.

“We have another (international) break coming up next month, so I’ll go back to Liverpool, work hard there and hopefully be away with the first team again in a few weeks.”

Bradley, who made his Northern Ireland debut as a late substitute in a 3-0 friendly win over Malta in May, won all his previous four caps from the bench.

He made a favourable impression when he came on in last month’s 0-0 draw with Switzerland at Windsor Park, rattling Torino defender Ricardo Rodriguez with a crunching tackle in front of the North Stand.

But Tuesday night’s vibrant display provided a more panoramic view of his all-round qualities; his pace, crossing ability and fearless attitude to play on the front foot.

“It was good to show the fans the other stuff I can do by starting.

“Obviously, we’re gutted with the result against Bulgaria. We feel as if we should have come away with at least a point, if not all three and we should have taken our chances.

“We had enough chances to win the game, but we didn’t take them.”

Boss Baraclough, who has blooded a number of younger players in his 15 months at the helm of the national team, said: “Conor can be proud of starting and he has dealt with it.

“Like everything that has been put in front of him, he has gone and dealt with it with a maturity beyond his years.

We are pleased with how he is developing.”