By Andy Hunter at Anfield 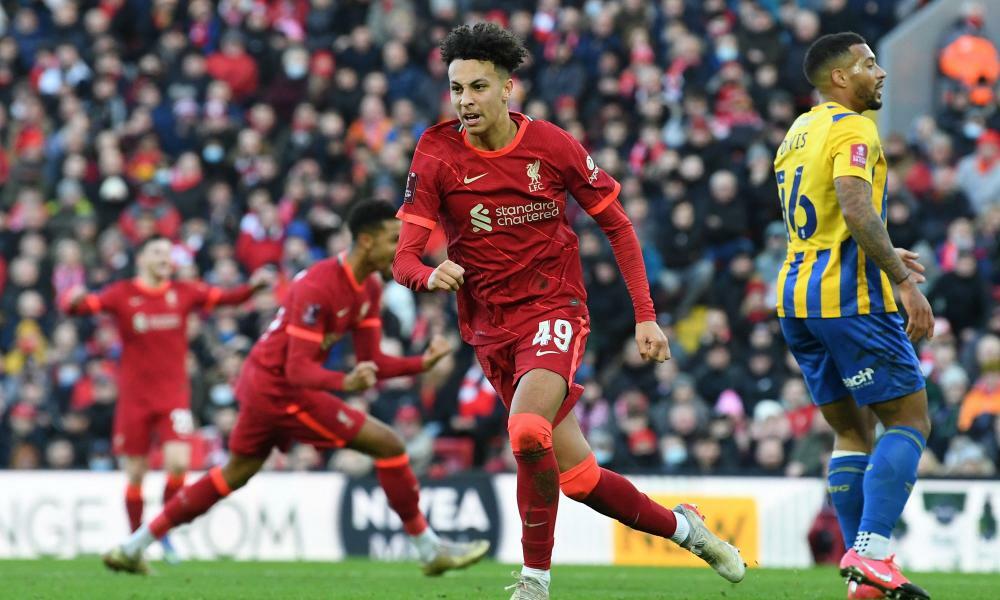 Shrewsbury Town had their moment, a precious lead at Anfield that lasted all of seven minutes, but an inexperienced Liverpool found a mature response. Jürgen Klopp’s team ruined any fleeting hopes Steve Cotterill had of an upset as young Kaide Gordon, and the not-so-young Brazilian duo of Fabinho and Roberto Firmino, eased the Premier League hosts into round four, where they will host Cardiff.

“I don’t think it was a 4-1 game, more of a 2-1,” the Shrewsbury manager said. “I am very proud of our lads and very thankful for how Liverpool and Jürgen Klopp have been with us all day. Virgil van Dijk brought his shirt into our dressing room after the game, congratulated our players and shook hands with every one of them. He is top drawer and an absolute gentleman.

“We would have liked to have had more of a go at them but it was very difficult to get the ball off that triangle of [Ibrahima] Konaté, Van Dijk and Fabinho. We had them worried for six or seven minutes but that was it.”

A testing week ended with another complicated assignment for Liverpool, although it was one they ultimately navigated comfortably.

Klopp was free to lead the team again having been in isolation with Covid since before the draw at Chelsea. The Liverpool manager rejoined the group at their hotel on the morning of the game and with positive tests continuing to affect the squad, along with injuries and the Africa Cup of Nations, he was required to improvise with his team selection. Four teenagers – the full debutant Max Woltman, Gordon, Conor Bradley and Tyler Morton – started in a side that included the experience of Van Dijk, Andy Robertson and Fabinho. That insurance policy was seriously examined in the first half by Shrewsbury’s disciplined and supremely well-organised game plan.

The Liverpool manager admitted: “It’s been very difficult for different reasons. This was the team we could line-up today and the boys did really well. They had to put in a proper shift. We had a proper outbreak last week and it showed up that we had a lot of false positives but the rules are there and some players couldn’t play today. The only extra positive was Trent Alexander-Arnold. All the rest were false positives but we had to close down the training ground until you have two extra testing rounds.”

Liverpool dominated possession against the League One side but struggled initially to break through a five-man visiting rearguard protected by a compact three-man midfield. Gordon forced Shrewsbury’s goalkeeper, Marko Marosi, into a low save from the edge of the area and Van Dijk headed over from a Robertson free-kick. Otherwise it was a laboured opening until the visitors stunned Anfield by scoring from their first attempt on Caoimhin Kelleher’s goal.

Nathanael Ogbeta, Shrewsbury’s left wing-back, served notice of the threat he posed a minute before the breakthrough when skirting round Bradley and sweeping an inviting cross through the Liverpool area. No teammate was on hand to capitalise. Seconds later, having controlled a crossfield ball from Ethan Ebanks-Landell expertly on his chest, Ogbeta again attacked Bradley before curling another delightful cross behind Konaté. This time Daniel Udoh was alert to the wing-back’s intentions and, arriving unmarked in the six-yard box, steered the ball beyond Kelleher to the wild delight of a 6,000-strong away crowd.

Klopp looked stunned at the ease with which Shrewsbury sliced through his team. Liverpool responded sharply, however, and quickly drew level with a goal made in their academy. Morton and Elijah Dixon-Bonner combined to release Bradley in space on the right. The Northern Ireland international picked out Gordon inside a crowded penalty area and the gifted forward’s quick feet enabled him to open up space for a cool finish beyond Marosi. At 17 years and 96 days Gordon overtook Michael Owen to become the second youngest goalscorer in Liverpool’s history behind Ben Woodburn.

The hosts overturned the deficit to lead at half-time through a Fabinho penalty. Given how well their team had defended for 44 minutes, it was a galling way for Shrewsbury to concede. Ebanks-Landell had Van Dijk on his back as the pair challenged for Robertson’s free-kick inside the area but no convincing reason to meet the ball with a raised arm. David Coote immediately pointed to the spot and Fabinho sent Marosi the wrong way from it. Shrewsbury maintained their shape and strategy throughout the second half but a lack of composure in front of goal cost them several opportunities to capitalise on the counterattack.

The clearest threat arrived consistently from Liverpool. Marosi denied Dixon-Bonner at close range moments after the restart but was beaten for a third time by a cheeky finish from the substitute Firmino. Bradley claimed his second assist of the match when he hooked the ball back from the byline for Konaté. The defender’s attempted shot was deflected on to Firmino via a Shrewsbury boot and, facing away from goal, the Brazilian backheeled past the exposed Shrewsbury keeper.

Fabinho claimed his second of the game, and Liverpool’s fourth, with an emphatic finish into the roof of the net from Kostas Tsimikas’s injury‑time free-kick.