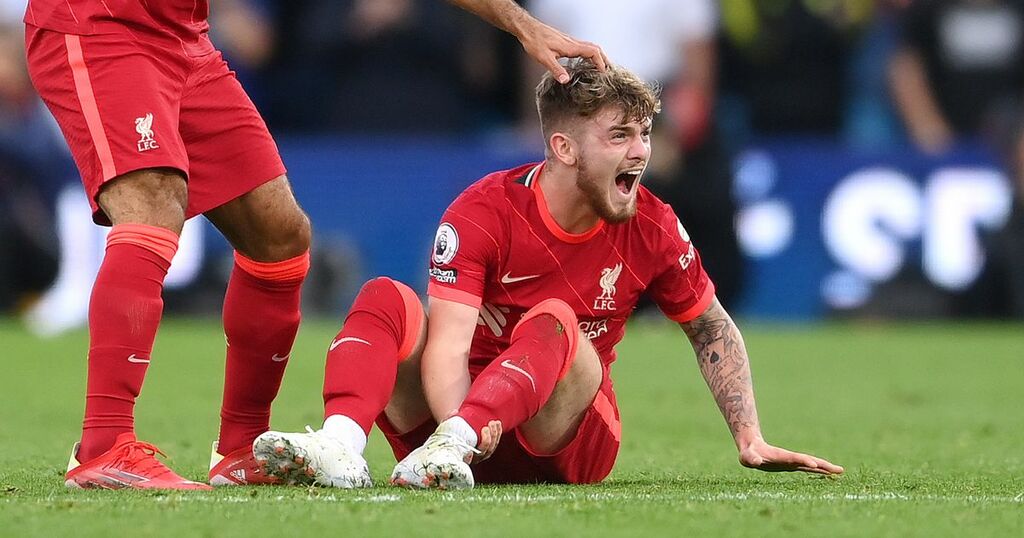 Liverpool Harvey Elliott brightened the spirits of a young fan by gifting him some match-worn items on Sunday in hospital.

The 18-year-old was stretchered off of the pitch after suffering a horrible injury on his ankle during the Reds’ 3-0 victory over Leeds United.

In the second half, Elliott was breaking down the wing on a counter-attack before being chopped down by Pascal Struijk, who was shown a red card for the challenge.

It was clear that Elliott had picked up a horrific-looking injury as he hit the ground and the medical team were quick to run on the pitch and provide treatment.

The English forward was then taken to hospital in an ambulance and is set to undergo surgery on a dislocated ankle, potentially as soon as Tuesday, The Athletic have reported.

Yet despite being in an obvious state of shock and distress, Elliott still found time to give his shirt from the match and his boot to a young fan who was also in his hospital bay.

In a WhatsApp screenshot posted on Twitter, the Dad of the young boy messaged a friend saying: “My son has just broke his arm at a footy game this afternoon. Who comes in on next bed to him… Harvey Elliott and his family.

“Gives him his LFC top from the game and his shoe. Son’s buzzing now.”

Elliott was impressive in his new-found role as an attacking midfielder in the Liverpool midfield, joining in on attacks and causing Marcelo Bielsa’s defence plenty of problems.

The young prospect reassured fans on his way to A&E that he was in positive spirits by posting an Instagram story of himself with the caption: "Thank you for your messages guys! Road to recovery. YNWA”

Mohamed Salah opened the scoring in simple fashion in the 20th minute when he tapped in a Trent Alexander-Arnold cross from close range, in what was his 100th goal in the Premier League.

Who would you like to see replace Harvey Elliott in the Liverpool midfield? Have your say in the comments section below.

Then unlikely goalscorer Fabinho made it 2-0 in the 50th minute, his fourth ever league goal for the club, bundling home a corner after a few rebounded shots meant the ball fell into his path.

Sadio Mane rounded off the performance late on by getting himself on the scoresheet in the second minute of added time as he turned and fired past Illan Meslier following some intelligent build-up play from Thiago.

Mane could have scored at least a hat-trick in the game overall as he had 10 shots during the course of 90 minutes, missing some very clear-cut opportunities.

Elliott will be a big miss for the next few months when he is sidelined as he appears to have been highlighted by manager Jurgen Klopp as the replacement for Georginio Wijnaldum, who left for Paris Saint-Germain over the summer.

Many Liverpool fans were expecting a replacement for the Dutch international to be signed but Klopp repeatedly said that he didn't have a sufficient budget to bring any big-money players to Anfield, which could have been fuelled by the faith he had in Elliott.

The German boss will be relying on Alex Oxlade-Chamberlain, Thiago, Naby Keita and Curtis Jones to replace Elliott whilst he recovers from his surgery.