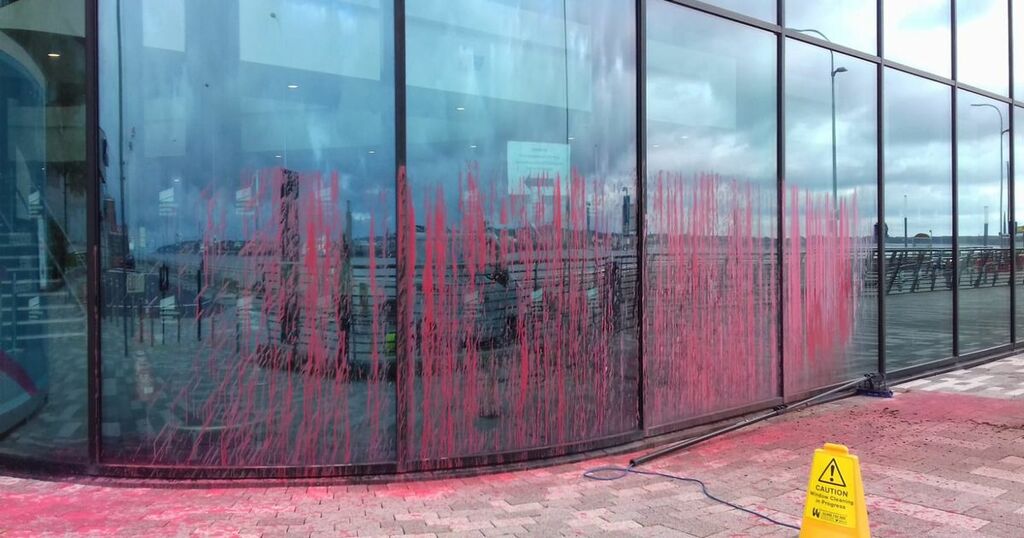 Liverpool's ACC building was vandalised by protestors who threw 'blood red' paint over its windows.

The event is scheduled to be held there next month.

The incident took place on the same morning that hundreds marched through the city in a protest led by Jeremy Corbyn against the Liverpool 'arms fair'.

London-based activists also sprayed the ExCel centre with 'blood-red paint' this morning (Monday, September 13) ahead of an 'arms fair' there, saying it was 'to remind those attending of the bloodshed caused by the products marketed inside'.

In June, the group occupied the roof of the Héroux Devtek landing gear factory in Runcorn, spraying the walls with red paint. They claim the company provided parts to Israeli drone manufacturer Elbit Systems, whose unmanned vehicles it claimed are used for surveillance and military action in Palestinian territory.

In a statement, the campaign group said: "At 7.00am [on Saturday, September 11], Palestine Action activists took direct action to disrupt the 2021 AOC Liverpool Arms Fair, due to be held at the council-owned ACC arena in October.

"Activists have used fire extinguishers to cover the outside of the building in blood-red paint, to signify that the companies appearing inside are responsible for manufacture of some of the most cruel and destructive electronic warfare products ever produced.

"The hugely unpopular event is going ahead with council support, despite protests mounting against its presence.

"Direct action taken by Palestine Action activists comes alongside a demonstration against the arms fair [held on Saturday, September 11] by residents, trade unions, councillors and more, calling for the event’s cancellation.

"Attempts so far to stop the arms fair have failed, and Palestine Action have pledged to take direct action to shut it down if it is not cancelled.

"These events – such as the Liverpool Arms Fair and DSEI London – serve two purposes.

"Firstly, they provide a safe meeting space where firms such as Raytheon, Elbit Systems, ELTA, L3 Harris and more can share their ideas with the MOD and other Western militaries.

"Secondly, they serve to validate and normalise these firms’ operations, with the British government keen to ensure that global arms firms involved in the facilitation of war crimes feel safe to bring their operations (and their millions) to British soil.

"These functions are both opposed by Palestine Action and by British citizens, and as such action must be taken to prevent their normalisation and to undermine the presence of the war-crimes-industry."

Mayor of Liverpool Joanne Anderson said she and Liverpool City Council are powerless to stop the AOC Europe event as the ACC trades independently, despite being set up as a wholly owned subsidiary of the council.

The mayor said she is 'appalled' that the controversial arms fair is taking place in the city. She passed a motion at council to condemn the electronic warfare exhibition.

"I am appalled that this event is being held in Liverpool – in one of our buildings.

"Many of you have been in touch with me to outline, in no uncertain terms, your views.

"I am a pacifist and I have been consistently clear that I am in absolute agreement with you."

"However, the inescapable fact is that it is lawful and we have no public powers to stop it. In the same way, we are powerless to stop other people who are not welcome in our city like the far right, from being in our city, unless they break the law.

"I have sought extensive soundings from our legal team, but based on their expert advice, regrettably there is nothing that I as Mayor, or the council, can do to prevent this event from taking place.

"The bottom line is that the council has no power to interfere with bookings taken by ACC Liverpool, and has no member representatives on its board.

"What I won’t do, is subject our council to legal challenge at a time when our resources are so limited."

Some companies exhibiting at the AOC Europe event have been criticised by human rights groups like Amnesty International of selling equipment to militaries and security forces of countries accused of serious human rights abuse.

Those companies say their actions are legal. French defence company Thales, an exhibitor at the conference, said it has no control over how its equipment is used.

A spokesperson for AOC Europe told the ECHO : "Throughout its 25-year history, AOC Europe has connected organisations and individuals from Government, defence, industry and academia to promote the exchange of information and review the latest advances in electromagnetic and information-related fields.

"The event will explore aspects and display equipment related to the information security and communications domain such as Cyber Electromagnetic Activities (CEMA), Information Operations (IO), and other information-related capabilities.

"AOC Europe provides an opportunity for attendees to exchange ideas, develop relationships, and showcase a range of high tech electronics – a field in which the UK is an acknowledged world leader.

"AOC Europe serves only the legitimate defence and security industry, which is the most highly and tightly regulated in the world.

"We work in close partnership with the UK Government, and all visitors to our events are vetted and undergo the strictest scrutiny before being allowed access.

"Exhibitors are contractually required to ensure that equipment, services, promotional material, documentation and anything else on display and online complies with domestic and international law.

"If any companies are found to be exhibiting anything that contravenes this policy, then robust and appropriate action is taken."

A spokesperson for the force told the ECHO: "We are investigating a report of criminal damage at the Exhibition Centre Liverpool in Liverpool city centre in the early hours of Saturday (11 September).

"It was reported two males on bicycles or e-scooters used fire extinguishers to spray red paint on ground level windows at the exhibition centre. It is believed the incident had happened at about 3.30am, and the paint has since been cleaned off.

"The offenders were dressed in black and carried large backpacks.

"Two fire extinguishers have been recovered from the scene and taken for forensic examination.

" Merseyside Police is aware of footage posted online appearing to show the incident, and enquiries to identify the offenders are ongoing.

"Anyone with information is asked to DM @MerPolCC on Twitter or Merseyside Police Contact Centre on Facebook. Alternatively, call officers via the police non-emergency number 101 quoting reference 21000632648 or Crimestoppers, anonymously, on 0800 555 111."