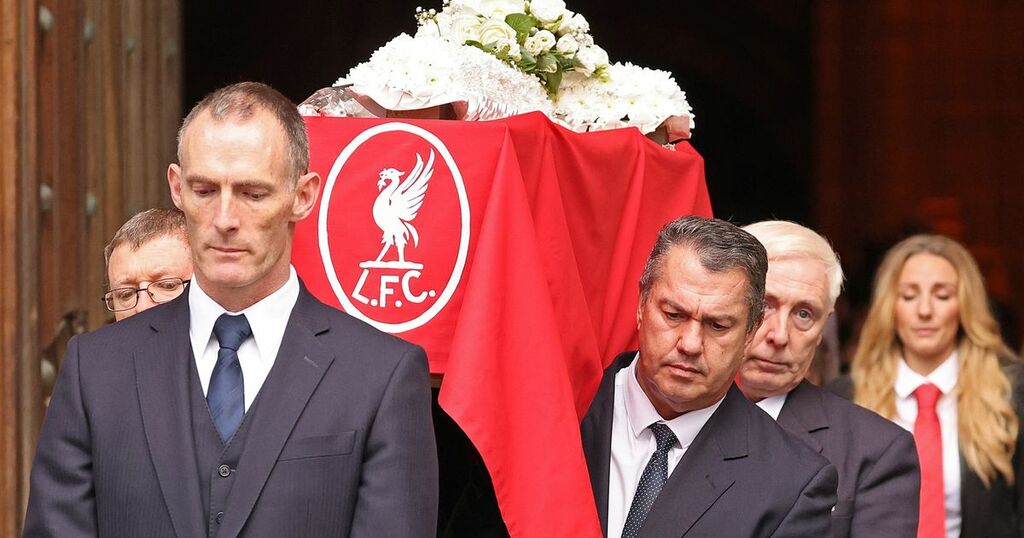 A host of Liverpool legends along with hundreds of fans at both Anfield and the city’s Anglican Cathedral were in attendance to pay their respects at the funeral of Roger Hunt.

Hunt, who scored a record 244 league goals for the Reds and was a member of England’s 1966 World Cup winning side, passed away at home peacefully last month at the age of 83.

His wife Rowan, children David and Julie, stepchildren Katie and Wayne and extended family were joined at Liverpool Cathedral by around 400 mourners.

Before the service, the funeral cortege passed Liverpool’s Anfield ground where hundreds more supporters had gathered to pay their respects.

READ MORE: 'I never needed a knighthood, I was knighted by the Kop' - Roger Hunt set the bar for Ian Rush and Liverpool dynasties that followed

‘Sir Roger’, as he was affectionately labelled by the Kop, became one of the cornerstones of Bill Shankly’s first great Liverpool side of the 1960s having arrived at Anfield from Stockton Heath (later known as Warrington Town) in the Mid-Cheshire League following the completion of his national service just months before the iconic Scottish manager in 1959.

Forming a lethal strike partnership with Scottish forward Ian St John, who also sadly passed away earlier this year, Hunt’s goals helped propel Liverpool out of the doldrums of the Second Division where they had been marooned for eight years.

His marksmanship along with his selfless teamplay were critical in helping Shankly’s side win the First Division championship in 1964 and 1966, while in 1965 he scored the vital opening goal early in extra time against Leeds United at Wembley as Liverpool finally won the FA Cup for the first time after 73 years of trying.

That same year, he could have been part of the first British side to ever win the European Cup as his goal helped the Reds to a European Cup semi-final first leg win over Inter Milan only for a string of contentious refereeing decisions in the return match in Italy to prove decisive but his international class was proven in 1966 when he played every match of England’s World Cup triumph, scoring three important goals en route to the final for which he later received an MBE.

After Reverend Bygroves began the service by reading out a message from Hunt’s 1966 England World Cup strike partner Sir Geoff Hurst, team-mate Ian Callaghan - Liverpool’s all time record appearance holder with 857 matches - began the tributes by saying: “It’s a great honour to talk about Roger, my team-mate for Liverpool and for England.

“The tributes we have seen since his passing underlines the admiration he was held in by the football world and the general public.

“From the moment I met Roger to the last time I saw him we never had a cross word and it’s been a pleasure and a privilege to call him a colleague and a friend.

“Roger scored his debut in 1959 and went on to set a club record for league goals which still stands to this day.

“We both had the experience of being England team-mates in the 1966 World Cup with Roger scoring three goals en route to the final, which I watched with Nobby Stiles’ false teeth in my pocket.

“Everything said since Roger’s passing is no surprise to me or anyone lucky enough to know him. I never heard anyone say a bad word about Roger apart from one or two opposing defenders when he'd put the ball in the back of the net again.

A tribute from former Liverpool striker and England manager Kevin Keegan followed and he urged the club to erect a permanent tribute in honour of Hunt’s legendary achievements.

“When you talk about the history of Liverpool Football Club and the greats who have played at Anfield over the generations, Roger Hunt’s contribution stands proudly alongside any of them”, Keegan said.

“To take over from Billy Liddell takes some doing. Twenty players left when Shankly arrived at Liverpool but not Roger because he knew this was someone to build a team around.

“The fact a crowd of 55,214 turned up at Anfield for his testimonial - with another 10,000 locked outside - says everything about how he was regarded, there were a lot ‘kids’ with beards in the Boys Pen that night!

“Liverpool was founded in 1892 and in that time only 19 players have scored over 100 league goals for the club. All those names, Liddell, St John, Toshack, Dalglish, Rushy going right through to Mo Salah now but Roger Hunt stands above them all when it comes to league goals.

“He was a World Cup winner in 1966. He was Liverpool's top scorer for eight years. He scored the first goal on Match of the Day. He scored five hat-tricks in a season. I could go on and on.

“Sir Roger went under the radar a bit because of the person he was, that was his character. But why isn’t there a statute of him at the Kop end where he scored those 244 league goals with that number on to inspire the next generation of kids? I think he would love to see one of them go past him one day.”

Liverpool-born comedian and entertainer Jimmy Tarbuck also addressed the service and said simply: “Roger Hunt was a man who inspired positive qualities in everyone he met - loyalty, trust, good humour and a zest for life.

“To be born a gentleman is an accident, to die as one is an achievement.

"Thanks for all the pleasure I got from watching you, it was just a joy. God bless Sir Roger Hunt.”

After the hymns How Great Thou Art and Abide With Me, another of Hunt’s 1960s Liverpool team-mates, Gordon Milne also paid tribute before delivering a reading from the Gospel of St John.

He said: “When Rowan asked me to say a few words, I searched for what I could say about Roger - a friend, a team-mate, and I very quickly came to the conclusion that this was a man who wanted no fuss and whose achievements did his talking for him.

“Action not words, facts not fiction was his way, the record books speak clearly on his behalf.

*Order a copy of Friday's ECHO with a special tribute to Sir Roger Hunt.

"At Anfield on 3rd October [when tributes were paid at Liverpool’s first home game since his passing], Liverpool supporters sent a message to the world from their hearts how much they respected and truly loved Roger and that message quite clearly demonstrated that they will never allow Roger and what he stood for to ever be forgotten.”

Closing prayers were led by Phil Mason, club chaplain from Bolton Wanderers - Hunt’s boyhood club who he played for after his time at Liverpool and where he continued to watch football humbly with his flask amongst the fans - before close family and friends left for a private service at Anfield Crematorium to the strains of You’ll Never Walk Alone.

Hunt’s coffin was draped in a red flag in the style of the iconic blood red 1960s Liverpool shirt made by Reds fan Peter Carney, the man behind many of the most famous banners seen at Anfield over recent decades, and who provided similar flags for the funerals of legends Tommy Lawrence, Peter Thompson and Tommy Smith.

“Roger Hunt was one of my heroes”, he told the ECHO.

“He was an inside forward - not a centre forward - and the best way I can describe him for the modern generation is he was like a polite Luis Suarez.

“He had all of Suarez’s ability but without the animal instinct, he was crafty and he was nippy, and even if he didn’t like heading the ball as was mentioned in the service he scored more headed goals than people realised!

“He was just a great player and he was a gentleman as well, everyone who he ever met him only had glowing things to say about him and it was nice to hear during the service as well as that he was always one of the last to finish signing autographs for people.

“That’s something that maybe these modern-day players should think about and learn from, that it’s an honour to wear the shirt and play for the people as Bill Shankly always said.

“I managed to get Roger’s autograph once from a friend he played golf with and I treasure it, it’s still in my golf bag.

“It’s a huge honour to have made the flag for him today. This started when Tommy Lawrence died a few years ago and I did it off my own bat, offered it to the club who put it to the family and they were delighted with it.

“Since then, I’ve done a couple more, with the help of Spirit of Shankly, when members of Shankly’s Liverpool team have passed away and it’s just a privilege to be able to pay tribute in this way.

“To think that Sir Roger leaves this world with my flag wrapped around him is very special and means the world to me.”