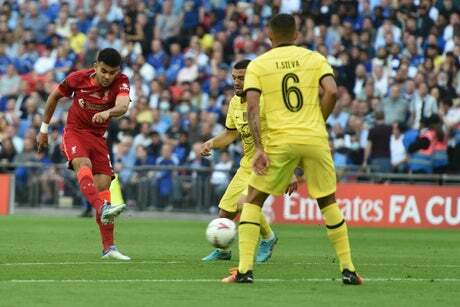 Luis Diaz must wonder what all the fuss is about. Rock up at Liverpool halfway through the season, casually become one of the most outstanding players of an already glittering squad and then prove their best outfield player in two successful cup finals.

This is no ordinary start to an Anfield career. But then Diaz is no ordinary player, his pace, direct running, close control and willingness to shoot causing Chelsea defenders nightmares down the left flank throughout this absorbing FA Cup final.

A performance missing only a goal – the nearest he came was when striking the outside of the post second half – it was also timely given the travails on the other flank of the man who, for so long, has been king.

Liverpool didn’t need the pre-match presence of the celebrated DJ spinning the decks to know matters were going at bit Pete Tong when Jurgen Klopp wrapped a comforting arm around Mohamed Salah after the Egyptian hobbled off with a groin problem after barely half-an-hour.

The scenes were eerily reminiscent to four years earlier when, at around the same time of the match, the forward was being consoled by his manager after being forced out of the Champions League final against Real Madrid following his tangle with Sergio Ramos.

This time it appears simple wear and tear after an insanely intense season. The upshot is Salah now faces a battle to be fully fit for his Real revenge mission. For Diaz, though, Paris is a chance to complete an astonishing hat-trick.

After the one glaring omission from his roll of honour was addressed in dramatic fashion, there was only one thing left for the Liverpool captain to do.

Sure enough, as he clasped his hands around the FA Cup, then came the Henderson shuffle before he thrust the trophy into the Wembley air amid further celebrations.

Henderson is now the first Reds skipper to lift the championship, the FA Cup, the League Cup and the European Cup. Oh, and you can throw in the UEFA Super Cup and FIFA Club World Cup too.

As the sole survivor of the FA Cup final defeat to Chelsea a decade ago, this latest triumph will have particular resonance for the midfielder, who proved an impressive deputy for the hamstring Fabinho in the number six role.

Henderson, along with the solid Thiago Alcantara and Naby Keita, were integral to Liverpool wresting the initiative first half. And James Milner, on for Keita midway through the second half, showed similar resolve in an engine room that for the most part dominated a Chelsea midfield for whom not even the introduction of N’Golo Kante could truly change the pattern.

Now Henderson will hope there’s a chance for a couple of more shuffles in the next few weeks. Completed, yes, but not finished. Not by a long chalk.

There were many individual battles to savour as these titans clashed but the most intriguing concerned two players who, on the pitch at least, we rarely in direct opposition.

The debate over whether Trent Alexander-Arnold or Reece James represents England’s best right-back option will intensify the nearer the World Cup approaches later this year.

But England boss Gareth Southgate and assistant Steve Holland, watching on from the Wembley stands, were here given compelling evidence that Alexander-Arnold is, once again, at the peak of his powers.

James wasn’t poor. Far from it, in fact, even though he was often left having to deal with the tricky Diaz. Alexander-Arnold, however, excelled, dictating play with his range of passing, an ability to switch the focus of the attack – usually in the direction of Diaz – regularly putting Liverpool on the offensive.

Marcos Alonso caused some problems immediately after the break, but even when Alexander-Arnold played Liverpool into trouble with some ambitious passing, he was ultimately able to rescue the situation with covering challenges.

Now Alexander-Arnold, at 23, has become the youngest player to complete a clean sweep of six major honours. Frightening, then, to consider he’s only going to get better.