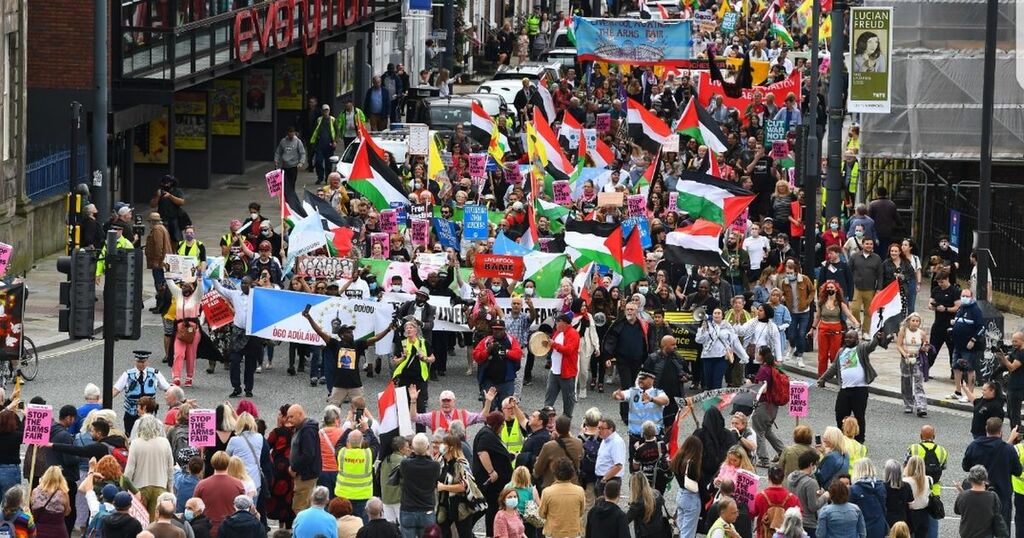 Members of Liverpool 8's Yemeni and Palestinian communities were among those to join a protest against an "electronic warfare" event set to be held in Liverpool next month.

Liverpool 8 councillors and community members joined protesters at the Princes Park gates for the start of the protest on Saturday.

The protesters marched to the Metropolitan Cathedral, then onto St George's Hall, to protest against the planned AOC Europe annual Electronic Warfare Europe convention, due to be held at the Exhibition Centre between October 11 and October 13.

Kim Johnson, who represents the Riverside constituency, and Liverpool 8 ward councillors for areas including Princes Park, Greenbank and Riverside, were out in protest. Constituents, as well as supporters from Manchester, Birmingham and many communities from across the city region gathered too, to march on to St George's Hall.

Princes Park gates have seen many protests over the years begin there and before the march set off, there were a few speeches from people opposed to the event.

Actor and playwright, Tayo Aluko sang a modified version of the classic song Down by the Riverside.

There were passionate speeches from Liverpool’s Yemeni and Palestinian communities among others, all voicing their unified opposition to the fair.

The Arms Fair is organised by the Association of Old Crows (AOC) which is an organisation for individuals who have common interests in Electronic Warfare (EW), Electromagnetic Spectrum Management Operations, Cyber Electromagnetic Activities (CEMA), Information Operations (IO), and other information-related capabilities.

Max Steinberg, Chair of the ACC Liverpool group, has previously outlined the group's position, writing: "AOC aims to connect organisations and individuals from government, defence, industry and academia to share information, ideas and technological advances to allow the development of sophisticated systems used to make the world a safer place.

"Speakers at the conference will include leading academics and world-class scientists and engineers.

"These events are not transactional, all exhibitors must adhere to the highest regulatory standards and any business conducted or discussed is subject to UK export laws. Attendees and exhibitors are assessed on a case by case basis; all applications are vetted and undergo the highest scrutiny to ensure strict compliance with all applicable rules, regulations, international treaties and laws".

Many at the rally made reference to the global impact the arms trade has on people who live in and around Liverpool 8, who have been affected by warfare.

Riverside MP Kim Johnson said: “I’m opposed to this arms fest. I see the suffering that the arms trade has on brothers and sisters in the likes of Yemen, on a daily basis.

"We have a big Yemeni community in this city and I’ve spoken on numerous occasions about the impact the arms trade has on this community.

"It’s a major humanitarian crisis. This government doesn’t care, it’s more interested in making billions from the trade, than the rights of people”.

The day before the planned protest, Bristol electronic band Massive Attack tweeted that they were cancelling an upcoming concert at the Arena in protest.

Princes Park ward councillor Tom Logan said: “The size of the demo today shows that the people of Liverpool do not want the arms fair to happen. We don’t want death and destruction on our doorstep."

Riverside ward councillor Steve Munby said: "It’s a slap in the face for those citizens who’ve fled warfare – Somalis, Yemenis, Syrian Kurds, Afghans. As a city we are not invested in the economy of warfare. Our people care about the Foundational Economy – the people we’ve come to rely on in the last 18 months; care workers, nurses to lorry drivers and bin crews. This event does not reflect our values."

Former Labour leader Jeremy Corbyn was one of many who spoke to the protesters in support of stopping the planned arms fair. Princes Parks ward councillor Anna Rothery was also in attendance.

Lucille Harvey, ward councillor for Princes Park, who was also in attendance, said: "I'm here today with councillors for peace to show our opposition to the Arms Fair. Mayor Joanne (Anderson) has done all she can to stop it going ahead, but the decision lies with the ACC's directors.

"After seeing the strong opposition from across the city, I hope the ACC do the right thing and cancel the fair".

Ward councillor for Greenbank, Laura Robertson–Collins said: “We are here today because we oppose the arms fair being in our city. We did manage to get rid of the gun show a couple of years ago, so I do hope we can do the same again.”

Riverside ward councillor and cabinet member for housing and development, Sarah Doyle said: “This is not the type of event that we want in our city. We want events in our city that reflect the values of people and residents. Those values are peace and solidarity of everyone doing well together."

Dad of two arranged to meet girl at McDonald's for sex