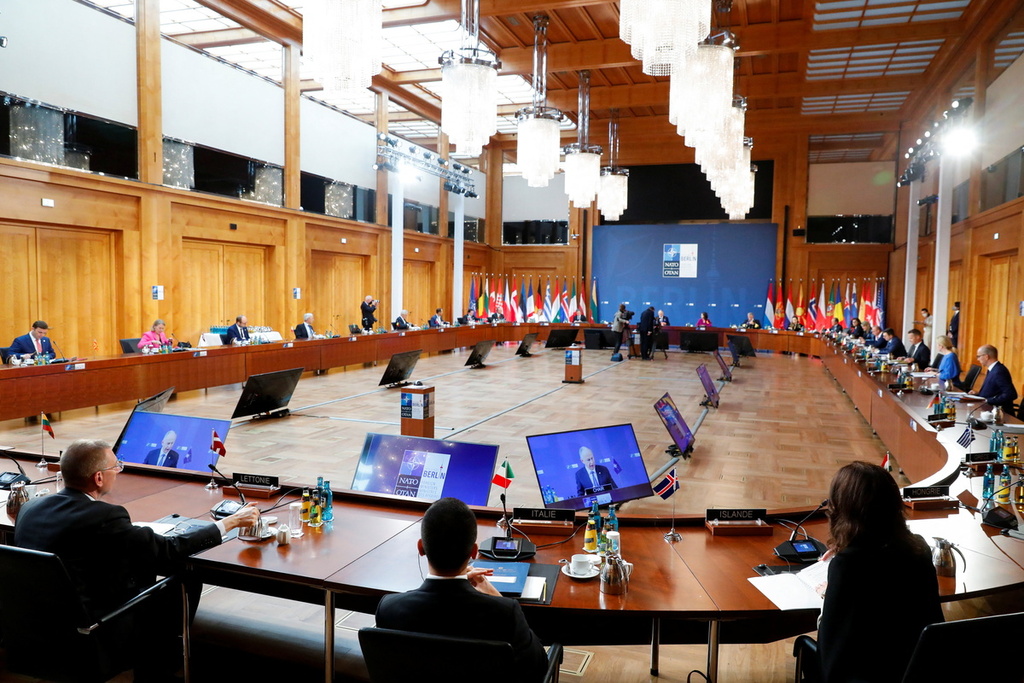 NATO deputy chief 'confident' of finding consensus on Finland, Sweden membership
NATO is confident that it can overcome objections by Turkey and quickly admit Finland and Sweden, its deputy chief said…

WEKU
Get all your news in one place
Latest Politics news:

Russia's blockade could cause mass famine beyond Ukraine – but it’s a crime without a name
Trying to gauge the worst aspect of the Russian invasion of Ukraine is difficult. For some, it will be the…

The Conversation
Read news from The Economist, FT, Bloomberg and more, with one subscription
Learn More
Labor backs an extended run for Industry Growth Centres

The New Daily
Australians face their starkest choice at the ballot box in 50 years. Here's why

The Conversation
Madonna King: We deserve more from our leaders than a tussle between two brands of timid

Whichever of our leaders takes the Treasury benches tomorrow night, they need to wake up on Sunday morning and abandon…

The New Daily
From analysis to good news, read the world’s best news in one place
Election a chance to reset discovery research funding: Science groups

If politics is about change, then Newcastle must be a political town, with the reworking of the city's face and…

US Secretary of State Antony Blinken voiced confidence on Sunday that Sweden and Finland would join NATO once they formally apply despite Turkey's voiced concerns. Earlier, NATO Secretary-General Jens Stoltenberg said he was confident of finding common ground and consensus on how to move on membership issues. Read our live blog to see how all the day's events unfolded.

This live page is no longer being updated. For more of our coverage of the war in Ukraine, click here.

Ukraine's gas transit system operator said over the weekend that it had resumed operations at two distribution stations in the Kharkiv region and restarted gas supply to more than 3,000 consumers.

Ukraine has scored a series of successes since Russia invaded on Feb. 24, forcing Moscow's commanders to abandon an advance on the capital Kyiv before making rapid gains to drive them from Kharkiv, Ukraine's second-biggest city.

"Both stations were shut down due to damage to the main gas pipeline in the Kharkiv region as a result of hostilities," the operator said in a statement, adding that the damages have now been repaired.

Some 54 gas distribution stations in seven regions of Ukraine remain shut down, the operator added.

NATO on Sunday pledged open-ended military support for Ukraine, as Finland hailed its "historic" bid to join the alliance and Sweden's ruling party said it backed a joint membership application. The promise came after Finland jettisoned decades of military non-alignment, redrawing the balance of power in Europe and angering the Kremlin.

On the ground in Ukraine, Russia announced air strikes in the east and in Lviv in the west as Western intelligence predicted its campaign in eastern Ukraine would stall amid heavy losses and fierce resistance.

At a meeting of NATO foreign ministers in Berlin, Germany's Annalena Baerbock said it would provide military assistance "for as long as Ukraine needs this support for the self-defence of its country"

Sweden's ruling Social Democrats said on Sunday they backed the country joining NATO, abandoning decades of opposition in the wake of Russia's invasion of Ukraine and creating a large parliament majority in favour of membership.

With neighboring Finland already set to hand in its application, Prime Minister Magdalena Andersson is now all but certain to launch a formal application within days.

US Secretary of State Antony Blinken said he had spoken to his Turkish counterpart on Ankara's concerns regarding Sweden and Finland's entry into NATO and that after Sunday's meeting of foreign ministers he was confident a consensus could be reached.

"I don't want to characterise the specific conversation that we had either with the foreign minister or within the NATO sessions themselves, but I can say this much: I heard almost across the board, very strong support (for Sweden, Finland) joining the alliance," he told reporters after a NATO foreign ministers meeting in Berlin.

"Turkey made it clear that its intention is not to block membership," Stoltenberg told reporters virtually after alliance foreign ministers met in Berlin. He said he was in touch with Turkish Foreign Minister Mevlut Cavusoglu after Ankara alleged that the Nordic nations were home to "terrorists', a reference to Kurdish separatists.

"A precedent has been set. The first psychological barrier (on handing weapons to Ukraine) has been overcome," Kuleba said in a video on Facebook while on a visit to Berlin. After previously limiting deliveries to defensive weapons, Berlin is ramping up shipments of heavy arms to Ukraine, sending German self-propelled howitzers to Kyiv.

2:47pm: Turkey lays out demands for Finland and Sweden

Turkey's foreign minister said on Sunday that Sweden and Finland must stop supporting terrorists in their countries, provide clear security guarantees and lift export bans on Turkey as they seek membership in NATO.

Mevlut Cavusoglu, speaking with Turkish reporters after a meeting of NATO foreign ministers in Berlin, said Turkey was not threatening anybody or seeking leverage but speaking out especially about Sweden's support for the PKK Kurdish militant group. Ankara views the PKK as a terrorist organisation.

At the Santahamina military base near Helsinki, the training programme for Finnish army reservists has taken on a new sense of urgency following the Russian invasion of Ukraine. Finland on Sunday made a dramatic shift from its post-war neutrality policy by formally announcing its bid to apply for NATO membership. But not all Finnish citizens support the move.

At a G7 foreign ministers meeting in the northern German town of Weissenhaus, German Foreign Minister Annalena Baerbock warned that the Russian invasion of Ukraine was stoking a global food crisis. Here’s a closer look at how supply and transportation chokes due to the war can affect food prices and hit particularly vulnerable countries such as Afghanistan, Ethiopia and many sub-Saharan African nations.

Finland's president and government announced Sunday that the Nordic country intends apply for membership in NATO, paving the way for the 30-member Western military alliance to expand amid Russia’s war in Ukraine.

President Sauli Niinisto and Prime Minister Sanna Marin made the announcement at a joint news conference at the Presidential Palace in Helsinki.

The Finnish Parliament is expected to endorse the decision in coming days, but it is considered a formality.

A formal membership application will then be submitted to NATO headquarters in Brussels, most likely at the some point next week.

Germany has taken all preparations for a quick ratification process should Finland and Sweden decide to apply for NATO membership, Foreign Minister Annalena Baerbock has told reporters on a second day of talks with her NATO counterparts in Berlin.

"Germany has prepared everything to do a quick ratification process," she said, adding that ministers had agreed at a dinner on Saturday that there should not be grey zone between the time they apply and the time they join.

"If they decide to join they can join quickly...We must make sure that we will give them security guarantees, there must not be a transition period, a grey zone, where their status is unclear," she said.

She was referring to the ratification period that can take as long as a year, during which the Nordic countries will not yet be protected by NATO's Article 5 which guarantees that an attack on one ally is an attack on all.

8:07am: Sweden's ruling party poised to back NATO bid

Sweden's ruling Social Democrats are poised on Sunday to come out in favour of the country joining NATO, paving the way for an application soon after abandoning decades of military non-alignment in the wake of Russia's invasion of Ukraine.

Prime Minister Magdalena Andersson's Social Democrats, the biggest party in every election for the past century, has held internal debates over the past week over dropping a long-standing opposition to NATO membership.

With party leadership having said it will decide on Sunday, and widely expected to drop its opposition, support for joining the alliance would command a broad majority in Sweden's Riksdag with much of the opposition already in favour. A formal application by Andersson's minority government is very likely to follow.

"Under the current conditions, Russia is unlikely to dramatically accelerate its rate of advance over the next 30 days," the British military said in a regular Twitter bulletin.

"Despite small-scale initial advances, Russia has failed to achieve substantial territorial gains over the past month whilst sustaining consistently high levels of attrition," said the post adding that, "Russia has now likely suffered losses of one third of the ground combat force it committed in February."

A missile strike hit some military infrastructure in the western Ukrainian region of Lviv early on Sunday, the region's Governor Maxim Kozitsky said in a post on his Telegram messaging app.

"There is no information about dead or injured at this hour," Kozitsky said. "The extent of the destruction is being clarified."

"Our courage impresses the world, our music conquers Europe!" Zelensky wrote on Facebook early Sunday, praising the Kalush Orchestra after they beat out 24 other competitors.

The group's entry "Stefania" – which was sung in Ukrainian – fused rap with traditional folk music and was a tribute to band frontman Oleh Psiuk's mother.

"I thank the Kalush Orchestra for this victory and everyone who gave us your votes! I am sure that the sound of victory in the battle with the enemy is not far off," he added.

It is the third time that Ukraine has won the annual competition.

NATO deputy chief 'confident' of finding consensus on Finland, Sweden membership
NATO is confident that it can overcome objections by Turkey and quickly admit Finland and Sweden, its deputy chief said…