Judges handed down verdicts on Wednesday to 20 men accused over the November 2015 terrorist attacks in Paris that left 130 people dead, wrapping up the biggest trial in modern French history.

Salah Abdeslam, the lone survivor of a 10-man jihadist unit that brought terror to the French capital, was sentenced to life in prison for his role in the 2015 bombings and shootings across Paris that killed 130 people in the deadliest peacetime attacks in French history.

Following a marathon trial that lasted over nine months, the special court also convicted 19 other men for their involvement in the assault claimed by the Islamic State (IS) group.

Abdeslam was found guilty of murder and attempted murder in relation to a terrorist enterprise. The court found that his explosives vest malfunctioned, dismissing his argument that he ditched the vest because he decided not to follow through with the attack.

His sentence, the toughest under French law, has only been pronounced four times in France – for crimes related to rape and murder of minors. It leaves him with only a slim chance of parole after 30 years.

Among the other defendants, 18 were given various terrorism-related convictions and one was convicted on a lesser fraud charge. They were given punishments ranging from suspended sentences to life in prison.

"It's a balanced verdict, harsh for some, less so for others. It's called justice," said Gérard Chemla, a lawyer representing several plaintiffs at the trial.

François Hollande, the former French president who testified in court in November, hailed an "exceptional" and "exemplary" trial. "France has shown that our democracy can be strict without calling into question its rules and its principles," he added.

The men on trial besides Abdeslam were suspected of offering mostly logistical support or plotting other attacks. They included Mohamed Abrini, who admitted to driving some of the Paris attackers to the French capital. The court handed him a life sentence with 22 years as a minimum term.

Also on trial was Swedish citizen Osama Krayem, who was identified in a notorious IS group video showing a Jordanian pilot being burned alive in a cage. He was sentenced to 30 years in jail and ordered to serve two thirds of it behind bars, as was fellow jihadist Sofian Ayari, a Tunisian. The pair were suspected of planning an attack on Amsterdam airport.

Mohamed Bakkali, a Belgian-Moroccan, was handed the same sentence for his “fundamental role” in preparing the Paris attacks.

A trial unlike any other

By any measure, the Paris attacks trial was unprecedented in scale and complexity, reflecting the enormity of an atrocity that sent shockwaves through the country and beyond.

The investigation took six years and its written conclusions stretch to 53 metres (174 feet) when lined up. Hearings lasted more than nine months, accommodated in a specially-built courtroom inside the 13th-century Palais de Justice in central Paris, a soothing wood-framed construction with chairs and benches for almost 600 people.

“We will have to be patient,” warned from the onset the presiding judge, Jean-Louis Périès, whose adroit balance of authority and bonhomie helped ensure the titanic trial unfolded without incident.

The marathon trial provided a cathartic moment for survivors and relatives of the dead, many of whom voiced their grief in harrowing testimonies that stretched over several long weeks. Around 450 plaintiffs – roughly a quarter of those registered for the trial – took the stand to recount their ordeals, sometimes gasping for air, their voices trembling.

Never before had a courtroom given so much time and space to the anguish of those who lost a loved one. Some would later describe how the trial helped them piece together the fragments of their shattered lives.

“When the trial started, it was really a leap into the unknown. Now we can only be relieved at how it unfolded,” said Arthur Dénouveaux of the victims’ association Life for Paris. The trial will “stand as a landmark for justice”, added Philippe Duperron of the association 13onze15, whose son was killed in the Bataclan concert hall.

While several of the accused addressed words of sorrow and repentance to the victims, most remained tight-lipped when quizzed on their roles in the attacks – much to the dismay of prosecutors and plaintiffs yearning for answers.

More than nine months of hearings failed to shed light on an alleged plot to stage a simultaneous attack at Amsterdam’s Schiphol airport on Nov 13. It also failed to determine the origins of the six Kalashnikov rifles found at the scenes of the Paris attacks. The court was left to piece together the fragmentary and sometimes unconvincing accounts of anonymous Belgian investigators testifying by video link.

Why Abdeslam, alone of the 10-man commando that sowed terror on the streets of Paris, used neither a Kalashnikov rifle nor his explosive vest on the night of the attacks remained the biggest unsolved riddle as the trial wrapped up.

In closing remarks, Abdeslam told the court that he was a last-minute add-on to the group. He said he “renounced” his mission to detonate his explosives-packed vest in a bar in northern Paris the night of Nov. 13, claiming he did so “out of humanity”.

The man who began the trial vociferating his support for the IS group ended it with a tearful plea for clemency, presenting his “condolences and apologies” in court. His apparent change of heart raised just as many questions as it answered, but to many of the victims such considerations were a secondary matter.

“A trial cannot answer all questions,” said Duperron of the association 13onze15. “Of course Abdeslam didn’t say everything he knew. The sincerity of all the accused is in doubt. But the important thing is that the trial took place and the accused were able to listen to the victims. Above all, the trial has helped each of us to move on.” 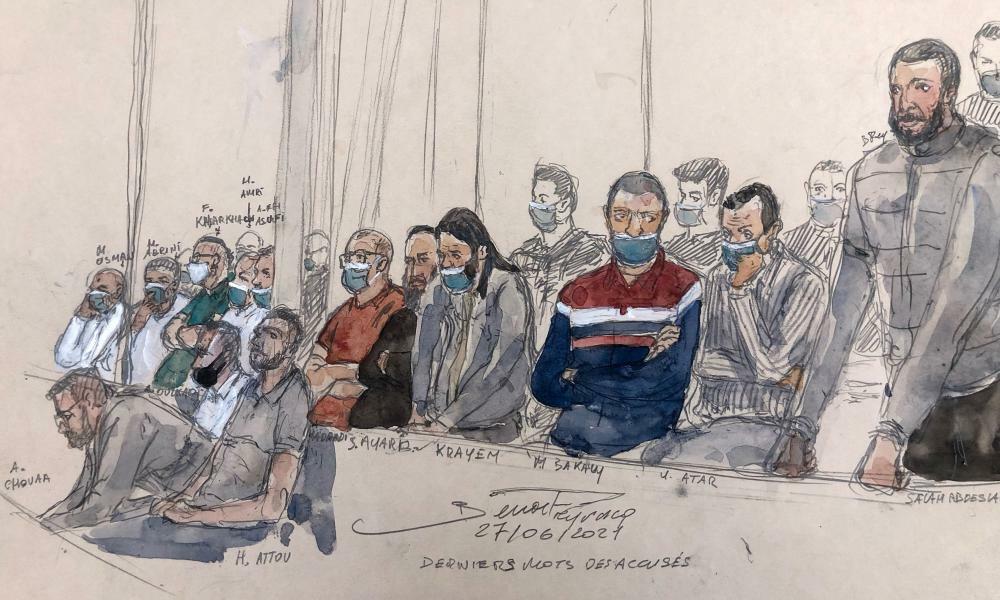 Paris attacker Salah Abdeslam found guilty of murder and jailed for life
Abdeslam was only survivor of 10-man terrorist unit that struck in city, killing 130 people, in 2015

Radio France Internationale
20 men are convicted in the 2015 Paris terror attacks; one sentenced to life in prison

A criminal court on Wednesday imposed a lifetime prison sentence without any possibility of parole on Salah Abdeslam, the only…