Ruben Östlund picked up the top prize at the 75th Cannes Film Festival on Saturday for his “Triangle of Sadness”, a satire of the super wealthy set on a luxury cruise liner, joining the elite club of two-time Palme d’Or winners.

Five years after triumphing at Cannes with “The Square”, which poked fun at the contemporary art world, Östlund has expanded on the same format with another biting satirical comedy, this time taking aim at the shallowness and entitlement of the obscenely rich. The “Triangle of Sadness” is named after the V-shaped frown lines that appear between eyebrows with age or stress. It prompted howls of laughter from the audience during its premiere at Cannes’ Grand Théâtre Lumière.

“We had one goal to really try to make an exciting film for the audience and bring thought-provoking content,” said Östlund, 48, as he accepted the coveted award at a gala ceremony on the French Riviera. The world’s glitziest showcase for the movies was hosting its first full-scale edition after the pandemic forced a no-show in 2020 and a scaled-back July gathering the next year. Inevitably, the war raging in Ukraine loomed large over the proceedings, framing the conversation just as it influenced the line-up of films.

Ahead of the festival, jury head Vincent Lindon had expressed his preference for “films that say something about the world they’re made in”. His fellow jurors duly delivered with a politically-minded Palme d’Or that also reflected our world’s taste for cycnical sarcasm. Östlund’s latest cringe-worthy satire, starring Harris Dickinson, Charlbi Dean and Woody Harrelson, was not to everyone’s taste, several critics finding it too heavy-handed and unsubtle. But film critics and jury members seldom think alike.

Denis, who also won the directing prize at the Berlin Film Festival earlier this year, shared her Grand Prix with Belgium’s Lukas Dhont, whose “Close” brought many to tears with its tender, tragic story of boyhood friendship turned sour. At 31, Dhont was the youngest director in the race, 53 years younger than Polish veteran Jerzy Skolimowski, who won the Jury Prize for his donkey-starring fable “EO”, a beautiful tribute to Robert Bresson’s 1966 classic “Au Hasard Balthazard”. That too was a joint prize, shared with “The Eight Mountains” by Charlotte Vandermeersch and Felix van Groeningen, a tale of unspoken feelings between childhood friends that echoed with Dhont’s “Close”.

The festival’s global scope was highlighted in this year’s other prizes, which rewarded the rich and diverse selection of movies from the Middle East and Asia. France-based Iranian actress Zar Amir Ebrahimi took Best Actress for her turn in “Holy Spider” by Ali Abbasi, about a serial killer bent on ridding the streets of prostitutes in Iran’s religious city of Mashhad. Best Actor went to South Korea’s Song-Kang ho, of “Parasite” fame, for his part in “Broker”, a family drama about “baby box” adoptions directed by Japan’s 2018 Palme d’Or laureate Hirokazu Kore-eda.

Another South Korean, “Old Boy” helmer Park Chan-wook, won Best Director for his slick neo-noir “Decision to Leave”, about a detective falling for a murder suspect. Best Screenplay went to Tarik Saleh for “Boy from Heaven”, a thriller set in Cairo's historical Al-Azhar Mosque, which explores crooked ties between religion and politics.

As always, there was dismay and bafflement that others missed out on the prize list, joining a long list of masterpieces dissed by recent Cannes juries – think “Aquarius” (2016), “Burning” (2018) or “Portrait of a Lady on Fire” (2019). This year’s missed opportunity could well be the Tahiti-set “Pacifiction”, a haunting tale of paradise lost by the Catalan master Albert Serra.

In the shadow of war

The catastrophe unfolding in Ukraine was a recurrent theme throughout the festival, which kicked off with a surprise speech by the country’s President Volodymyr Zelensky, who called on the world of cinema to rekindle the spirit of Charlie Chaplin and take on the world’s “Great Dictators”.

Films by and about Ukrainians featured prominently in this year’s line-up, focusing on the devastating toll of wars, both past and present. The screening of “Mariupolis 2” by the late Lithuanian director Mantas Kvedaravičius, just weeks after he was murdered by Russian forces while filming Ukraine’s martyred Mariupol, marked an emotional highlight for a festival that unfolded in the shadow of President Vladimir Putin’s war.

Cannes organisers barred Russians with ties to the government from the festival. But they resisted calls for a blanket boycott of Russian artists, welcoming Kirill Serebrennikov into the main competition for a third time – touting his anti-Kremlin credentials. The move angered many Ukrainian delegates, sparking heated debates about what qualifies as “dissident” art and whether Russian culture should be “cancelled” altogether.

Anti-war protests made for an unusually politicised year on the red carpet, with one woman stripping her clothes off during a premiere to denounce the rape of civilians by Russian forces in Ukraine. In another, unrelated protest, feminist activists lit flares and unfurled a giant banner on the red carpet to highlight the scourge of femicide in France.

As a bastion of arthouse cinema and the world’s most glamorous film fest, the Cannes Film Festival always needs to strike a balance between auteur worship and Hollywood star power – and this year the Croisette hosted more star wattage than it has in years. The festival hit an early peak with the return of Tom Cruise, 30 years after he last walked the red carpet in Cannes. His turn in “Top Gun: Maverick” prompted rave reviews and was saluted with a spectacular fly-past by the French air force.

Cannes 2022 was a bumper year for music-lovers, Baz Luhrmann shaking things up with his splashy biopic “Elvis”. Another rock ‘n’ roll legend, Jerry Lee Lewis, was the focus of Ethan Coen’s first film without his brother Joel, while critics were blown away by an ultra-immersive documentary about David Bowie, “Moonage Daydream”.

Some of the biggest buzz happened outside the main competition, not least with Saim Sadiq’s "Joyland", the first Pakistani film in Cannes’ official selection and a daring portrait of a transgender dancer. It won the unofficial "Queer Palm" for best LGBT film and took the silver-medal jury prize in the festival’s Un Certain Regard sidebar. From the same category, Riley Keough picked up Cannes’ Caméra d’Or for the best first film with her “War Pony”, a coming-of-age story about Oglala Lakota boys who navigate life on their South Dakota reservation.

While the host country picked up little silverware, French films won plaudits for tackling sensitive topics from the immediate and more distant pasts. The traumatic aftermath of the 2015 terrorist attacks in Paris was the focus of Cédric Jimenez’s “November” and Alice Winocour’s “Paris Memories” – one charting the hunt for the perpetrators, the other exploring survivors’ efforts to overcome the trauma. Earlier in the festival, the devastating human cost of war and colonisation was laid bare in Philippe Faucon’s Algerian War film “Les Harkis” and the Omar Sy-starring “Father and Soldier”, about the North African riflemen who were snatched from their homes and forced to fight for the colonial power in the trenches of World War I. 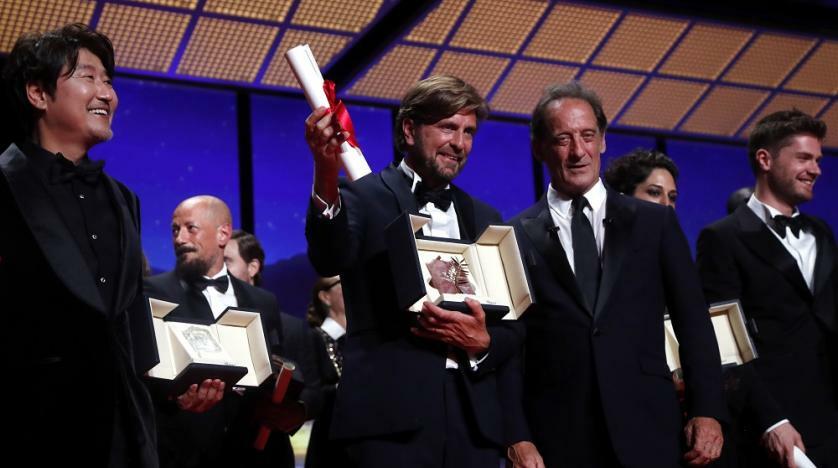 Cannes (France) (AFP) - A viciously sharp satire about class conflict, with an already-infamous vomiting and pooping scene, won the Palme…

The jury, chaired by Vincent Lindon, has unveiled its winners for the 2022 edition of the Cannes Film Festival. Swedish…