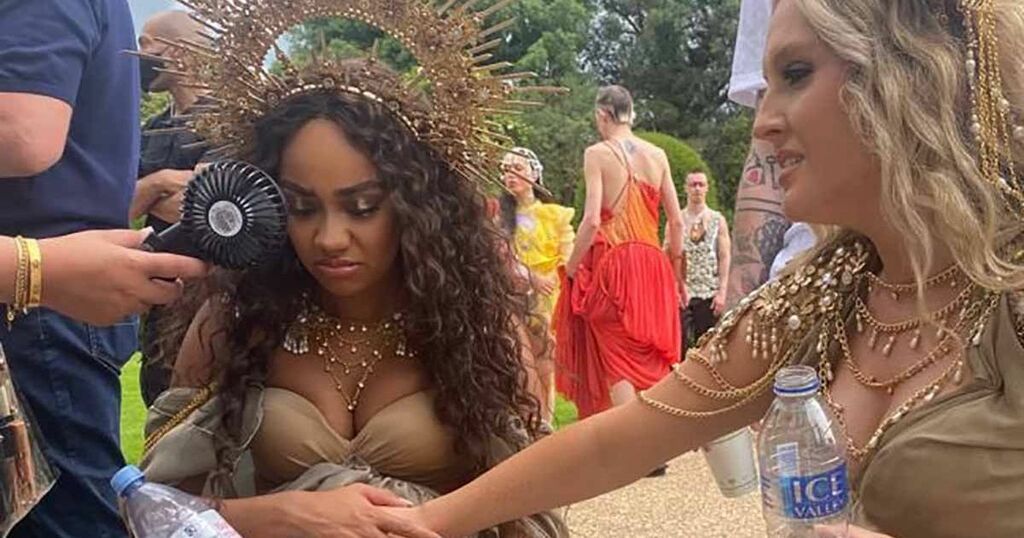 Little Mix have given fans an insight into just how hard they worked while two thirds of the group were pregnant.

As the Brit award-winning group filmed a music video earlier this summer, Leigh-Anne Pinncock and Perrie Edwards were heavily pregnant as they shot scenes for their latest single, Love (Sweet Love).

Taking to social media on Monday, Leigh-Anne, revealed just how gruelling the shoot was while carrying her twins, who were born last month.

"Whose loving Love Sweet Love? We wanted to give you pure goddess energy," the 29-year-old tweeted off the official Little Mix account.

One fan took this as an opportunity to ask the singer about how she found working while almost ready to drop.

"How hard was shooting the video??" the Twitter user asked the mum-of-two.

"The struggle was real," Leigh-Anne replied - adding some laughing-face emojis and a candid behind-the-scenes from the shoot.

In the previously unseen snap, the new mum can be seen looking overwhelmed and hot - as she cradles a bottle of water and someone blows a fan into her glum face.

Bandmate Perrie, also pregnant with her first child, is sat alongside the star - sweetly placing her hand on her friend's bump as she also holds a bottle of water.

Fans were quick to thank the Little Mix girls for their commitment to their art when they could have been on maternity leave.

"Thank you for shooting it, we love it & we appreciate all the hard work you and the girls have done," one replied to Leigh-Anne's latest tweet.

Another wrote: "Aw Leigh thank you again for giving us another great Music Video while being pregnant during a pandemic! Perrie thank you too! That's huge and impressive."

Meanwhile, Leigh-Anne became a mum-of-two as she gave birth to twins with her fiancé Andre Gray, also a footballer.

While filming may have had it struggles for the pregnant pop stars, it appears it was worth it - as the music video for Love (Sweet Love) has wowed fans and critics.

In the latest regal-inspired release, the trio, which includes bandmate Jade Thirwall, are adorned in flowing stone-coloured dresses as they celebrate independence and self-love.

The video sees the Little Mix ladies perched on thrones while entertaining a series of secret admirers who have hunted them down at a lavish estate to try and win their affections.

The award-winning girlband then go on to battle away the male suitors as they belt out empowering lyrics from their latest anthem.

Love (Sweet Love) is the first single from the band's upcoming new album, Between Us - their first recorded as a trio following Jesy Nelson's decision to quit the group in December 2020.

The former Little Mix singer is also preparing to release new music in the coming months.

Following signing a solo record deal earlier this year, the 30-year-old is said to be ready to drop her debut single in the very near future.

The 30-year-old was seen recording what appeared to be a music video on the streets of London last month, and fans have speculated that Nicki Minaj could feature on the singer's first solo venture.