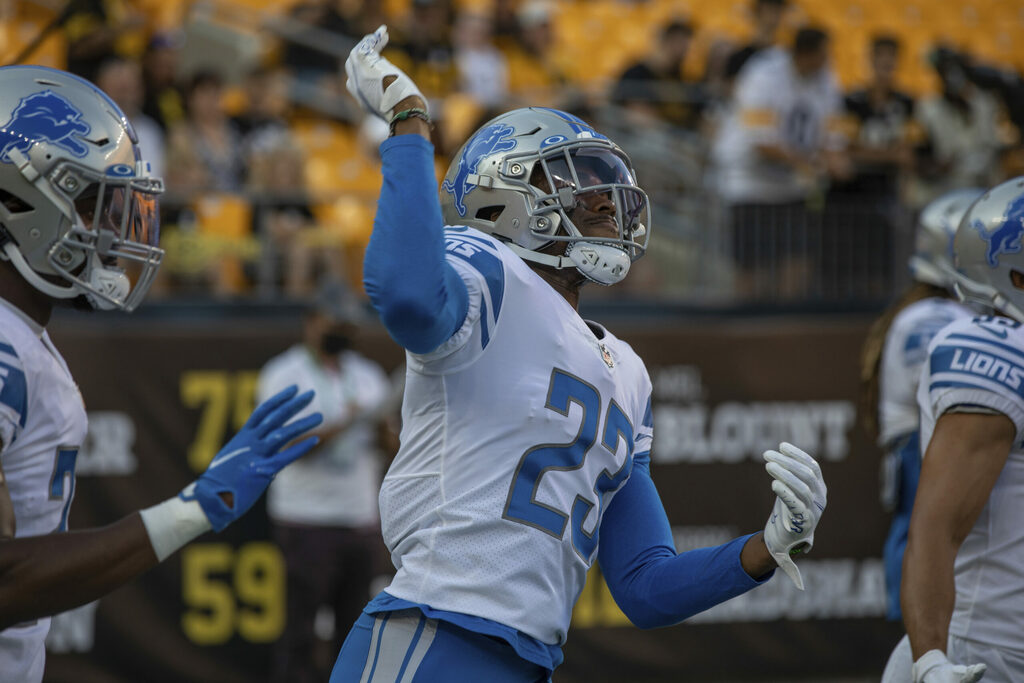 Now that Jeff Okudah has been placed on injured reserve, the Detroit Lions have to replace one of their starting cornerbacks. It will not be an easy task, even if the second-year corner had his struggles. Okudah was not only the Lions’ top corner, he’s also the leader of the unit and had an impressive training camp mastering new coordinator Aaron Glenn’s defensive scheme.

The Lions have a few options to replace Okudah.

The third-round rookie filled in versus the 49ers after Okudah’s injury. Melifonwu has the size and athletic profile to do what the Lions asked of Okudah on the outside.

Head coach Dan Campbell acknowledged in his press conference on Monday that Melifonwu is the likely next man up,

“Look, he’s been working hard, and he quietly has really improved,” Campbell said of Melifonwu. “He’s another guy from spring that has just quietly had a good spring and a good camp. So, yeah, he’s probably—there’s a good chance he’s the next guy up.”

Campbell was quick to mention the two undrafted corners right after talking about Melifonwu. Jacobs and Price each played only on special teams in Week 1.

“We’ve got two other young guys, too, in Bobby Price and (Jerry) Jacobs,” Campbell said. “So, we’re going to put the best combination out there and see where we go. But, listen, it’s next man up and we said that from day one. It doesn’t matter who’s in there, all that matters is who’s in there does what they’re asked to do and does it the very best that they can do it.”

Jacobs, a rookie from Arkansas, is the more natural outside corner, and he’s even more physical in man coverage than Melifownu. The high-energy Jacobs tackled very well in preseason, and that’s something that Okudah has proven to be good at as well.

Price is converting to CB after playing as a safety in college and in his rookie season in Detroit. The Lions like his athleticism and potential, though his very limited experience playing corner could be rife with peril if the team asks too much, too soon from Price.

Veteran Nickell Robey-Coleman is currently on the practice squad. He was a late addition to training camp and didn’t beat out undrafted rookie A.J. Parker for the slot corner role.

Robey-Coleman does have some experience playing outside despite his small stature. The Lions could use his veteran savvy and presence. The issue is the 29-year-old didn’t play well at all in the preseason in the slot, where he’s been at his best throughout his NFL career, and Parker is the future inside.

Campbell made it clear the team will indeed be bringing in another cornerback not currently on the team.

“Well, certainly, we need to add someone just to help us on the overall roster, even from a practice standpoint,” Campbell said. “It’ll be somebody that’s going to help us just overall depth for sure.”
Many of the more prominent names available are not actually able to play right away due to injury issues. That effectively wipes out players like Darqueze Dennard and Gareon Conley. Pending legal issues are a problem with Richard Sherman, who would be far more likely to rejoin the 49ers with San Francisco’s own massive injury issues at cornerback, too.
Some of the veteran free agents who might still have something to offer from a health and schematic standpoint:

It’s just not a great time to need immediate impact help at cornerback.