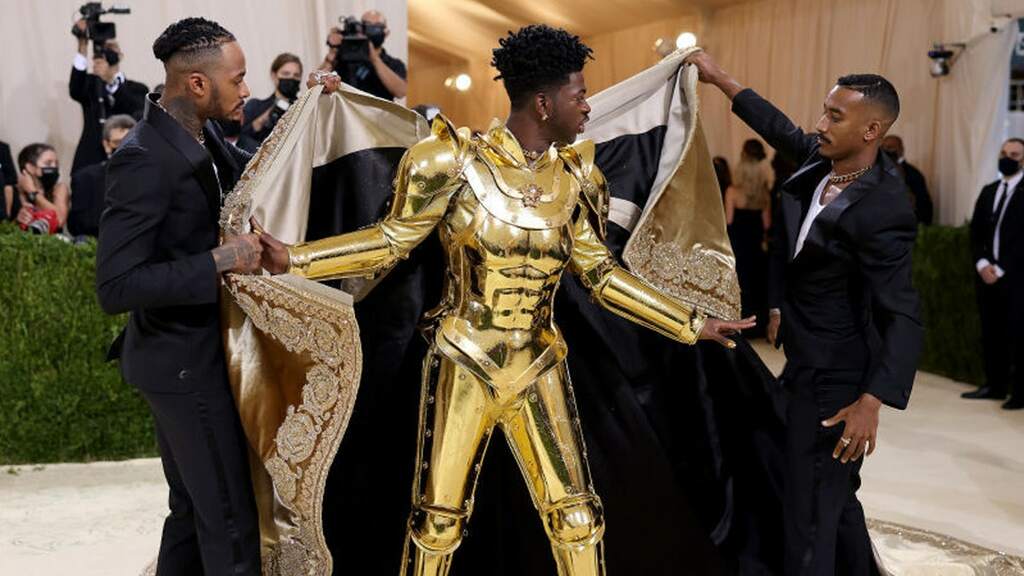 The Met Gala entrances are in full flight, and Lil Nas X has flattened us with not one, not two, but three reveals on the iconic stage.

THREE. We simply do not deserve this.

Lil Nas X backed it up from his stunning turn out and performance at the MTV VMAs yesterday in three golden Versace pieces – continuing on from the lavender piece yesterday. Has anyone checked in on Lady Gaga? Because LNX is definitely coming for the crown of Reveal Queen this year.

His entrance began with a gorgeous, regal moment: a heavy-ass full golden cape that definitely hinted this wasn’t the end of his look for the evening.

He stripped it back for a third time, revealing his final carpet look for the night – a sparkly, encrusted gold bodysuit paired with a pair of Versace stomper platform boots, matching earrings, and a gold choker. A hell of a serve.

I can’t even imagine how fucking heavy this must have been, or how hot Lil Nas X must have been under all that golden garb. I dunno about him by even my ass is a swampy mess just thinking about it.

The internet has understandably lost it’s mind over Lil Nas X’s turn-out for the Met Gala, which definitely could have been three years worth of costumes for the iconic event.

Lil Nas X showed up dressed for the 2018 Met Gala, the 2016 Met Gala, and this year's Met Gala and I love that for him #MetGala pic.twitter.com/gDL5pciOnS

lil nas x is paying tribute to the american culture at the met gala pic.twitter.com/BUqUJrKJj9

lil nas x has the best look/looks at the met gala….i don’t even need to see anything else

THREE LOOKS? IN ONE NIGHT?? FOR HIS FIRST MET GALA??? LIL NAS X SERVES FOR THE GIRLS & THE GAYS pic.twitter.com/y8VyBFV4lW

We’re recapping all the strong looks celebrating American Fashion at the 2021 Met Gala, check it out if you want to see everyone dressed up to the bloody nines on your Tuesday morning.

The post Lil Nas X Gifted Us With A Triple Golden Reveal At The Met Gala & We Have Ceased To Exist appeared first on Pedestrian TV.