Lightning threatens California as fires continue to burn across the state 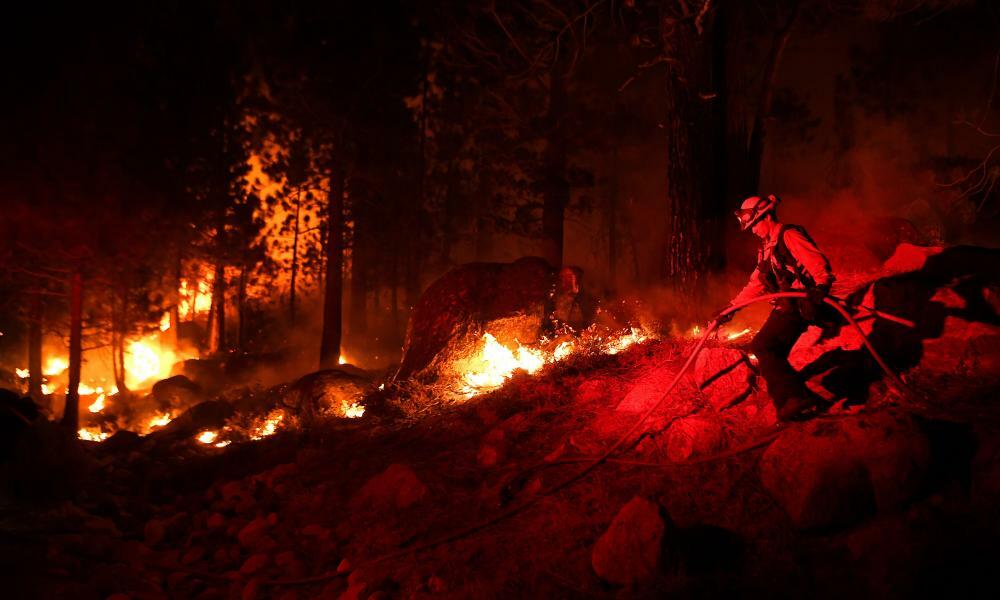 Ominous weather is again threatening areas of California as dozens of fires continue to burn, with hot, dry conditions and forecasted thunderstorms prompting officials to issue warnings through parts of the state’s north-west.

Higher risks of new ignitions remain through Friday, with the possibility of dry lighting and gusty winds further complicating the containment efforts of thousands of firefighters who have battled large blazes for weeks.

“The combination of possible dry lightning as well as strong winds with the dry fuels could lead to critical fire weather conditions,” forecasters with the National Weather Service wrote on Thursday.

Lightning – which was responsible for the starts of the devastating August Complex fires that broke records last year – is especially dangerous in California’s drought-ridden climate, where parched landscapes can cause fires to spread faster and exhibit intensifying behavior that is difficult to contain.

The National Interagency Fire Center (NIFC) also warned of the potential for extreme fire behavior such as pyrocumulonimbus clouds, massive formations generated by smoke and heat that can reach miles into the sky and can even stir up winds, unleash thunder and lightning, or create its own weather. “Plume-dominated wildfire behavior and pyrocumulonimbus development are possible on active large fires in the Sierra into north-east California, central Oregon, and central Idaho,” the department noted.

A National Weather Service heat advisory also stretched down through the Central Valley and into inland southern California, with an excessive heat warning extending eastward across the desert into Nevada.

Across the American west, climate change has caused warmer and drier weather, fueling larger and deadlier wildfires in recent years. The US has spent 57 days at national preparedness level 5, the highest level of risk and preparation for fires as categorized by NIFC. More than 22,000 wildland firefighters continue to battle big blazes, some that have been burning for weeks.

California’s wildfire season has kept pace with 2020’s record-breaking season, and with months left before winter brings relief. Scientists have said weather will continue to be more extreme and wildfires more frequent, destructive and unpredictable. On Thursday morning, 11 large fires were burning in the state, including 3 of top 20 largest fires ever recorded, which still have yet to be fully contained.

The Dixie fire, the largest single blaze California has ever seen, remains active through the northern Sierra Nevada and southern Cascades region and has evaded containment efforts for months. It had already consumed more than 927,320 acres (375,273 hectares) as of Thursday and more than 4,840 people have been deployed to fight the fire, which claimed the life of a first responder and injured three others.

The Caldor fire, burning to the south in the Sierra near Lake Tahoe, prompted unprecedented evacuations last week, but has been increasingly corralled by firefighters, who achieved 53% containment by Thursday.

South Lake Tahoe residents have begun trickling back into the area, including Carl Ribaudo who said that when he fled the Caldor fire more than a week ago, he wasn’t sure he would ever see his home again. “Fire to many is a very distant thing,” he said. “When it is breathing down your highway everything gets real in a hurry.”

He and his neighbors were taking stock of the damage, grappling with the smoky conditions, and clearing the ash from their yards and homes have banded together through the traumatizing experience. “I look at my block and everyone’s just like, shit, we are all here. We dodged a bullet,” Ribaudo said. Other communities weren’t as lucky. More than 778 homes have been destroyed and Cal Fire, the state’s fire agency, report that roughly 24,650 still lay in the fire’s path.

“It was a more emotional experience than I ever imagined for me,” Ribaudo added. “I used to say I live in Tahoe. But I never really realized – this is my home. I don’t just live here. This is my home.”