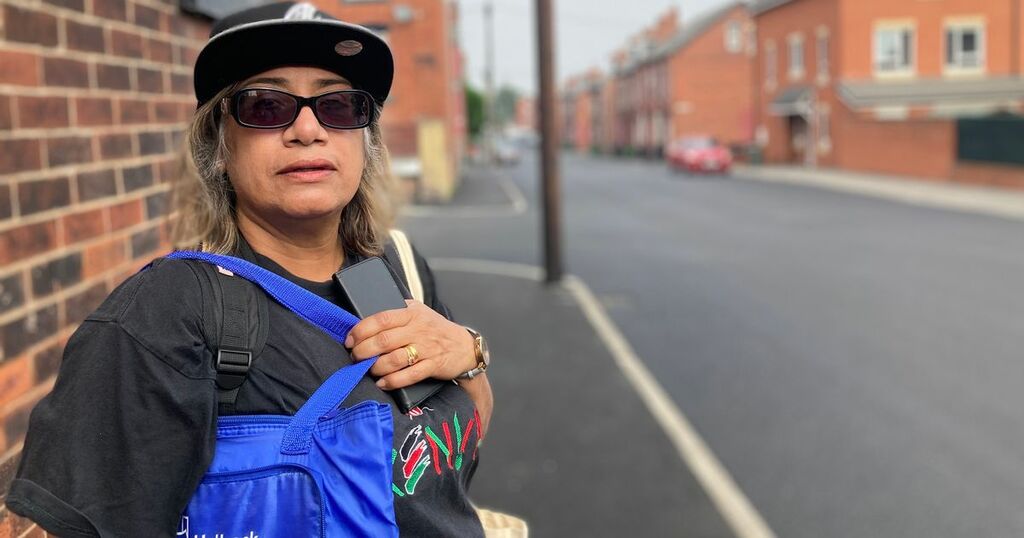 Former nurse Pam Chandra says neighbourhoods such as Holbeck are blighted not only by deprivation and drugs but also by a lack of hope.

The committed Christian believes that Holbeck community activists are doing a wonderful job to help local people but some don't appear to want to help themselves.

Middle-class people have moved into the area with a view to helping those less fortunate, she says.

For news stories about the Holbeck Managed Approach in Leeds, click here

Drug abuse and a 'failed' benefits system, she says, are the root cause of so many problems.

"Some people won't go out of their street; they are territorial."

As a resident of Holbeck, she has first-hand knowledge of the hard work of organisations such as Holbeck Together which provides all kinds of community support services, from food parcels to help with transport.

Although the help is there, many don't access it, it is claimed.

"People feel hopeless - they are on drugs," she says.

"This is the benefits system gone wrong. People are sitting on their backsides doped up. Nobody has pushed them."

On the issue of the sex trade, which has affected Holbeck for many years, Pam is happy that the Holbeck Managed Approach, which permitted prostitution between certain hours on allocated streets, was scrapped.

The so-called 'Managed Approach' has gone but the sex trade continues. Pam is aware of the existence of at least one brothel in Holbeck and says street prostitution hasn't gone away.

"Prostitution is there but that doesn't mean we have to tolerate it...don't do it in front of our kids."

She believes the police need to be more visible, with increased street patrols by officers in uniform.

Holbeck resident Anne Lindsay, 61, said street prostitutes can be seen during the day near a chemist shop on Shafton Lane.

"They gather and walk up and down with virtually no clothes on. I have a granddaughter who is disabled and she has to look at that."

Anne, a senior carer who is currently out of work, no longer leaves the house on an evening and is sick and tired of being approached by kerb-crawlers.

"Are you working? Are you free? What's your price? I've had people shouting vile things at me - it happened two weeks ago. If my son had got hold of them...."

Despite everything, Anne likes living in Holbeck, saying: "There's a lot of people trying to make it better."

"I like the people and the buildings. There's a core of really nice, decent people and they have been s*** on from a great height (by the creation of the Managed Approach). It has taken years to get rid of it - it was absolutely hated."

She says the streets are sometimes littered with condoms, dirty underwear and syringes, although regular road sweeping by the council ensures the rubbish isn't there long.

Residents are fed up with seeing people having sex in public places or in vehicles, she says.

A dad-of-two, who was on the school run to a nearby primary school, said Holbeck's problems stemmed from the drugs trade.

"I get asked if I want to buy drugs. We get gangs coming down from Beeston. The presence of the sex workers doesn't help the situation. I don't think the sex workers will ever go. I have to be very protective of my kids. I have lived here for 15 years so I am used to it. But for new people, I would not recommend it."

Tracey, 50, a grandma of five, said the authorities didn't appear to be interested in doing much about street prostitution.

"I don't have much to say because nothing will get done because the council and police are in charge of it.

"The police drive past while prostitutes are soliciting in the street. They do literally nothing."

Prostitutes have been taking punters for sex in residents' bin yards on terraces off Crosby Street, she says.

"I would not bring a family up around here. It's bad enough having the grandkids coming to visit me.

"We are fed up of it. Anybody who lives in south Leeds doesn't stand a chance - they see us as scum and dossers. Why else do they not help?

"We have people drinking in the streets, a mix of smackheads, prostitutes and drug dealers and working class people. How does this mix - it doesn't.

"Anybody who doesn't do these things is fed up of it."

Punters drive up and down the streets "all night long".

"We don't go to the shop in singles because we get approached by men in cars. I have been approached and asked if I want business.

Daniel, 30, originally from Ghana, has lived in Holbeck for around six years and he enjoys local life.

Bob, 44, joked that he lived in the 'posh end' of Holbeck where a number of new homes have been built.

"Where I live it is nice and quiet. Everyone knows everyone around here."

One man walking along Crosby Street claimed the end of the Managed Zone had led to prostitutes "moving back in the streets up here."

"I have lived here all my life. I think prostitution is worse now."

LeedsLive spoke to one of the sex workers who was sitting on a bench opposite the AFC takeaway on Top Moor Side, beside Holbeck Moor Park.

The 35-year-old woman said she had been beaten up that morning by a man who had picked her up.

She described Holbeck as a "good community when you look past the stigma attached to it".

Asked about the police, she said: "They say if you are around here - the residential area - we will bother you. They say go further down, by the bridge.

"I have had warnings and have been told to leave the area. I have worked here since 2014 and I am discrete about it."

She said residents' complaints could be stressful.

"It (the sex trade) has been going on since they lived here. If you don't like it, then...

"They moved into an area that's known for it."

She said the end of the Managed Approach meant "you can work at what times you want".

"If the police come you get told to move further down into the old Managed Zone."

"It's like a social life and meeting people and having independence."

In a statement, a Safer Leeds spokesperson said: "Through the work of the Safer Leeds Partnership we have seen a lot of positive progress to reduce the impact of on-street sex work on the day-to-day lives of residents and the local community of Holbeck, as well as putting in place continuing support for the often vulnerable women who are engaging in on-street sex work.

"We do of course recognise that there is still a lot of hard work to be done and we remain committed to undertaking that work.

"We’ve also been very clear in terms of the changes we’ve made to our strategy, including those outlined in June 2021, that they would not result in on-street sex work disappearing overnight. This position reflects both the history and on-going complexity of on-street sex work in the area.

"Working closely with partners, we have in place a robust strategic and operational approach to tackling on-street sex work in the area.

"This includes the continuation of a dedicated policing team undertaking proactive patrols, which are supported by Safer Leeds officers and CCTV, and a dedicated mobile phone number that residents can use to raise any concerns.

"A dedicated cleansing team also remains in operation. We are aware of issues that have been raised by some residents living in and around Crosby Street and with our partners we are proactively tackling these issues.

"We will continue to use all steps and powers open to us as deemed appropriate to tackle any instances of on-street sex work, particularly where it takes place in residential areas."

Leeds Council says its 'dedicated cleansing team' continues to operate in the area.

A spokesman said: "In terms of sex litter, our data suggests the number of needles and condoms have reduced in recent weeks."

Residents are urged to contact police to report any instances of intimidating behaviour.

In relation to bin yards, police confirmed they have received four reports of inappropriate behaviour since June.

Safe Leeds said: "To report a concern or issue in relation to on-street street sex work in Holbeck, you can do so in the following ways.

"We would urge any residents that have any issues or concerns regarding sex work in Holbeck to please contact us as soon as possible as this is the quickest way to ensure that we can investigate any issues immediately."