Victoria’s opposition leader, Matthew Guy, says he will not be thrown off course by the federal Liberal party’s near wipeout across Melbourne as he prepares for November’s state election.

The Liberals had banked on a backlash against the premier, Daniel Andrews, in outer suburban seats at Saturday’s election, after several Covid-19 lockdowns. But the strategy backfired, with the party losing its blue-ribbon inner Melbourne seats of Goldstein and Kooyong to teal independents, and Higgins to Labor.

Labor also won the state’s most marginal seat – Chisholm, in Melbourne’s east – from Liberal MP Gladys Liu, and is cautiously optimistic it will wrest the neighbouring seat of Deakin from her colleague, assistant treasurer and housing minister Michael Sukkar.

The Liberal party could be left with only two of Melbourne’s 22 seats: Aston and Menzies.

The result is similar to that of the 2018 state election, which saw the Coalition lose several seats to Labor in the east as well as the once-safe electorate of Hawthorn. It is now left in the challenging position of requiring 18 additional seats at the 26 November election to form government.

Victorian Liberals are split on the party’s strategy for the next six months. Several Guardian Australia spoke to urged Guy to stay the course.

One MP, who asked not to be named so they could speak freely, said the state Liberals were “far more progressive” than their federal counterparts, having backed a net zero emissions target by 2050, vowed to not amend new laws banning gay conversion practices and promised to properly fund integrity agencies.

“I am much more positive about our position, we just need to stay the course, not shit the bed between now and November,” the MP said.

A senior Victorian Liberal figure, who also asked not to be named, said the focus on Andrews was successful in targeted outer-suburban areas in Melbourne’s west.

“It served a very specific purpose and it increased our primary vote, which is what it was designed to do. We’re certainly not resigning from that particular position because it worked,” the figure said.

“We didn’t run the same strategy in those inner, more affluent areas, where Dan [Andrews] was popular, because it wouldn’t work. They were comfortable with the lockdowns and their lives weren’t as dramatically affected by them.”

They said the election was lost largely because of prime minister Scott Morrison’s unpopularity in the state.

Former Victorian Liberal deputy state director turned pollster, Tony Barry, said there was an “anti-Andrews mood in the suburbs” but he doubted the party headquarters “has the capacity to capitalise on it”.

“Matthew Guy can’t do it all on his own,” he said.

“The Victorian Labor party campaign machine is a Ferrari while the Victorian Liberal campaigners are driving a Datsun 180B and knocking over the witches hats in the car park.”

The member for Gippsland, who retained his regional Victorian seat with a 4.5% swing toward him, said the Coalition had been in opposition for 19 of 23 years at a state level.

“As the major partner, the Liberal Party in Victoria is an election losing machine and anyone who thinks the result in November will be any different if they don’t change direction now, is simply kidding themselves,” Chester said.

He said the Nationals had to take some responsibility for the Liberal losses in the city, with the “more extreme views of some colleagues undoubtedly hurting the chances of our city cousins”.

“It was simple and devastatingly effective to say a vote for those moderate Liberals, was a vote for the ‘dinosaurs’ in The Nationals who didn’t believe in climate change,” Chester said.

On Monday, Guy said the federal election result was proof of voter discontent with both major parties.

“The Coalition and the Labor party both obtaining just 33% of the primary vote says there is certainly a lot of frustration within the electorate but also a desire for change,” he told reporters.

“We’ve seen that desire for change in Victoria. Myself and a lot of my colleagues have certainly felt that over the last few months. A frustration with not just the previous federal [Coalition] government but also with the state Labor government.”

Guy said there was proof of anti-Andrews sentiment despite the result, highlighting “double digit” swings against Labor in safe outer-suburban seats, as well as in particular voting booths in the premier’s electorate of Mulgrave.

Guy said rather than move the party to the left or right, he will continue with his strategy.

The Victorian Liberal parliamentary team will also be voting on Tuesday on the expulsion one of the party’s most rightwing MPs, Bernie Finn, though Guy maintains it’s due to his “behaviour not beliefs”. 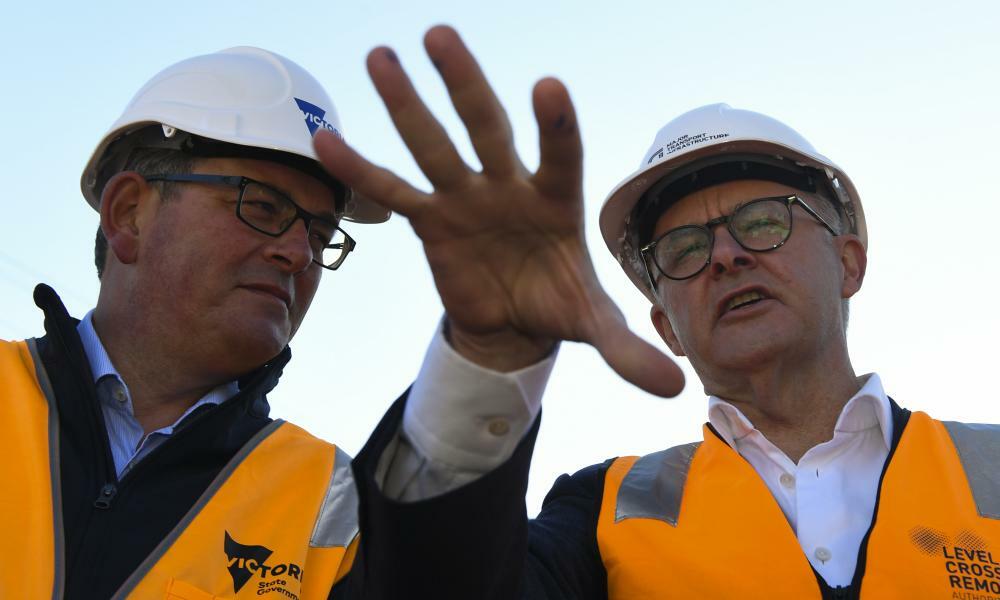 ‘They were having a go at Victorians’: how the Liberals miscalculated the ‘anti-Dan’ election strategy
Liberal strategists believed Victorians wanted to send Daniel Andrews a message. Instead voters swung away from them in several blue-ribbon…

The federal election result is highly problematic for the Liberal Party. Aside from finding itself on the opposition benches for…