The voters of Kooyong in Melbourne’s east have been described as “loud, entitled and privileged” – by their own state Liberal MP.

Writing for Spectator Australia, Smith suggested his seat was a lost cause for the Liberal party, who should forget about winning back heartland inner-city seats for the time being, and instead focus on the suburbs.

Smith, who will retire at the upcoming state election after crashing his luxury car while under the influence of alcohol, gave his successor little chance of retaining Kew in November’s state election, after three neighbouring electorates were lost to Labor in 2018.

“I suspect before this year is out, based on last Saturday’s results, the Liberals will have no lower house representation at all where the party was founded,” he wrote.

While the former shadow attorney general was scathing of the Frydenberg campaign to retain Kooyong and the Coalition’s campaign messaging generally, Smith also wrote that it was “a global phenomenon that wealthy inner-urban elites are voting for the Left”.

“The Liberal campaign in Kooyong had no message, aside from ‘Keep Josh’, but most importantly it said nothing about what the Liberal party stands for that will improve the lives of the people of Kooyong or anywhere else in the years ahead,” he wrote.

This came as Tim Wilson urged his Coalition colleagues not to abandon their position on climate change, telling an industry conference that it was not the main issue that led to their election defeat.

“I don’t think we should go backwards on our position and I don’t think anyone seriously is entertaining that,” Wilson, who lost his seat of Goldstein to the independent Zoe Daniel, told the National Energy Efficiency Conference in Melbourne on Thursday.

“Where our role has to be is really to give the communities that are represented by the Coalition a voice in the conversation – to make sure that they’re not lost, because that’s always been my fear.”

Wilson said he was concerned the Greens, who could hold the balance of power in the Senate, will dictate the terms of the transition to renewable energy without consideration for outer suburban, regional and rural communities.

“I very strongly believe, and still believe, the best way to build that sense of consensus … [and] support was actually under us because we were the ones that could have the conversations with those communities,” he said.

“It’s an extreme challenge, and one we should all be excited about, but we shouldn’t be deluded just how much any change of that structural nature can lead to dislocation.”

He expressed hope that he could continue to be involved in Australia’s climate and energy debate from outside federal parliament.

Wilson was one of several Liberal MPs who lost blue-ribbon seats to independent candidates, who ran community-backed election campaigns on climate, integrity and gender equity.

But he denied the government’s emissions policy, including a target of net zero by 2050 and a 2030 target described as unambitious, led to the losses.

“I think there are other issues that played out very strongly in the election, which made it harder for people to win their seats, including myself, which aren’t related to climate change. That doesn’t mean that it’s not an important part of that, but it was a subset of issues,” Wilson said.

Amid the fierce debate about the future direction of the Liberal party after their election rout, Smith wrote that the party needed to “stop obsessing with the woke causes of inner-urban elites” and turn its attention to the “true forgotten people” of suburbia and rural Australia.

“Swings at this election against Labor in their working-class heartland prove this is where the Liberal party must focus,” he wrote.

“These are the Australians who will bear the brunt of what the ‘teals’ are demanding in terms of emissions reductions by 2030.

“The people of Kooyong, Wentworth, Goldstein, North Sydney and Mackellar aren’t forgotten or quiet. They are loud, entitled, and privileged.

“The future of the great party that Menzies founded was never about the top end of town. It was and will always be the party of John Howard’s battlers.”

Smith, who attended Scotch College where annual fees are about $30,000, pointed to the success of the UK prime minister Boris Johnson at breaking down the “red wall” by winning working-class seats in northern England.

He lamented that students were being “indoctrinated into the new religion of climate change extremism and identity politics” and called for “true believers” to lead the party.

Smith described his upcoming departure from state politics as a “forced retirement”. He was told not to run at the next state poll after last year crashing his Jaguar into a parked car and then into a home in Hawthorn. He returned a blood alcohol reading of 0.131 and resigned from the front bench.

Addressing his constituents last year after the crash, Smith apologised, and vowed not to drink again while in public office. 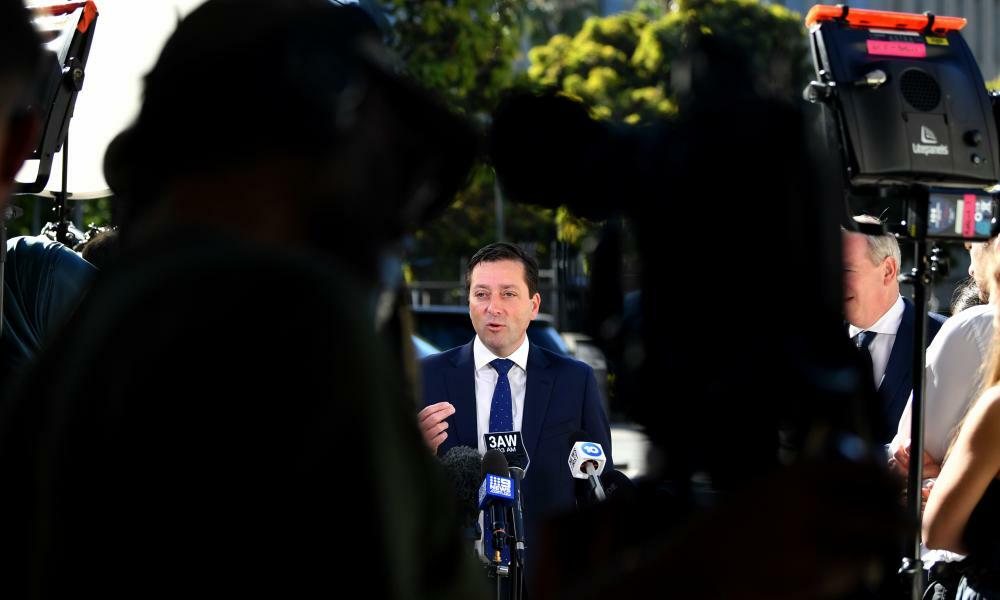 Lost in suburbia: Victorian Liberals search for a base
Analysis: with a state election on the way, the clock is ticking for the Coalition to define themselves