Speculations are flying that certain Liberals have been deliberately spreading transphobic views during the federal election campaign to divide voters and create a national trans culture war via the mouthpiece that is Katherine Deves.

Political author and commentator for the Age Niki Savva reported in Thursday’s opinion section members of the Liberal party anonymously confirmed the theory and said Deves’ election campaign for the seat of Warringah in New South Wales was actually being run by the Prime Minister’s office (PMO). These claims were denied by the PMO, but would be HUGE if true.

This brewing trans culture war is something people have been talking about since Scott Morrison named the outspoken transphobe his “captain’s pick” last month, so let’s get everyone up to speed on what’s happening here before we break these wild claims down.

It all started with Deves’ selection to run in the upcoming election despite her many comments and tweets in the past, which have been widely called transphobic.

Morrison originally excused all those resurfaced comments in mid-April on the basis that she had since apologised for them. But on Monday Deves effectively retracted her apology and doubled down on her stance that trans people who’d undergone gender affirmation surgery were “surgically mutilated”.

Basically she wrote the term in a since-deleted tweet, apologised for it and then came out and said it was the “correct terminology” — which is blatantly, unmistakably false.

Morrison quickly changed his tune and supported the retraction of her apology because he said her claims were substantiated.

At the same time Morrison was reiterating his commitment to the Religious Discrimination Bill which would allow students to be expelled based on their gender.

There’s a good argument that he’s playing the game here, but now the Age has published an opinion piece that reported senior Liberals said Morrison’s given up on trying to win moderate Liberal voters after he’s flailed so much with women’s rights in the past 12 months and is instead going hard on the far-right, Christian or conservative voters.

It also reported that three NSW Liberal sources said Deves’ campaign for Warringah is being run out of the prime minister’s office with Morrison’s own chief political adviser Yaron Finkelstein playing a key role.

A spokesman for the PM rejected these claims however and said “the PMO (prime minister’s office) is not involved in Ms Deves’ campaign.”

Another Liberal reportedly claimed to the Age (whose publisher, Nine Entertainment Co., owns this publication) Deves’ TV interview in which she took back her apology was set up deliberately to bring the issue back into the spotlight so the and that the PM banked on getting asked about it at his next press conference.

He was, and he eloquently said “I am absolutely pleased that I’ve been able to recruit and we’ve been able to appoint strong female Liberal candidates that won’t just run with the pack when it comes to issues, but will actually stand up for what they believe in. That’s what being a Liberal is all about.”

The PMO denies its involvement or tactics, however it’s still a fucking huge allegation because, if true, it would prove that all this transphobia is calculated. That is, they know it’s harmful but they’re doing it anyway.

Good to see the strategy’s finally been published in MSM…as many as possible need to know the malevolence of this divisive PM before 21 May. That said, polls suggest most Aussies have turned away from him for a multitude of reasons. Time’s up. #ausvotes

Sadly it’s one of the oldest political tricks in the book.

Morrison did the same thing when he voted against same-sex marriage in 2017 and we saw the tactic again in 2019 when he refused to condemn Israel Folau’s homophobia.

It’s also arguably how the Coalition came to power in 2013 by creating and cultivating fear of both refugees (remember how they called them “boat people”?) and the changes necessary to move away from fossil fuels. While the scientific community and anyone smart enough to listen was freaking out about the catastrophic effects of climate change, Tony Abbott won the election because he convinced enough Australians that a tax on carbon was the real threat to life as they knew it.

At the end of the day what we know to be true here is trans people are suffering during this election campaign. The more hate speech they hear, the more their lives and rights are debated on the campaign trail, by the media or in public discourse, the more damage is done every day to people’s mental health. 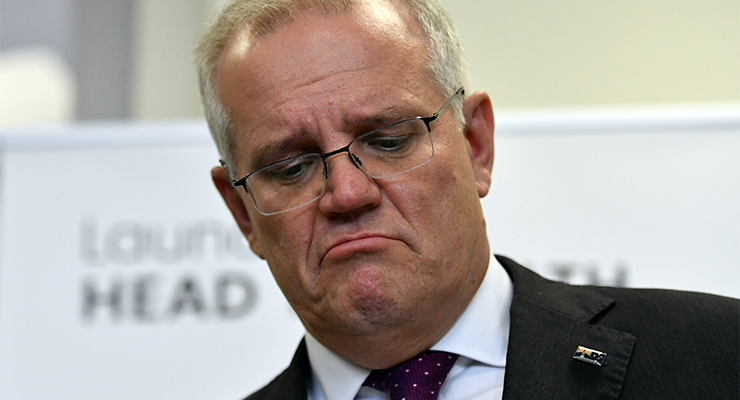 Backbenchers give Morrison more to worry about in key marginals
It’s been another difficult day for the government, battling bad polling, infighting, and gaffes from key MPs.

Is Katherine Deves the victim here? Australia’s most powerful people would certainly like you to believe she is.