The south-west Victorian seat of Wannon remains in Liberal hands, but there's more to the story in the traditionally safe blue ribbon electorate.

Incumbent Dan Tehan has held the seat, which has been Liberal-held since the 1950s, since 2010.

The party is set to retain the seat, however independent Alex Dyson is rocking the boat: for the first time in the seat's history, the race is between a Liberal and an independent.

"The Liberals will still win the seat, but it's indicative of what has occurred in a lot of electorates across the country," Mr Green said.

"I can't see how the Liberal Party doesn't win."

That's why the Wannon count was stopped and restarted — something that rarely happens in an election.

"It's unusual but it usually happens when it's unclear who the final count of preferences will be between," Mr Green said.

"To do an indicative preference count you have to be certain who's finishing first and second and it was unclear who was finishing second.

"So, they did what's called a three-candidate throw to try and determine whether the preferences of other candidates would play a part in determining who finishes second and third.

Mr Green said he had expected the Liberals to claim victory in Wannon by now.

"I'm quite surprised, I presume Dan Tehan is just waiting for someone else to concede they can't win.

"It's pretty clear that Dan Tehan has won the seat."

So how does counting work?

The AEC estimates the top two candidates, however, if it becomes obvious that the estimated top two in a contest are in fact not the top two based on the votes, the count is stopped.

This is what happened for Wannon, as it did for a number of House of Representatives contests.

Further counting on Wednesday morning confirmed it was between the Liberal and the independent.

"What's really important is that the vote always follows the numbers on the ballot paper. If people are thinking we're skipping preferences that's not the case, we're just trying to give as early an indication of who will win the seat as possible."

So far, no candidate has conceded defeat or claimed victory in Wannon.

Roughly 80 per cent of votes have been counted, with results due in two weeks.

To see Wannon play out between the sitting Liberal MP and an independent is a "very unusual outcome" for Dr Geoffrey Robinson, a senior politics lecturer at Deakin University.

"Although the Liberal Party is probably going to win the seat quite comfortably after the allocation of preferences, it's certainly a closer margin than has ever occurred in the seat in several decades," Dr Robinson said.

Mr Dyson won the election day vote in Warrnambool,  the first time in decades the Liberal Party failed to win the city.

Backed by Climate 200 and the grassroots Voices for Wannon group, Mr Dyson has run an unconventional campaign which has seen him rack up more than 20 per cent of the primary vote so far.

It was the second time the comedian and former ABC triple j breakfast presenter had contested the seat, after attracting 10 per cent of the primary vote in 2019.

During this campaign, Mr Dyson made headlines and gained attention on social media by using humour to draw attention to the poor state of the region’s roads.

The smaller towns in the electorate's hinterland were generally friendly territory for the Liberal member, but the towns along the Shipwreck Coast swung heavily for Mr Dyson.

He said any challenger to the Liberal Party faced an uphill battle in Victoria's wealthy Western District, but the decline in the Liberal vote along the coast may make for an interesting state election later this year.

"We've seen the provincial cities in Victoria have really been a disaster areas for Liberal Party in recent years, like Bendigo, Ballarat and Geelong, and I think we're seeing some echoes of that in Warrnambool as well in terms of the strong vote for Alex Dyson," Dr Robinson said. 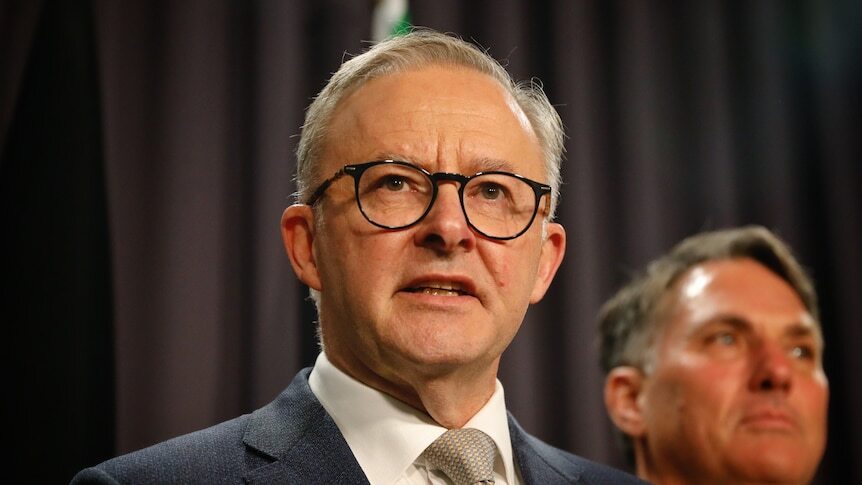 ABC News
One subscription that gives you access to news from hundreds of sites
From Barnaby country to Labor's heartlands: what the ACM papers say

With 73% of enrolled voters counted, the ABC is calling 73 of the 151 House of Representatives seats for Labor,…