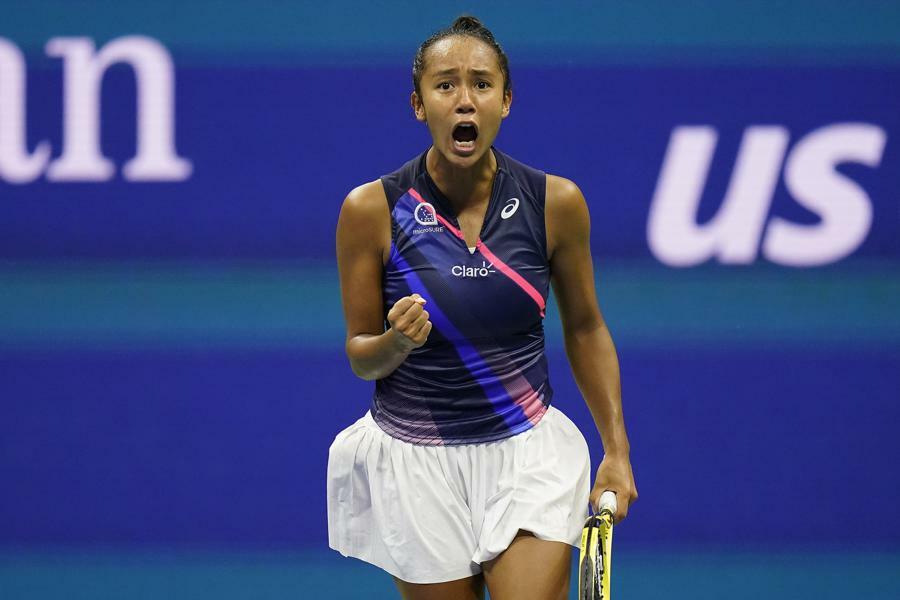 For the first five games of her maiden Grand Slam semifinal, it looked like 19-year-old Leylah Annie Fernandez might simply be overpowered by world No. 2 Aryna Sabalenka.

The 23-year-old Sabalenka dominated from the baseline and took a quick 4-1 lead in the U.S. Open semifinal. It appeared she might put a sudden halt to Fernandez’s magical run that had captivated the New York crowd, including Brooklyn Nets coach Steve Nash, a fellow Canadian who sat in Fernandez’s box for the final.

But the feisty left-hander — as she has done here for close to two weeks — showed poise and power that belies her age and roared back to win the match, 7-6(3), 4-6, 6-4 in 2 hours, 21 minutes, to advance to the all-teenage U.S. Open final on Saturday afternoon.

In the final, she will play fellow teenager Emma Raducanu of Britain, who destroyed Maria Sakkari of Greece in straight sets for her ninth straight victory without dropping a set. The winner will take home $2.5 million and the runner-up $1.25 million. Fernandez had earned about $374,000 in 2021 entering the U.S. Open.

Asked how she got to the final, an exhuberant Fernandez told ESPN’s Pam Shriver on court: “I have no idea. I would say it’s thanks to the New York crowd. They never gave up for me, they fought for me. So thanks New York, thanks to everyone.”

It was Fernandez’s third victory over a top-5 player at this tournament, including wins over four-time major winner and defending champion Naomi Osaka in the third round and No. 5 Elina Svitolina in the quarterfinals. She also beat three-time Grand Slam champ Angelique Kerber in the fourth round.

Fernandez is the youngest woman since a 17-year-old Serena Williams in 1999 to beat three top-5 players at a major. Serena toppled Monica Seles, Lindsay Davenport and Martina Hingis en route to the crown in 1999. Hingis and another teenage sensation, Tracy Austin, both watched from the stands as Fernandez beat her latest victim.

Fernandez literally came out of nowhere during this run. Before this her biggest showing was winning the title at the Monterey Open in March, and reaching the final in Acapulco in 2020.

In the decisive third set, the players traded breaks before Fernandez held for a 5-4 lead on a service winner, yet again pumping her fist toward her player box.

Serving at 4-5, Sabalenka double-faulted twice (to bring her total to 10 for the match) to give Fernandez triple-match point. Sabalenka hit a forehand long and Fernandez fell to the ground bfeore coming to net and shaking hands.

After fighting back to force a first-set tiebreak, Fernandez got down a quick 2-0 in the breaker. But she won seven of the next eight points as Sabalenka gifted Fernandez two points with an overhead smash long as the crowd roared and a double fault to fall behind 3-6. On set point, Fernandez hit a serve winner, the crowd erupted and Eric Clapton’s “Layla” began to blare in the stadium.

In the second set, Fernandez appeared to tire after taking a 3-2 lead. Sabalenka broke Fernandez for.a 5-4 lead when Fernandez hit a backhand long. Sabalenka then closed it out with a serve and volley to even the match at one-set all.

Fernandez credits Nash, who loves to play tennis when he’s not coaching Kevin Durant, James Harden and Kyrie Irving, with serving as “inspiration.”

“It’s a huge inspiration,” she said. “I remember my dad used him as an example once for a whole month, telling me we have to fight hard just like Steve Nash. So it’s an honor to have you here cheering for me/ Hopefully we can have a tennis match, too.”

Fernandez’s coach and father, Jorge Fernandez, traveled to New York from Florida for the semifinal but was not in the stadium, preferring to watch on TV. Her mother, Irene, has been a steady presence in her player box.

Said Leylah after the quarterfinal: “My dad told me so many things but today he told me to go out there, have fun, fight for every point. Today’s your first quarterfinals, don’t make it your last. Fight for your dream.”

Now the dream continues into the final — where she is one more win from the title.