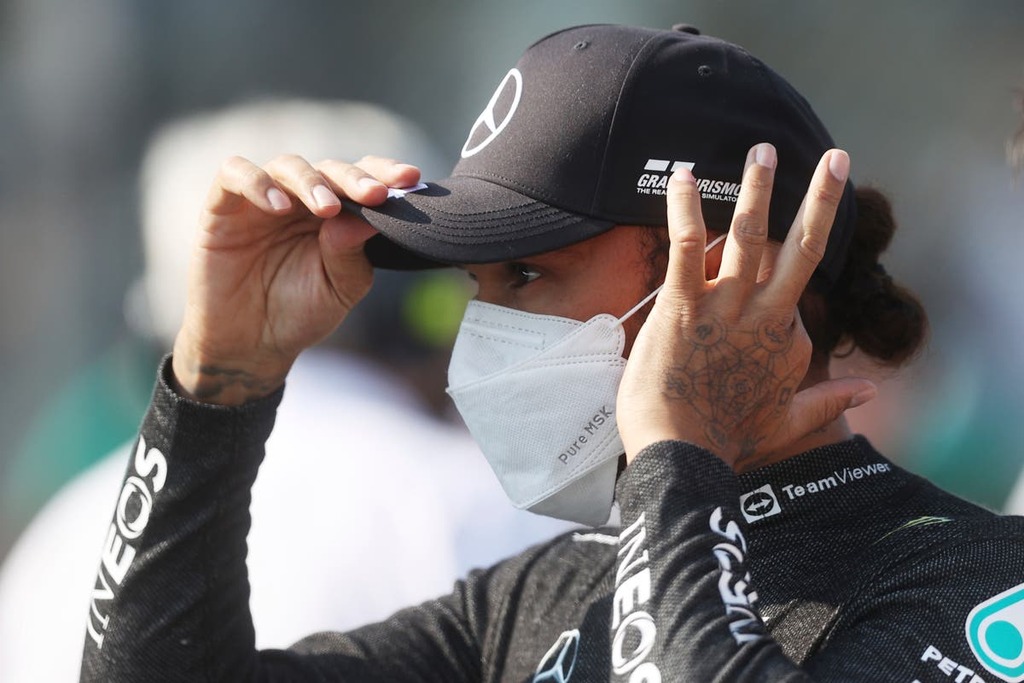 Red Bull’s Verstappen increased his title advantage over Hamilton from three to five points, and he will also line up on pole for Sunday’s main event, with Bottas demoted to the back of the grid for taking on his fourth engine of the campaign – one more than is permitted under the rules.

Not only did Hamilton fail to score, but he will now have his work cut out on Sunday with a grid position of fourth – promoted one spot following Bottas’ penalty – and both Daniel Ricciardo and Lando Norris between him and Verstappen.

“You saw the pace of the Red Bull,” said Hamilton.

“I don’t know if Max was faster than Valtteri but now he is on pole it should be an easy win for him. For me, I have just to try and get past these McLarens.”

Hamilton, 36, has tasted victory just once in his past nine appearances – his controversial win at July’s British Grand Prix – and he heads into the 14th round of a scheduled 22 on the backfoot after his sluggish start.

The world champion staggered away from his marks and was gobbled up by Verstappen, Norris, Ricciardo and Pierre Gasly on the 430-metre dash to Variante del Rettifilo.

Heading into the opening chicane, Hamilton was the unwanted meat in a Gasly-Norris sandwich, and the Mercedes driver cautiously navigated the opening two bends.

He dropped to sixth before Gasly ran over his own front wing – damaged after bumping Ricciardo’s McLaren – and slammed into the wall at the Curva Grande.

The French driver was unharmed in the accident, but the safety car was deployed as his wrecked AlphaTauri was removed from danger.

By lap four, the sprint was ready to restart and Bottas made no mistake in dropping Verstappen following a fine exit from the Parabolica.

As Bottas galloped into the distance, Hamilton could make no impression on Norris.

He spent the following 14 laps on the back of Norris’ gearbox, but the Mercedes-powered McLaren proved too quick in a straight line as Hamilton failed to cause his countryman any real problems.

Bottas, this week dropped by Mercedes for 2022, took the chequered flag 2.3 seconds clear of Verstappen, with Hamilton a distant 20 secs adrift of his team-mate.

Formula One’s second sprint race was a placid affair with motorsport boss Ross Brawn admitting he was surprised by the lack of overtaking at the Temple of Speed.

A third sprint event is set to be trialled at November’s Brazilian Grand Prix before a decision is taken on whether to tinker with the concept in 2022.

The idea of a reverse-grid race is again on the table. Under the latest proposal, Friday’s qualifying would set the order for Sunday’s Grand Prix, with the starting grid for Saturday’s race reversed.

A greater number of points would also be handed out for the sprint, with the top three drivers only currently rewarded.

“We spoke to the drivers at Silverstone and some felt there should be more reward and more jeopardy in the sprint,” said Brawn.

“If we are doing that, then maybe a standalone event is a consideration.

“But we have to be conscious that we don’t want gimmicks and to cannibalise, or affect the integrity of the sport. There is a difficult balance but there is definitely potential there, too.”